If Crimea is Ukraine, then take real measures to defend Crimean Tatar political prisonersSentsov: Whenever you think of friendship with Putin and Russia, remember the 13,000 Ukrainians killed and hundreds imprisonedBenefits of PACE ‘dialogue’? Dramatic increase in number of political prisoners in Russia & occupied CrimeaNo ‘normalization’ while Russia is still holding at least 87 Crimean Tatar and other Ukrainian political prisonersRussian activist faces criminal charges for picket with a flag of Ukraine in support of Crimean Tatars#StayHome and Help Russia’s Ukrainian Political Prisoners held in dangerously unsanitary conditionsThe price of PACE capitulation to Russia: Soaring number of Crimean Tatar and other Ukrainian political prisonersDeath Sentence for their faith and civic activism in Russian-occupied Crimea?Russia strips three Crimean Tatar lawyers of their licence to prevent them defending political prisonersRetired Ukrainian naval commander abducted, tortured and taken to Russian-occupied Crimea ‘for trial’Russian horrific castration of Ukrainian POW was about terror and preventing own soldiers from surrendering Russian prisoners offered big money and ‘amnesty’ to kill for Russia in Ukraine Effective death sentence against veteran Crimean Tatar activist for opposing repression in Russian-occupied Crimea Missing persons and enforced disappearances in the Kherson Region (24 February-24 June 2022)Crimean Tatar journalist detained on charges of ‘discrediting Russian army’ and jailed for "showing resistance"Russian proxy ‘Donetsk republic’ threatens foreign defenders of Ukraine will be executed, with families not told whenRussia copy-pastes first attack on Crimean Tatar activists after 4 years for new 13-year sentences After violently seizing Crimea, Russia accuses peaceful Crimean Tatars of ‘terrorism’ for defending political prisoners Patterns of Resistance are changing. A Digest of Protests in Russia (17-24 June 2022) Russia steps up abductions for torture and ransom in occupied Zaporizhzhia oblast
• Topics / Victims of political repression 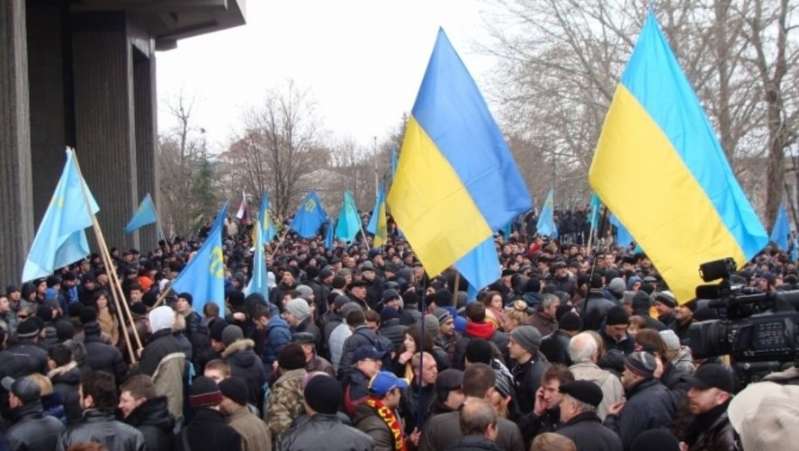 26 February is marked in Ukraine as the Day of Crimean Resistance to Russian Aggression.  It was on this day in 2014 that Russia had hoped to achieve a coup in Crimea, presenting its annexation to the world as a vote in Crimea’s parliament to change the peninsula’s status.  The elaborate ploy failed, largely thanks to the Mejlis, or self-governing body, of the Crimean Tatar people and the huge demonstration that they called in the square outside Crimea’s parliament.  The failure of this plan prompted Moscow to order the deployment of Russian soldiers early the next morning.  Despite little will from the international community to take real measures against Russia, the involvement of Russian military made sanctions and international refusal to recognize the land-grab inevitable.

It is impossible to overstate the vital role that Crimean Tatars played in upholding  Ukraine’s territorial integrity on that day, and since.  It is to a large extent because of this firm stand that they have suffered by far the most from Russian occupation and it is deeply galling that Ukraine’s leaders are now placing the existence of Crimean Tatar TV ATR, a vital source of information for all Ukrainians, in jeopardy (details here)

In the first few weeks after Russia’s invasion, Russian President Vladimir Putin and his people attempted to win the support of Crimean Tatar leaders Mustafa Dzhemilev and Refat Chubarov, and of the Mejlis.  When this failed, the Kremlin turned swiftly to repression.  Both Dzhemilev and Chubarov were soon banned from their homeland, then repressive measures began against the Mejlis, resulting in its ban and the arrest and long imprisonment of Deputy Mejlis leader Akhtem Chiygoz.

The prosecution of Chiygoz and five other Crimean Tatars was both overtly racist and astoundingly lawless.  All trumped-up charges related to the demonstration on 26 February 2014, although this had quite unequivocally taken place on Ukrainian territory, under Ukrainian law.

Russia has systematically persecuted those Ukrainians whom it cannot drive out of their native Crimea, with the first political prisoners – Mykola Shyptur; Oleg Sentsov; Oleksandr Kolchenko and two other opponents of annexation – appearing in the first months after its invasion.

By now, there are close to 90 known political prisoners held in occupied Crimea, or Russia, with a majority of these Crimean Tatars.  An ever-increasing number of Crimean Tatar civic activists and journalists are imprisoned for their involvement in the civic initiative Crimean Solidarity, which helps political prisoners and their families, and provides vital information about human rights violations in Crimea where Russia has crushed any independent media.

There was wide publicity on 7 September 2019 when Russia handed over, as part of an exchange of prisoners, some of the most prominent Ukrainian political prisoners, including Sentsov, Volodymyr Balukh and journalist Roman Sushchenko.  Among the men released, there was only one Crimean Tatar hostage - Edem Bekirov, whose life was in danger and who lives in mainland Ukraine (he was seized by the FSB while visiting his elderly mother in Crimea).  This is despite the fact that over 60 of the political prisoners are Crimean Tatars.  Even if, as Ukraine’s leaders have promised, the next release is of at least some of these political prisoners, Russia has just arrested Nariman Nezhmudinov on fabricated charges, and he is just one of five hostages, including a woman in her sixties, since September 2019.

If Crimean Tatar and other Ukrainian political prisoners are to be released, Ukrainians in mainland Ukraine and people in other countries need to become their voice.  We all know it’s possible, since that is precisely what so many people all around the world did for Oleg Sentsov.  This can be through letter-writing campaigns; flash mobs; lobbying government representatives; contacting national and international rights NGOs, asking them to issue statements or urgent actions in a political prisoner’s defence.

It is very easy to be overwhelmed by the sheer scale of the repression, but try ‘adopting’ one or two of the prisoners, or, perhaps, focusing on a particular case.

Writing letters is always important – both in telling the prisoners that they are not forgotten, and in showing Moscow that their behaviour (and their treatment of the political prisoner) is under scrutiny.

Russia’s use of conveyor belt repression, especially against Crimean Tatar activists, makes the task easier than one might think.  65 men, at least half of them civic activists / journalists are facing the same ‘terrorism’ charges, based solely on totally unproven claims that they are involved in the peaceful Hizb ut-Tahrir party which is legal in Ukraine and has never committed acts of terrorism or violence.  Russia is the only country in the world to have declared Hizb ut-Tahrir ‘terrorist’ and it is using the arrests to crush Crimean Tatar civic activists and to instil hatred against Crimean Tatars and all Ukrainians in occupied Crimea.

Of the most immediate concern is Dzhemil Gafarov, whose life is in danger.

The first overt persecution of Crimean Solidarity activists

Rustem Vaitov  (released in January 2020, after serving his sentence in full)

Nuri Primov  (released in January 2020, after serving his sentence in full)

Oleksiy Stohniy  (released in February 2020, after serving his sentence in full)