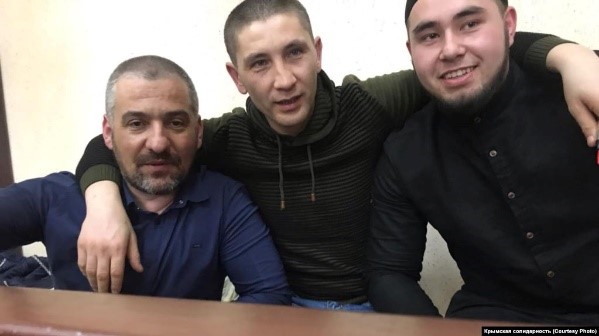 The questioning on 26 February of a ‘secret prosecution witness’ in the trial of three  Crimean Tatar political prisoners was the stuff that comedies are made of.  Or would have been, except that all three men are facing sentences of up to 20 years for no recognizable crime and the court was clearly unconcerned that a key ‘witness’ did not appear to know which defendant was which.

Russia standardly uses ‘secret witnesses’ in its trials of Ukrainian political prisoners, charged with ‘involvement’ in Hizb ut-Tahrir, a peaceful Muslim party which is legal in Ukraine, but which Russia has decided to call ‘terrorist’ without providing any adequate reason.  The identify of such ‘witnesses’ is concealed from the defence, and there is effectively no way of checking their testimony. There may be occasions where a witness’s anonymity needs to be protected, however, in none of the cases involving Crimean Tatar and other Ukrainian political prisoners has the prosecution ever provided evidence of threats or pressure to warrant such secrecy.

Defence lawyers representing civic activist Rustem Emiruseinov; Arsen Abkhairov and Eskender Abdulganiev applied to the court on 26 February to reveal the identity of the secret witness referred to as Tatarov.

The court refused to do so and did not change its position even after the witness could not answer whether he had ever received threats and made the most incriminating of mistakes.

The point about all of these ‘Hizb ut-Tahrir’ trials is that the men are not actually accused of a crime or even a plan to commit a crime, only of involvement in an organization that Russia’s Supreme Court during a secret court session in 2003 declared ‘terrorist’.  The FSB need only produce ‘evidence’ that a person read a book which Russia (rightly or wrongly) links with Hizb ut-Tahrir, or discussed certain aspects of Islam.  And this they can do with the help of secret witnesses’.

The man referred to as Tatarov was not physically present in the courtroom and even his voice was altered, although there is nothing in the criminal procedure code to allow for this.  It was likely, from his silence after certain questions, that he needed to find the answer from a written text or from somebody in the room prompting him.  The man could reel off certain details that fitted the prosecution’s charges, while being quite unable to remember when or where meetings had taken place, as well as other bizarre lapses of memory.

He was asked by defence lawyer, Emir Kurbedinov, if he had received any threats from Emiruseinov.

“What does hard to answer mean? Why?”

“Did you write complaints about threats from Emiruseinov?”

The list of things he claimed not to remember was formidably long and included things it would seem hard to forget,  such as which city or cities he had earlier been questioned in.

When asked by the prosecutor, he claimed to have met many times with the three defendants: Emiruseinov; Abkhairov and Abdulganiev “and other people unknown to him”.  His ability to name only those three people is all the more strange since, when asked by the prosecutor if he had been given ‘tasks’, he claimed that he was supposed to recruit new people – to allegedly conspiratorial meetings where he himself only knew three of the men.

Or said he knew them.  During the hearing, Emiruseinov began questioning the ‘witness’.

“When did we first meet?

There was laughter from the courtroom, and the judge informed this key prosecution witness who claimed to have been at many meetings with the three men that it was Emiruseinov who was asking him questions.

All three of the men asked about the kind of things that a person who knew them would be able to answer, with the ‘witness’ claiming that he didn’t remember.  It is not clear whether he is, as Abkhairov suspected, an FSB officer, or somebody put under pressure to give testimony, but he had evidently been given certain accusations to make and any request for further details left him unable to do more than to bleat that it was hard to answer or that he didn’t remember.

The falsification in this case is not only in the priming of suspect secret witnesses.  Emiruseinov is adamant that two disks and a book entitled ‘The concept of Hizb ut-Tahrir’ were planted on him.

It should be stressed that the armed searches of the men’s homes found nothing that could possibly warrant the charges against the men, and even if the reading material had not been brought with them by the FSB, it also contains nothing even remotely resembling terrorism.

These trials are exceptionally cynical, especially in the case of Crimean Tatars, and not only because Russia is in breach of international law in its application of Russian legislation on occupied territory. Russia’s propaganda media report these cases as though the men are ‘terrorists’, without letting on that men who have never committed any offence are accused only of unproven involvement in an organization which is not known to have committed acts of terrorism anywhere in the world.

You only need to hear the nonsense written in the indictment read out during the first hearing by prosecutor Igor Nadolinsky to know that the investigators, the prosecutor and, unfortunately, the judges know how lacking in any substance the charges are.  Yet Emiruseinov could face a 20-year sentence, for supposedly ‘organizing a Hizb ut-Tahrir group’ (under Article 205.5 § 1 of Russia’s criminal code), while Abkhairov and Abdulganiev could get from 10 to 20 years for supposed ‘involvement’ in this group  (Article 205.5 § 2).

The next hearing is scheduled for 4 March.