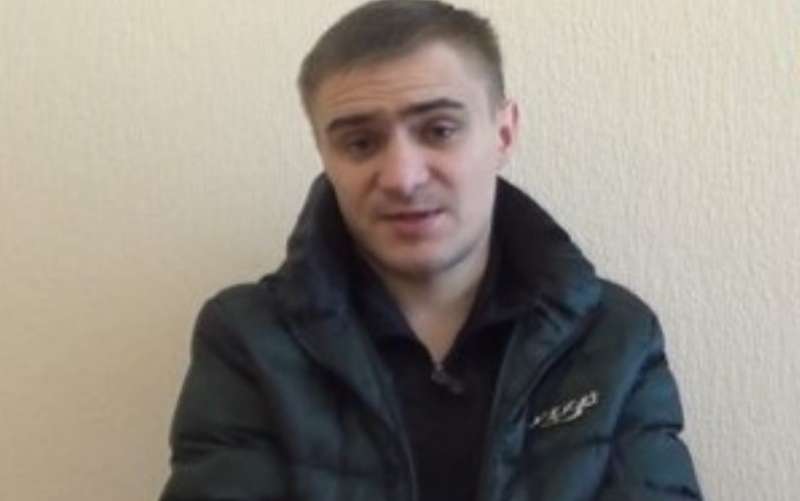 The self-proclaimed ‘Luhansk people’s republic’ has sentenced Anton Hryhorov, an employee of the Luhansk University, to 12 years for what they call ‘state treason’. The so-called ‘LPR ministry of state security’ claims that Hryhorov passed on ‘state secrets’ to the Ukrainian SBU [Security Service].  As is most often the case, the main source of information is Hryhorov’s taped ‘confession’.  Other hostages, since released in prisoner exchanges, have given graphic accounts of the torture methods which can force people to admit to anything.

According to the version which Hryhorov repeats on video, he was recruited by the SBU while crossing the checkpoint at Stanytsa Luhanska, with the officer, referred to as ‘Vladimir’ having supposedly threatened reprisals against Hryhorov’s family.

The SBU allegedly instructed him to gather “information constituting a state secret”. This was supposed to include information about LPR fighters (whom they call “military servicemen”), “as well as other information of a political and socio-economic nature”.  The ‘state secret’ regarding the fighters appears to have a list of fighters enrolled at the university. Hryhorov says that the last of three tasks he was given was to recruit employees of “state departments”, but that he had not carried this out as he does not have such contacts.

All of the above are supposed to warrant  charges of both ‘state treason’ and ‘spying’ according to the ‘criminal code’ of an unrecognized and Russian-controlled ‘republic’. It is likely that the main point of the report was, in fact, terror, in the form of a warning to report any activities by the Ukrainian SBU, volunteers or Armed Forces.

We can be virtually certain that Hryhorov did not have anything remotely resembling a proper trial, and it is not even known when he was ‘arrested’.

Despite the apparently absurdity of the charges, it is quite possible that Hryhorov was seized because of pro-Ukrainian views, or even activities, which no democratic country would consider ‘state treason’.  That, however, will only become clear when the young man is finally freed.

Olena Sorokina, for example, was seized by the ‘LPR’ militants at the end of October 2018, and was only released in the exchange of 29 December 2019.  She had been ‘sentenced’ to 13 years on charges of spying, state treason, incitement to enmity and posting leaflets on walls.  She admitted only to the last charge.  She could hardly admit to ‘treason’, she said, when she was defending her country, Ukraine.  The same is true of many other hostages, including Luhansk partisans  Volodymyr Zhemchugov and Oleksiy Sizonovych.

Vladislav Ovcharenko was just 19 when he and his slightly younger friend, Artem Akhmerov were seized by the ‘LPR’ militants in October 2016.  He was later ‘sentenced’ to 17 years, Akhmerov to 13.  It was known only that they had held a protest action in which they burned the ‘LPR flag’ after a remembrance event for a friend who had died defending Ukraine at Ilovaisk.  Ovcharenko had also openly criticized ‘LPR’ to a German journalist.  Ovcharenko has since said that he had provided information to the Ukrainian Armed Forces. Both young men were finally released on 27 December 2017.  Ovcharenko has since described the torture they were subjected to by the ‘LPR’ militants.  During the first month held in an ‘LPR’ basement, there were daily interrogations, beatings and torture (for example, having his fingernails pulled out).  They threatened him, and said that they would seize his parents as well, and kill them all.

They did not use electric shocks against him, but he says it was used.  He recalls that a young man was thrown into his cell, who smelled of burned flesh.

In Ovcharenko’s case, the beatings, etc. were not even because he was refusing to answer.  He explains that they often asked questions that you couldn’t answer.  He was asked, for example, to tell them where the “NATO manuals” were, as somebody had told them that he had such ‘manuals’ in his home.  In fact he only heard the word (‘manual’) for the first time during the interrogation.

He signed a document they demanded of him, saying that he had handed information to the Ukrainian Armed Forces and had planned various acts of sabotage, but notes that this did not stop the beatings.  Typically, they only stopped the physical torture when a Russian propaganda channel, NTV, turned up and produced a video, claiming that Ovcharenko and Akhmerov were members of a ‘neo-Nazi group helping the Azov Regiment’.

Ovcharenko explains that the sentence was divided into 16 years for “state treason” and a year for the burned flag. Asked by a BBC Ukrainian Service journalist about his attitude to the sentence, he answered: “We’re not citizens of ‘LPR’, we’re Ukrainians. How can I, a citizen of Ukraine, betray an invented republic?  That’s insane!”