Zelensky urged to stop the sabotage of judicial reform in Ukraine 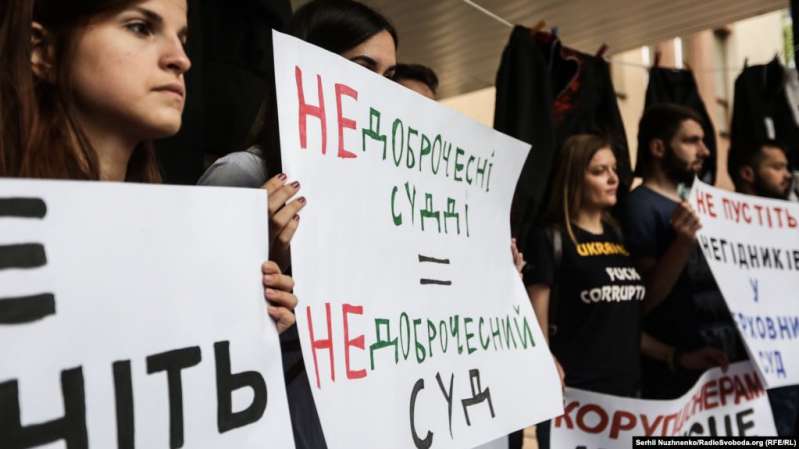 Prominent Ukrainian NGOs have called on President Volodymyr Zelensky to remove grave flaws in recent legislation that are paralyzing vitally needed judicial reform.  At a press conference on 28 February, they explained the current stalemate caused by one unreformed judicial body and stressed that it is Zelensky who has the power to rectify the situation.  One of the speakers also pointed out that the failure to achieve proper judicial reform had had a fatal impact on former President Petro Poroshenko’s popularity, and warned that Zelensky could face the same fate.

A draft law on the activities of bodies of judicial governance was tabled by the President in late August 2019.  Critical assessments from, among others, the Venice Commission of the Council of Europe and the President of the Supreme Council, were ignored, and the bill was adopted and signed into law on 4 November 2019.

The law did have a positive aim, namely to rectify problems linked with the power of members of the High Qualification Commission of Judges and the fact that this remained unreformed.  It envisaged the formation of a new High Qualifications Commission of Judges (HQCJ) selected in accordance with new rules;  HQCJ was to be selected by a special commission made up of three members of the Council of Judges and three international experts, chosen from a special list.  The final decision on appointments was to be taken by the High Council of Justice, although from a list of candidates equalling the number of vacancies.

The role of HCJ in the makeup of the ethics commission was one of the points that was criticized by Ukrainian experts and the EU .  How could there be a proper reform if the High Council of Justice itself remained unreformed, they asked, and have been proven right.  It is HCJ which is seriously blocking the reforms.

The same kind of sabotage is seen in the formation of the ethics commission with HCJ simply not delegating its members to the new body, claiming that none of its highly-paid members has expressed willingness to take part.  The reason is pretty clear. According to Halyna Chyzhek, from the Anti-Corruption Action Centre, they assess that once the ethics commission begins its work, at least a third of the members of HCJ should be dismissed.

HCJ is also effectively blocking selection of new judges, although there is a shortfall in Ukraine of almost two thousand judges.

The risk to judicial reform is great, and the DEJURE Foundation; the Anti-Corruption Action Centre; the Centre for Political and Legal Reform; Transparency International Ukraine and Automaidan have issued a public appeal to President Zelensky.  They ask him to submit a new bill ensuring a transparent competition for members of the High Qualification Commission of Judges according to rules established by a selection commission in which international experts take part.  They urge him to also unblock the creation of an ethics commission so that the latter can rid the High Council of Justice of members who should not be there.  In general, they stress, judicial reform cannot be unblocked unless the powers of the High Council of Justice are reduced.

The appeal also mention another major area of concern, both within Ukraine and abroad, about last year’s laws, namely the huge reduction in the number of judges of the Supreme Court. This was criticized in the Venice Commission’s assessment and the authors of the appeal call on Zelensky to heed the view of that renowned expert body.