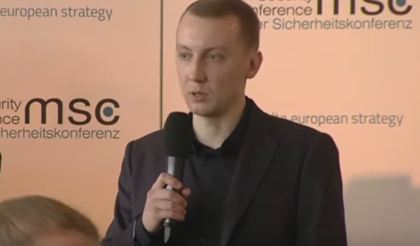 There has been strong reaction from many distinguished public figures to the outrageous “’12-step plan’ on Ukraine” published on the eve of the 2020 Munich Security Conference.  Perhaps the most compelling and poignant, however, was given by Stanislav Aseyev, a Donetsk writer and journalist freed in the last exchange of prisoners after 31 months held prisoner in the self-proclaimed ‘Donetsk people’s republic’.  Almost all of that time, he was held in Izolyatsia, the former art centre turned into a secret prison where Russian and Russian-controlled militants torture with impunity.

“In 2012 my native city Donetsk greeted the European Football Championship with a new airport, a new railway station and stadium.  Now, in 2020, there is none of that in Donetsk.

There is, however, something else. Right in the centre of the city there is a special ‘ministry of state security’ prison called Izolyatsia.  It was there that I spent 28 months of my captivity, and it is specifically that place which gives a very clear understanding of what we are dealing with when we speak of our war today. This is not just about Russian aggression when the Russian Federation looks at his country like a desirable country residence.  It’s now about whether you are a human at all.”  He cites two examples.  One an elderly woman hostage, who was forced to crawl under the bunk because she had dared go up to a window that was ever so slightly openly.  The other – a grown man forced to bark like a dog just because one of the militants felt like demanding that.

“I am not saying this to get sympathy.  I don’t need sympathy.  It’s those who are still in Izolyatsia that need sympathy.  I’m telling you this so that when we engage in negotiations with the Russian Federation about this territory, we clearly understand that we are not just talking about the border or economics, although that is also very important.

We are talking about freedom in the highest sense of the word, which cannot be up for bargaining.  And when some of our western colleagues do not understand this because they feel safe thanks to the thousands of graves of my compatriots, we Ukrainians do not have the right to forget.  After all, every minute, right now, while I’m speaking in this room in such amazing company, right now in the centre of my Donetsk somebody is being savagely and inhumanly tortured.”

There are no grounds for seeing anything figurative in Aseyev’s words about Izolyatsia.  Although the ‘DPR’ militants have never admitted to having this prison, and prevent international observers from seeing any hostages believed to be held there, Aseyev is not the only person to have testified to the horrific, and sometimes fatal, methods of torture used there. As reported, one of the militants, Roman Lyahin, is currently on trial in Ukraine for his key role in the seizure of Izolyatsia.  There is little sign of progress in the trial, and former hostages have from the outset expressed concern that Lyahin could reach a deal with the prosecutor and / or be released as part of a prisoner exchange.

Until Russian and Russian-armed militants seized control of Izolyatsia in June 2014, it was a former factory complex that was used as a vibrant art and cultural centre. The militants are reported to have immediately put a sniper in place and turned it into a secret prison of the so-called ‘DPR ministry of state security’. The Media Initiative for Human Rights quotes a Donetsk woman as saying that everybody knows there is such a secret prison, however nobody dares say it aloud.  Even if a person’s relative has ended up there, they refer to Izolyatsia as “the place where people disappear”.

The reasons are clear since this is a prison which those who were held there have called a real concentration camp, where the militants use beatings, electric shocks, as well as all types of psychological torture.  Over the last five years, several hundred people may have been imprisoned in Izolyatsia, with this figure including both militants and civilian hostages suspected of ‘spying’. Aseyev has pointed out that the militants do not separate the prisoners – according to whether they are ‘their own people’ or outsiders, “and in that sense, it’s like 1937 there”, Aseyev adds.  From his account, it is clear that, like in the worst year of the Soviet Terror, you can be a so-called ‘DPR minister’ one day, and a prisoner in Izolyatsia the next.

It must be said that the forms of torture which former hostages mention are those which the Russian FSB are known to have used against many Ukrainian political prisoners, and to which hostages held in the so-called ‘Luhansk people’s republic’ have also been subjected.  The level of sadism, as well as the horrific conditions and forced labour are presumably worse since the militants are clearly eager to conceal all information about this prison in the centre of Donetsk.

The publicity and campaign for Aseyev’s release meant that the militants needed to at least ensure his physical survival.  Judging by the account of another former hostage, this was not always the case.

Stanislav Pechonkin was seized in January 2017, and ‘sentenced’ to 10 years’ imprisonment at the beginning of 2019 for ‘spying’.  He was released as part of the 29 December 2019 prisoner exchange.

The beatings and other forms of torture began before Pechonkin was taken to Izolyatsia.  He recounts, for example, how he was beaten and interrogated for 10 days in the ‘police station’.  On one occasion, this was by so-called ‘DPR anti-terrorist officers’, including a former Ukrainian police detective Vitaly Kolesnikov.  He was interrogated and beaten, and then heard the words: “Put the kettle on”.  They poured boiling water onto his head which, he believes, caused 2nd degree burns, and then threw him into a cell without any medical help. Instead he was told “to think”.

It was after this that he was taken, with a bag over his head, to Izolyatsia and placed in a tiny cell for two days.  Although he had admitted to providing information for Ukraine’s SBU [Security Service], the militants’ lie detector said he was not telling the truth, and they began “working on him”, with this including beatings while he was held against the wall, with his arms and legs stretched out, and electric shocks.  In his case, the militants only attached the electrodes to his fingers, but he knows of electrodes having been attached to prisoners’ toes, to their earlobes (Pechonkin notes that they did this to Aseyev), and to a person’s genitals.  Virtually nobody can endure this, he says, and people sign what is demanded of them.  In his case, he had already admitted the real extent to which he provided information to the SBU, but under such torture, he invented new details and ‘admitted’ anything they wanted..

The account both Aseyev and Pechonkin give is horrific also because of the evident sadism of many of their torturers. One of Aseyev’s interrogators, a man who was present but did not take part in the torture, admitted to Aseyev that “of course you can’t call a person normal if during the day he attaches a wire to a person’s genitals and sends an electric current through it, then in the evening goes home to his wife, has dinner and sleeps with her.  Sure, for such work we choose a particular psychological type of person. So that they themselves don’t go crazy, and so that they do what we need”.

Pechonkin describes what was evidently ‘entertainment’ for some of these individuals.  They would force prisoners to beat one another.  According to Pechonkin, the prisoners learned to simulate pain.  They were permanently under total observation, he adds, with videos in each cell, so that if you wanted to say anything important to another prisoner, it had to be in a whisper. Sometimes, when drunk, the torturers went too far, and killed prisoners.

Throughout all of this, they would constantly repeat that everybody had forgotten the hostages, that nobody needed them.  It’s hard to describe all of this, Pechonkin adds, you have to experience it.

The above are only two of many Ukrainians tortured at Izolyatsia, including many women, about whom we will write separately.