Dictatorship law that could force Poland out of the EU brings thousands out in protestPoland’s Government uses ‘Public TV’ as a propaganda tool to win the elections. Will the EU react?Ukrainian Open Dialogue activist deported from Poland after criticizing right-wing governmentPoland’s Government deals death blow to independent judiciary. Free elections the next target if EU doesn’t act nowPoland’s right-wing government poised to seize more control of the judiciary than Yanukovych achieved in UkraineMenacing attack on Independent Polish TV channel as ruling party set to gain control over judiciaryPoland’s PiS government pushes through illegal elections by post to retain power amid Covid-19 pandemicUkrainians block "deliveries of death" from Poland to Belarus and Russia, demanding the EU stops trading with killersA great age approaches (statement of the First of December Initiative Group) Russia calls Soviet invasion of Poland in 1939 a ‘march of liberation’ Comparing Stalin to Hitler could soon get you prosecuted in Russia, saying they both invaded Poland already hasOpinion on the political motives of criminal persecution and violation of human rights in the case of Sergiy PashinskyPoliticized Polish judicial body illegally rubberstamps unfair presidential electionsSombre Anniversary with hopes of justice for Maidan victims waningChildren in occupied Crimea and Russia fed lies about the war in Donbas and anti-Ukrainian propagandaThe Facts about Anti-Semitism in Ukraine that Russia doesn’t want knownA brief description of KHPG strategic litigations in July – December 2018Poland charges three with terrorism & sees Russian link in arson attack on Hungarian Centre in UkraineA brief description of KHPG strategic litigations in January–June 2018Russian prosecuted for posting that USSR invaded Poland in 1939 denied asylum in Czech Republic
• Topics / The right to a fair trial 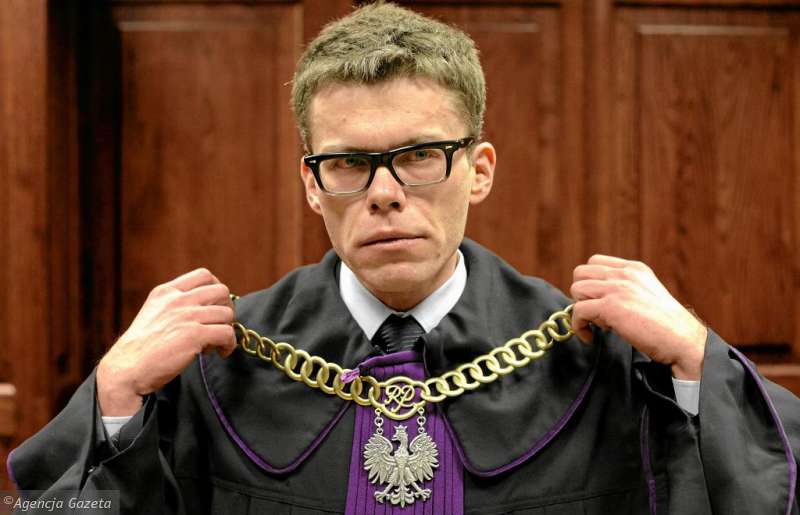 One of the most courageous judges speaking out against the current Polish government’s attack on the judiciary is threatened with criminal charges that could carry a three-year prison sentence.  If Igor Tuleya does end up convicted, he hopes that “maybe this will be the cry of despair that Europe will hear.  At present the reaction of the European Union to the violation of rule of law in Poland is indecisive”.

The relative silence over the weeks since President Andrzej Duda signed into force the gravely repressive ‘Muffle law’ has been deeply disturbing.  Duda signed the bill within hours of French President Emanuel Macron’s departure from Poland, and the suspicion unfortunately arises that the message Macron gave was that Europe would express a lot of deep concern, but little more.  This has so far been the case, although the law in question is overtly repressive and aimed at crushing judicial independence in an EU member-state.

The news on 27 February that the prosecutor wants to bring criminal charges against Tuleya came two days before Tuleya and other judges from the Justitia Association of Judges published a devastating report in both Polish and English entitled ‘Justice under Pressure’.  This outlines the repressive measures taken against judges since the right-wing PIS [Prawo I Sprawiedliwość, or ‘Law and Justice’] party came to power in 2015.  The report provides not only a list of the judges who have faced disciplinary measures and why, but also looks at those judges who have proven willing to ignore the Polish Constitution and their oath, and take part in the politicization of the justice system.

PiS effectively took control of the Constitutional Tribunal late in 2015 and, under Zbigniew Ziobro as both Justice Minister and Prosecutor General, secured a dangerous level of control over prosecutors.  Its efforts to take control of the Supreme Court have so far failed, however the First President of the Court, Professor Małgorzata Gersdorf’s term ends in April 2020, and the new law just passed makes it easier to control the choice of her successor.

In 2018, PiS did succeed in politicizing KRS [the National Council of the Judiciary] which appoints judges, and in creating a ‘Disciplinary Chamber’ within the Supreme Court, made up largely of ex-prosecutors close to Ziobro chosen by the new KRS.. The government had long flouted two binding court rulings, ordering it to make public the mandatory list of 25 judges supporting any candidate for KRS,  When finally forced to in early February, it became clear that virtually all of the new members of this body had been endorsed by judges who owed recent success in their career to Ziobro and his justice ministry, and that at least one judge, Maciej Nawacki had endorsed himself and got his wife to endorse him, yet still did not have sufficient endorsements.  Although this alone places the legality of KRS in question, there is total silence from those in power.  The latter have openly showed contempt also for the ruling by the Supreme Court, based on instructions from the EU Court of Justice, finding that the Supreme Court’s ‘Disciplinary Chamber’ is not a court and that the members of KRS had not been chosen in the correct manner, meaning that any future rulings by judges whom it had appointed could be challenged.

PiS then got the Constitutional Tribunal, which it controls, to ‘suspend’ the Supreme Court’s ruling, claiming that this was because of a dispute over competence.  The reason has been totally dismissed by all legal experts, and the Supreme Court, however for the moment the Disciplinary Chamber is continuing its increasing repressive measures against independent judges.

The measures announced by the public prosecutor against Judge Tuleya are, however, on a new level.  If on 20 March, the Disciplinary Chamber does agree to revoke Tuleya’s immunity, he could face criminal prosecution for totally legal actions as a judge.  This is undoubtedly political persecution aimed at terrorising other judges into subservience.

“Europe’s silence will be even more frightening than what we have seen so far”, Tuleya says.  “Poland is a large country. All can fit in it, those of us who will be imprisoned and those who will imprison us”.

In fact, the stakes are immeasurably higher, and not only because of the number of detainees whom EU courts will be unable to send back to Poland, given the ever-mounting grounds for doubting that a fair trial can be expected. The EU did not particularly react to Hungary’s move away from democracy.  If it allows Poland to fully descend into authoritarianism and a justice system controlled by the ruling party, where will it put an end to the rot?  The suspension of  Olsztyn Judge Paweł Juszczyszyn, essentially for complying with a decision from the EU Court of Justice, should have already been a red line that the EU could not see crossed.  Now Judge Tuleya could end up imprisoned for acting in accordance with his powers as a judge and his conscience.

The charges that the prosecutor is proposing to lay are evidently absurd.  If a judge were suspected of committing a serious crime, there would be grounds for seeking the removal of his or her immunity.  Here the charges pertain to Tuleya’s decision to allow the media to take part in a hearing pertaining to a highly ireegular session of the Sejm and the refusal by the public prosecutor to properly investigate the objection by opposition MPs.

Two Polish lawyers, Jacek Dubois and Michał Zacharski have given a devastating assessment of these ‘charges’.

They begin by pointing out that the ‘Disciplinary Chamber’ is not a court, as confirmed on 23 January 2020 by a huge number of judges from all three chambers of the Supreme Court.  This body created by the politicized KRS [National Council of the Judiciary] does not, therefore, have the right to issue any ruling, waiving immunity.

There are also, however, no grounds for doing this. The prosecutor is claiming that on 18 December 2017, in his capacity as judge of the District Court in Warsaw, Tuleya did not carry out his official duties and overstepped his authority by allowing the media to video the court hearing and thus allowed unauthorized persons to receive information about preliminary proceedings by the district prosecutor, with this purportedly harming the public interest.

In fact, they point out,  the prosecutor did not ask for the hearing to be closed to the public and it is ultimately for the judge to decide whether any specific hearing should be open or not.  There is nothing in any regulations forcing a judge to hold hearings behind closed doors, and there can be no grounds for claiming that Tuleya did not carry out his ”duties”.

While the prosecutor’s charges are difficult to fathom, it is certainly easy to understand why Tuleya’s ruling annoyed the ruling party and the prosecutor.  Tuleya revoked the decision by the latter to terminate the investigation, and noted that the prosecutor had not explained in his justification who had taken the decision to move the parliamentary session, when and why.  All of this was seen and heard by viewers of at least TVN24 (essentially the only nationwide broadcaster that remains fully independent).

In January and February 2014, Ukrainian human rights and civic NGOs pleaded with the EU to impose sanctions against the regime of President Viktor Yanukovych.  The sanctions were finally announced late in the afternoon of 20 February 2014, after peaceful protesters had been gunned down in the centre of Kyiv.  Later that year, it was only after the downing of Malaysian airliner MH17, that the EU and western countries imposed serious sanctions against Russia over its aggression against Ukraine.

Many of us assumed then that the slowness to react was because Ukraine was not ‘part of the club, and was all too close to Russia whom the West did not want to annoy too much.  Such excuses cannot apply to Poland, and it is to be hoped that his persecution and his ‘cry of despair’ will finally be heeded.

At the end of his interview to Gazeta Wyborcza, Tuleya was asked what 30 words he would use if he got a magic megaphone to get through to other Europeans about the report on repression against the judiciary.  He answered:  “We are still today all Europeans, However you see what is happening in our country. If you don’t react, don’t help us, something similar could happen in your country. Helping us, you help yourselves. If you allow the destruction of rule of law in one corner of Europe, tomorrow that rule of law can be destroyed in your country.  We created Europe together and together we should defend it”/