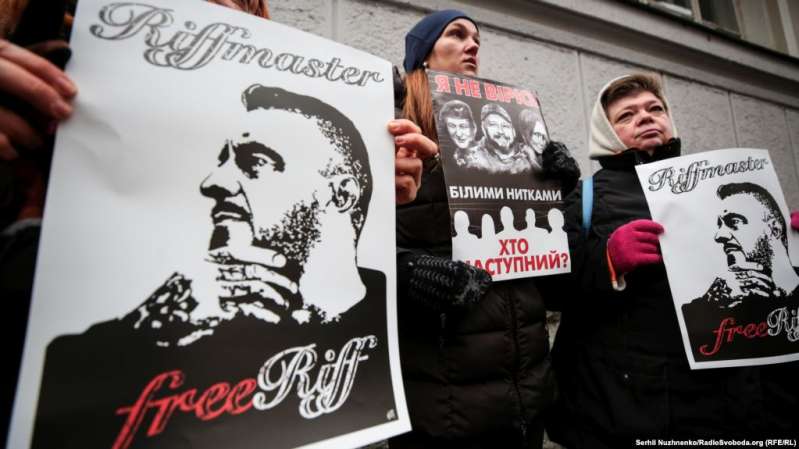 Police have searched the home of Leonid Maslov, a Kharkiv lawyer and war veteran, who has been strongly critical of the investigation into the murder of Pavel Sheremet in July 2016.  Maslov is not officially one of the three well-known suspects’ lawyers, however he is providing legal assistance to the defence team, and is open in asserting that the police have arrested the wrong people.

The police produced a search warrant from the Pechersky District Court in Kyiv.  This asserts that Maslov went on to a VKontakte social media page belonging to Andriy Antonenko, musician, veteran and key suspect, on 4 January 2020.  It is alleged that “he could have damaged or destroyed information which could be of interest in the criminal proceedings. Maslov posted information about this event on Facebook. Maslov can thus have access to Antonenko’s social media pages and to other material evidence and hide these from the investigators”.

Police spokesperson Artem Shevchenko has refused to provide any comments, except to assert that this is “a normal thing”.

Not everybody would agree, and not only, as fellow lawyer Masi Nayyem noted in reporting the search, that the investigators’ assertion was false and that this was easy to verify.  The investigators appear to be asserting that Maslov accessed one of the suspects’ social media pages and then reported this on Facebook.  It is certainly not clear why he would do this if he were trying to distort material evidence, but it is also hard to imagine that he could.  The arrests of Antonenko, paediatric surgeon and military volunteer Yulia Kuzmenko and military nurse, Yana Duhar, were made and very publicly announced at a press briefing on 12 December 2019, it seems inconceivable that any material evidence from social media had not been noticed and safely recorded before that.

Maslov has openly rejected the version presented by the prosecution and circulated information that he believes refutes the charges.  What could the investigators be hoping to find at his office, and on the telephones and computer disk that they removed, together with bullets from a firearm that he has a permit for?   Maslov’s lawyer Vitali Galenchenko believes that only grounds for the search was Maslov’s Facebook post about the defence having access to Antonenko’s account, and about how (in his view) the assertions on which the investigators base their charges are pulled out of context and twisted.

Maslov himself says that he was subjected to a search because he is has access to Antonenko’s phone and social media accounts (he has specialist for the defence status).  “All of this is held at the workplace of lawyers Dmytro Kruhovy and Vitali Galenchenko, but they can’t be searched, and I of course don’t have anything like that at home.”  He mentions the removal only of his telephone and the ammunition.

A recent survey by the authoritative Razumkov Centre found that only 16% of those asked considered the charges against Antonenko, Kuzmenko and Dugar to be reasonable (6.1% – justified, 9.9% - probably justified).  16.8% said that they aroused doubts, while 18.8% believed them to be unfounded.  The other 48.4% were either uninterested or said that they did not have sufficient information to know.  It is for the court, not public opinion polls, to decide, of course, however the results are indicative, especially given the very public press briefing about the arrests, in the presence of President Volodymyr Zelensky, Prosecutor General Ruslan Riaboshapka and Interior Minister Arsen Avakov.

There are certainly multiple concerns about this case, including the flagrant violation of the presumption of innocence in the above-mentioned press briefing on 12 December 2019  (details here  Presumed innocent until a police briefing in Ukraine. Doubts mount over Sheremet arrests ).

There had been a telling shift in Riaboshapka’s position from his upbeat congratulations on 12 December to an Interfax interview on 30 January 2020 when he acknowledged that more evidence needed to be gathered before the case was passed to the court.

There are concerns about the alleged motive; the fluid number of suspects;  certain evidence that appears to contradict the prosecution’s case and alleged alibis.

The investigators claim that Sheremet , a 44-year-old Belarusian journalist and former prisoner of conscience, was killed in a bomb blast, “in order to destabilize the situation in Ukraine”.

The investigators claim that Antonenko organized the crime, and sought out people to carry it out.  He is also supposed to have been the man, recorded by video footage, walking with the woman seen placing the explosive device under Sheremet’s car.  Kuzmenko is accused of having been this woman, while Duhar is supposed to have photographed the area in advance to inform on video cameras, etc.

It is alleged that Antonenko did this, “Seized by ultra-nationalist ideas, cultivating the supremacy of the Arian race, the division of society on the basis of ethnic identity, wanting to make his views the object of public attention and carrying out his actions in order to draw the public’s attention to certain political beliefs… he decided to create an organized group in order to carry out the murder of journalist and radio presenter Sheremet”.

Antonenko immediately expressed anger over these claims during the detention hearing on 14 December.  He said that he had grown up in a Jewish neighbourhood and is himself half-Jewish. The investigators had thus insulted both him and his family with their allegations.

The motive itself seems incomprehensible.  Sheremet’s murder did not attract public attention to such views and there is nothing to suggest that anybody tried to use it to draw public attention.

The ‘motive’, however, has one other drawback.  The above words, supposedly referring to Antonenko, appear to have been copy-pasted from an indictment against another person altogether, back in 2015 (before Sheremet’s murder).

There does not seem to have been any attempt to deny this, although it certainly makes the alleged motive seem even more dubious.

Oleksandr Zheleznyak, another person campaigning actively in defence of Antonenko and the others, has examined other ‘evidence’ based on social media posts, and found them equally lacking in substance.

There seems a dearth of hard evidence to back the claim that the three were part of a group espousing ultra-nationalist and racist views, and a serious problem with logic, given that Antonenko is half-Jewish and Duhar is married to an Iraqi.

The video footage from July 2016 was subjected to considerable expert assessment and an estimate given of the man’s height. The police then identified the male they were looking for as being 1.68-1.75 m. tall.  Antonenko at 1,8 m. is a considerable amount taller than the upper figure named.  This issue has yet to be addressed.  While the moustache and beard in both cases could be on the same face, the perpetrator had sideburns which, it can be proven, Antonenko did not at the time.

Only three people – Antonenko, Kuzmenko and Duhar - are actually facing charges over Sheremet’s murder, although five names, including Inna and Vladyslav Hryshchenko were mentioned during the press briefing.  This is, at very least, worrying since the police reported during the briefing that their DNA had been found on an explosive device.  It was not clear which device was referred to, nor how the couple were alleged to have been involved in the Sheremet case.  Almost two months later, there remains no clarity, and neither has been charged, with this surely raising the question of why they, and the supposed DNA ‘evidence’ that links him with a crime, were ever mentioned.

A great deal was made during the briefing about expert assessments, including one from Ivan Birch, a forensic gait expert from the UK.  The trouble here is that the assessments do not appear to be at all conclusive, and there really does not appear to be much else.