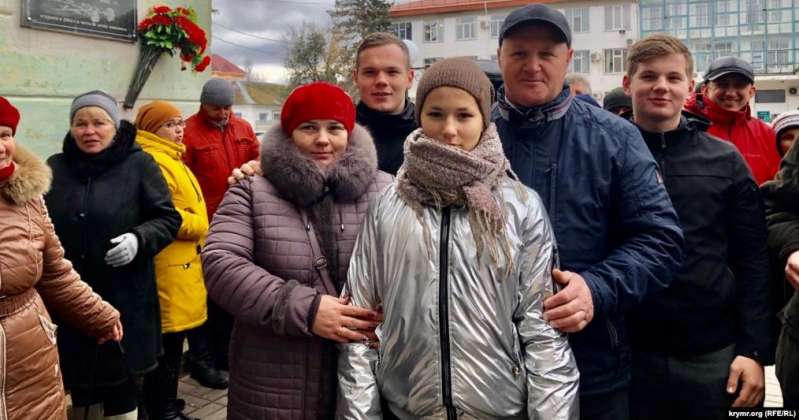 Serhiy Filatov has become the first Ukrainian Jehovah’s Witness to be imprisoned for practising his faith in Russian-occupied Crimea.  He was found to have prayed, together with others, in his own home, which the Russian-controlled prosecutor and court chose to view as “undermining constitutional order and state security”.

On 5 March, ‘judge’ Maria Yermakova, from the Russian-controlled Dzhankoy District Court, sentenced the 47-year-old father of four to 6 years in a medium security prison.  She additionally prohibited him from engaging in educational work involving public addresses or publications in the media or posting information in the media or Internet for five years, and a further one-year term of restricted liberty. Although less than the seven-year maximum security sentence demanded by ‘prosecutor’ S. Bulgakov, this is a horrifically long sentence which is, quite literally, for Filatov’s faith.  As well as being in flagrant violation of international law which prohibits Russia from applying its legislation on occupied territory, it also flouts Russia’s own constitution which guarantees religious freedom.

Russia returned to the repression of Soviet times on 20 April 2017 when it’s Supreme Court banned the Jehovah’s Witnesses, claiming them to be ‘extremist’.  There was international condemnation of the ruling, but this was ignored, and over the last two years there has been a sharp escalation in persecution of members of this world faith for practising their religion.  Filatov is the 30th believer in Russia or occupied Crimea to be ‘convicted’ for his faith, . He was charged under Article 282.2 § 1 of Russia’s criminal code which punishes for something termed ‘organization of the activities of an extremist organization.”   Russia treats the presumption of innocence with the same contempt it shows religious freedom, and Filatov was swiftly added to Russia’s notorious ‘list of extremists and terrorists’, with this bringing serious economic restrictions.  He was not, however, held in detention, and was taken into custody after the sentence was announced on Thursday.  He is likely to be held prisoner in the Simferopol SIZO [remand prison], where  an ever-increasing number of political prisoners and prisoners of conscience are held in conditions that are tantamount to torture.

Movingly, there were around 100 people who came to hear the sentence and show their support for Filatov.  Each of these people would understand that their presence will be noted by Russia’s FSB and could make them a target.   This was one of very few hearings to have been open, with most held behind closed doors.

On the eve of the sentence, Filatov told Krym.Realii that he did not have any illusions about the sentence.  “I think they will imprison me to scare all the others, including in Crimea.  That is, they don’t have a choice, the decision has been taken, it’s necessary to read it out”. Filatov’s lawyer, Oleh Zakharchuk has pointed out before that Russia is leaving believers with a stark choice: leave Crimea, abandon their faith or remain, but await likely arrest.  Filatov himself is, in fact, from mainland Ukraine.  He and his family moved to Crimea before annexation for the sake of one of his daughters who had health issues. He and his wife Natalya have four children: Anastasia (b. 1995); Oleksiy (1997); Ilya (2002) and Anna (2005).

Filatov was undoubtedly correct that the decision to imprison him had already been made, with Yermakova only needing to read it out.  When it comes to politically or religiously motivated ‘trials’, judges are there to pass the sentences demanded of them.

It was clearly decided that only one person in occupied Crimea would, for now, be imprisoned  and Artem Gerasimov, a Jehovah’s Witness from Yalta, received only a (huge) 400 thousand rouble fine.  As reported, another Russian-controlled prosecutor had demanded a similar sentence in Gerasimov’s case (6.5 years) and there is no obvious difference between the two cases, so Filatov was almost certainly right.  Russia wanted a first imprisonment in occupied Crimea to frighten others, with the choice of victim for the repressive occupation regime a technicality.