Moscow attempts to get trial of key Russian MH17 suspects moved to RussiaDutch Prosecutor accuses Russia of deliberately hiding important MH17 suspectIntercepted calls prove Russian government control of militants in Ukraine on eve of MH17Russia hides MH17 suspect, then uses him for lies about the disaster and about ‘civil war’ in UkraineHow can Russia deny responsibility for MH17 when it gave up Sentsov, others to get key witness out of Ukraine?MH17 suspect release incriminates Russia, but leaves Ukraine compromisedFamilies of MH17 victims call for honesty and justice from Russia as the lies continueThree out of four MH17 suspects are ‘former’ Russian FSB or military intelligence officersRussian Twitter ‘false flag’ operation to blame Ukraine for MH17 broke all recordsEuropean Court of Human Rights demands answers from Russia over downing of MH17 over UkraineNext step the Hague after Russian military source named for Buk missile that downed MH17Russian TV produces ‘witness’ of Ukraine downing MH17, then quickly removes reportRussian media twist Bellingcat study to find Ukrainian Buk in Donbas before MH17Incriminating Video, Endless Lies and Putin’s ‘Premature’ Tribunal on MH17Russian LifeNews inadvertently told the truth about downed Malaysian airlineMilitants accused of deliberately shooting at Severodonetsk residential areaSent to be shotThe EU’s Opaque Dealings with UkraineWhose anti-Semitic and Homophobic Choice?What should they talk about, Mr Putin?
• Topics / Terrorism 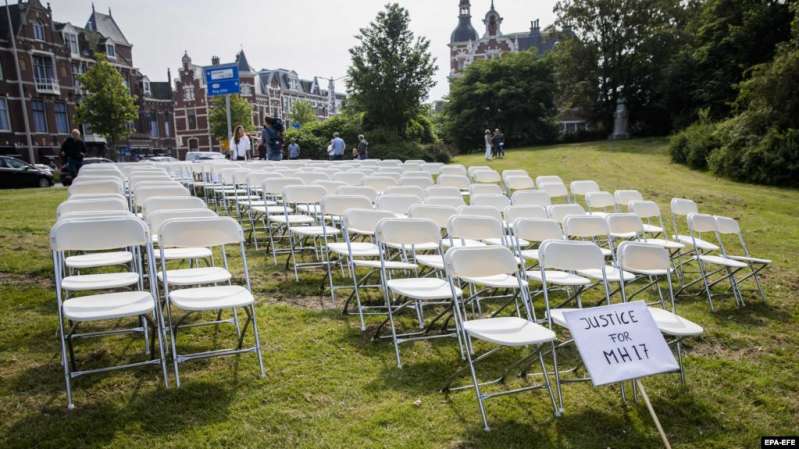 Relatives of MH17 victims placed 298 empty chairs outside the Russian Embassy in the Hague on 8 March, one for each of the passengers and crew killed by a Russian Buk missile on 17 July 2014.  Passers-by joined the relatives in a minute’s silence in remembrance.  The protest with placards demanding justice was timed to coincide with the beginning on 9 March of the trial of four on charges of murder over the downing of the Malaysian airliner over militant-held Ukraine.  Three of the four men are Russian former or current FSB or military intelligence officers, who, the Joint Investigative Team believe, “formed a chain linking the self-proclaimed Donetsk people’s republic with the Russian Federation”.

Unlike Iran, which swiftly acknowledged that it had downed a Ukrainian airliner in January this year, Russia has denied any responsibility for the downing of MH17 and has, instead, expended vast amounts of money and effort on propaganda pushing allegedly ‘alternative versions’, most of them blaming Ukraine.  Over the first two days after the disaster, Russian Internet trolls posted a record-breaking 65 thousand tweets trying to blame Ukraine for the disaster. If Moscow can pretend it does not control the activities of the so-called Internet Research Agency, otherwise known as the Russian troll factory in St. Petersburg, responsibility for other actions is much harder to deny.  There could be no good reason why Russia used its power of veto in the UN Security Council on 29 July 2014 to block an international tribunal into the downing of MH17.  In September 2019, the Kremlin made the release of 24 Ukrainian POWs and 11 political prisoners, including Ukrainian filmmaker Oleg Sentsov, contingent on Ukraine agreeing to release MH17 witness / suspect Volodymyr Tsemakh.  There is a video in which Tsemakh appears to be admitting to a role in the attempt to conceal the BUK missile launcher after it became clear that a passenger airliner had been downed.  It was presumably fear at what Tsemakh could reveal that made the Kremlin decide to incriminate itself by insisting on getting Tsemakh, a Ukrainian national, included in the exchange.  It then violated the European Convention on Extradition by swiftly getting Tsemakh out of Russia so as to not have to comply with an extradition request from the Dutch Public Prosecutor.

Despite Russian denials, it was clear immediately that MH17 had been downed by a missile.  One of the aims of the trial now beginning will probably be to determine how those using the sophisticate Buk missile launcher came to shoot a passenger liner, with some asserting that they must have known who the target was.  Within minutes of the plane being hit, Russian / pro-Russian militants had informed the Russian state media that they had downed a Ukrainian military plane, showing footage that was, instead, that of MH17.  During the evening, most Russian media quietly removed either the reports altogether, or at least the MH17 footage. No Ukrainian military plane was downed that day.

After Russia blocked a UN investigation, a Joint Investigative Team was formed by officials from the Dutch Public Prosecutor and police, as well as officials from Australia; Belgium; Malaysia and Ukraine. The greatest number of victims were from the Netherlands and one man whose brother and brother’s family were killed has described MH17 as Holland’s 11th of September.

In May 2018, JIT reported that “the Buk missile which downed Malaysian airliner MH17 on 17 July 2014 came from the 53rd Anti-Aircraft Missile brigade which is a unit of the Russian army from Kursk in the Russian Federation”.

Then on 19 June 2019, a press conference was held at which the first four suspects whom JIT wishes to put on trial were announced. While none is accused of having fired the missile, the chain of command to Russia provided by the four men is believed to have played a direct role in getting the Buk missile launcher to Ukraine and subsequent events.  The four men are: Igor Girkin, the ‘military commander’ of the self-proclaimed ‘Donetsk people’s republic’ who is described as a “former FSB colonel”; Sergey Dubinsky, either a current or former officer in Russia’s Military Intelligence Service [GRU]; Oleg Pulatov, a former soldier with the GRU’s special forces spetsnaz unit; and Leonid Kharchenko, a Ukrainian national, believed to be in militant-controlled Donbas.

Both Ukraine and Russia have clauses in their Constitution prohibiting extradition of their own citizens.  In Ukraine’s case, cooperation with the investigators would certainly be provided if Kharchenko were to be caught.  Russia’s behaviour thus far gives no grounds for expecting its cooperation.

The first hearings from 9 March are, in fact, likely to consider practical issues, since the trial will almost certainly be held in absentia, and so far only Pulatov has been reported to have organized a Dutch defence lawyer.

Since very many relatives of the victims will wish to attend and there is only room for twenty in the courtroom (chosen by ballot), a conference centre has been provided with video link to the proceedings.

In February this year, the Dutch Justice Minister Ferd Grapperhaus reported that Russia had proposed “prosecuting” the three Russian suspects in Russia, and that this had been rejected. It seems likely that the proposal was only ever made so that Moscow could, as it is now doing, claimed that it had tried to cooperate and been turned down.

While the trial is likely to take a long time, and any convictions would be hard, or impossible, to enforce without Russian cooperation, Russian President Vladimir Putin and the top management of the Russian Defence Ministry should be very worried about this trial and what it will demonstrate.

Even back in June 2019, the Dutch Chief Prosecutor Fred Westerbeke made it clear how clearly the trail led to Moscow. It was asserted, for example, that “being the highest in command, Girkin was in direct contact with the Russian Federation”, and that Dubinsky “was in regular contact with Russian officials as well”  Together the suspects “formed a chain linking the self-proclaimed Donetsk people’s republic with the Russian Federation”.  “It was through this chain that the suspects were able to get heavily military equipment from Russia to the battlefield in eastern Ukraine”.

Then in November 2019, JIT released an “MH17 Witness Appeal” which should really have given the Kremlin’s occupants sleepless nights.

As well as inviting other witnesses to come forward, JIT made it quite clear how many witnesses they already had, as well as revealing highly incriminating intercepted telephone calls.  These showed direct high-level Russian links with the militants controlling the territory. Girkin.  another Russian leader of the so-called ‘Donetsk people’s republic’ [DPR] Alexander Borodai, and other Russians have constantly parroted the Kremlin line that they were ‘volunteers’, however JIT points out that this is not borne out by witness testimony, nor by the intercepted calls. In one of these conversations, for example, on 3 July 2014, Borodai can be heard stating that he is “carrying out orders and protecting the interests of one and only state, the Russian Federation’.

In an intercepted call on 1 July 2014, between a DPR member and a fighter ‘Mongol’, the DPR member says:  “We’re moving towards unity of command. What happens next is a bunch of men with a mandate from Shoygu [the Russian Defence Minister] will arrive and kick the local warlords the fuck out of the units -  … and then people from Moscow will take charge.(…)

JIT has been told by several former DPR fighters that “the Russian security service FSB and the military intelligence service GRU were involved in the daily management of the DPR. One of the witnesses stated that DPR leaders regularly went to Moscow to consult with their contacts at the FSB and GRU.”  It notes that “intercepted phone calls also seem to show the involvement of Russian security services, working side by side in directing the DPR.” In a call from 18 July 2014 (the day after MH17 was downed), two DPR  say that they are getting calls from Moscow: one from the FSB, the other from GRU.

Girkin and Borodai both ‘left’ DPR’ in August 2014.  Girkin has never concealed that he was ordered to leave, and hand over ‘control’ to Alexander Zakharchenko.  The latter had the advantage to Moscow, especially in the period between the downing of MH17 and the first Minsk accords, of being a Ukrainian national.  In at least one interview, Girkin has made it clear that Zakharchenko was the choice of Putin aide Vladislav Surkov and JIT stated that they were eager to establish who had, in fact, given the orders to Girkin and Borodai to hand over control to Zakharchenko (more details here).