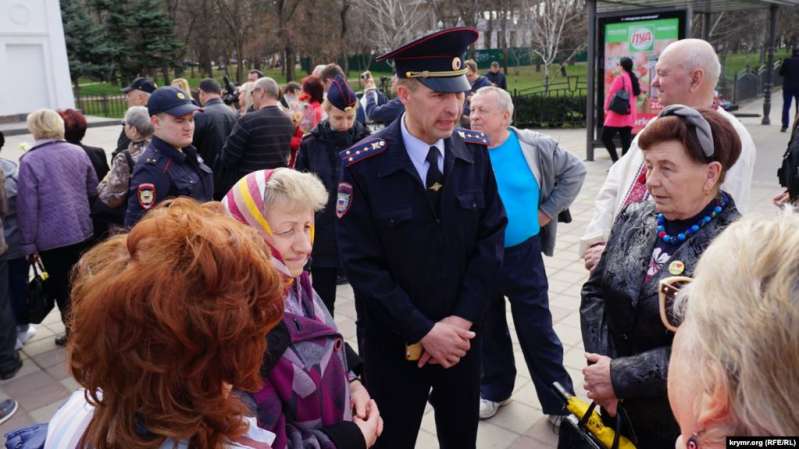 On 9 March, police in Russian-occupied Crimea prevented Ukrainians from singing Ukraine’s national anthem near the monument to the great Ukrainian poet Taras Shevchenko on the 206th anniversary of his birth. Nobody was detained this time, but that is probably because the terror methods used on earlier occasions have forced many Ukrainians to either leave Crimea or to avoid any remembrance activities that can be called ‘unauthorized demonstrations’.

Krym.Realii reports that people brought flowers bound in blue and yellow ribbons (marking the colours of the Ukrainian flag), and lit a candle at the bust of Shevchenko in the park bearing his name in Simferopol. Some of those who came were carrying small Ukrainian flags and people took photographs of themselves at the monument, although trying to do this before the official ceremony organized by the Russian-controlled authorities and attended by members of the so-called ‘Ukrainian society of Crimea’, an organization that has collaborated with the occupation regime.

It was during this official event that several women carrying Ukrainian symbols, but standing away from the officials, began quietly singing Ukraine’s national anthem Ще не вмерла Українa  Two officers immediately came up to them demanding to know if they had “official permission” and threatening them with prosecution for what they claimed was “provocation”.

In Soviet times, gatherings to lay flowers and read Shevchenko’s poems were an affirmation of national identity and independence and often resulted in arrests and persecution.  Those times returned with Russia’s invasion and annexation of Crimea.

Six years ago, annexation was ‘formally’ not complete, and Russia relied on the Russian-led and armed paramilitaries to attack and terrorize the considerable numbers who joined a pro-Ukrainian demonstration on 9 March 2014.  That day also resulted in Mykola Shyptur becoming Russia’s first Ukrainian political prisoner

After annexation, Russian-controlled ‘prosecutors’, FSB and police took over the persecution of any Crimeans who openly demonstrated Ukrainian and Crimean Tatar flags.

For the first anniversary of Shevchenko’s birth after annexation, the occupation regime refused to allow a gathering at the Shevchenko monument, but did give ‘permission’ for one in Gagarin Park.

Given the detentions and prosecutions that followed, it is worth watching the video of the event here https://youtube.com/watch?v=j0_9MjntQdk . The elderly lady at 1.19 is Klavdiya Ivanivna who says that she has come to at least hear the Ukrainian language which she loves.  She becomes very distressed as she speaks:

People held at least two Ukrainian flags, one with the words “Crimea is Ukraine” Many of the young people present also had balloons in the colours of the Ukrainian flag.

There was heavy police presence and at the end the organizer – Leonid Kuzmin, and two participants - Veldar Shukurdzhiyev and Oleksandr Kravchenko were detained.  They were eventually all charged with ‘infringing the established procedure for organizing or holding a gathering, rally, etc.” and sentenced to 40 hours compulsory labour.  Kuzmin, the head of the Ukrainian Cultural Centre, was also dismissed from his teaching job in a Simferopol school.

During the court hearings, the police officers asserted that the men had been carrying ‘prohibited symbols’.  Lawyer Emil Kurbedinov pointed out to the court that there was no law that prohibited the use of the Ukrainian flag. This was ignored and ‘judge’ Natalya Urzhumova found the men guilty as charged.  (more details here)

Two weeks later, Crimean Tatar national movement activist Kurtseit Abdullayev was sentenced to 20 hours compulsory labour for having held the Ukrainian flag with the words “Crimea is Ukraine” during the same gathering ).

There have been a number of other prosecutions since then, as well as visitations from the ‘anti-extremism’ unit.  Most often the de facto authorities invent some pretext for administrative proceedings.  In August 2015, a young man was jailed for 15 days for supposed breach of the peace early in the morning on Ukraine’s Independence Day when he and another young man and woman tried to photograph themselves with a Ukrainian flag on Mount Mitridat in the centre of Kerch.  It was claimed that they had used bad language.

In August, 2015, as Ukraine’s Independence Day (August 24) approached, the Russian occupation prosecutor warned that ““some radical Crimean Tatar and Ukrainian activists are planning to provoke the Crimean law enforcement bodies to use force by placing Ukrainian symbols in inhabited areas of Crimea and chanting pro-Ukrainian slogans”.  Two people were detained on Independence Day, including Leonid Kuzmin, for laying flowers at the Shevchenko monument.

A large number of pro-Ukrainian activists, involved in the Ukrainian Cultural Centre have been driven out of Crimea through criminal prosecution or threats of violence.

On Monday, Ukrainians from Crimea, including former political prisoners Oleg Sentsov and others, joined in a solidarity meeting in Kyiv at the Monument to Taras Shevchenko.