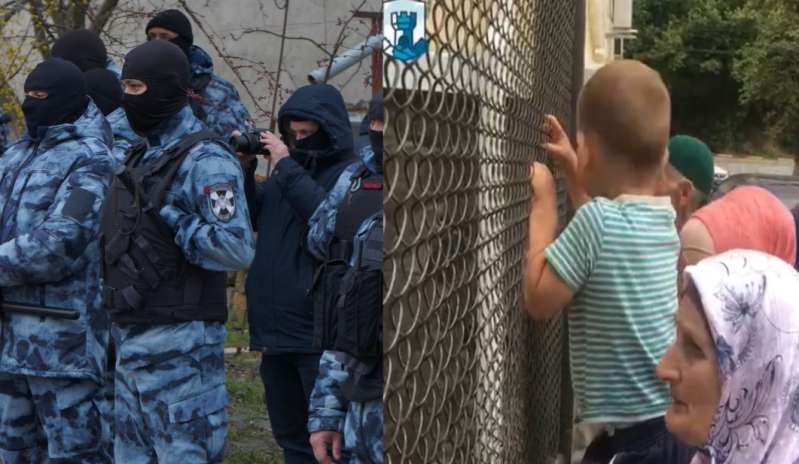 Six years after Russia invaded and annexed Ukrainian Crimea, its FSB has charged 25 Crimean Tatar political prisoners with “planning a violent seizure of power and change in Russia’s constitutional order”.  The 25 civic journalists and activists are clearly supposed to have done this with words alone, since none of the armed searches of the men’s homes exactly one year ago found any weapons and there is no evidence of any actual crime or intention to commit one.

Lawyer Edem Semedlyaev reported on 12 March that they had only learned of the new charge from the investigator during the previous day’s hearing on extending the men’s detention.  Nobody has, as yet, been officially notified of the extra charge, but this is almost certainly a formality.

The new charge is under Article 278 of Russia’s criminal code and punishes for something termed “action aimed at the violent seizure of power … or aimed at violently changing the constitutional order of the Russian Federation”.

Semedlyaev assumes that the charge will give grounds for keeping the men in detention for longer than a year.  That may be the case, however the authoritative Memorial Human Rights Centre has also noted that Russia often uses this charge against those prisoners who refuse ‘to cooperate’ with the investigators.  Such cooperation entails admitting guilt and giving false testimony in exchange for a shorter sentence.  Not one of the Crimean Muslims whom Russia is illegally prosecuting has agreed to such ‘cooperation’, and the FSB is increasingly adding this extra charge in each case.

Virtually all of the 25 Crimean Tatars were involved in the Crimean Solidarity civic initiative which began in response to the ever-mounting number of political prisoners in occupied Crimea.  The men helped take parcels for the prisoners themselves and give vital support for their families, and would also attend politically-motivated court hearings.  Since Russia has crushed all independent media in Crimea and forced professional journalists into silence about rights violations or enforced exile, many Crimean Tatar activists have taken on the role of civic journalists.  Four of the men arrested on 27 March 2019 – Osman Arifmemetov ; Remzi Bekirov; Rustem Sheikhaliev; and Ruslan Suleymanov were all playing a critical role in providing information about the persecution and other rights violations in occupied Crimea.  Bekirov had also recently become an accredited journalist for Grani.ru, one of the few Russian Internet publications that reports on human rights violations in Russia and occupied Crimea.

The FSB raids and arrests on 27 March 2019 and such overt targeting of civic journalists and activists elicited international condemnation.  Human Rights Watch called the arrests “an unprecedented move to intensify pressure on a group largely critical of Russia’s occupation of the Crimean Peninsula” and demanded the dropping of all charges and release of the men.  The human rights group stated unequivocally that attempts “to portray politically active Crimean Tatars as terrorists” is aimed at silencing them.  Freedom House and Civil Rights Defenders called the arrests “yet another serious abuse of power by the de facto authorities, transparently aimed at striking fear into a community that has suffered severely during Russia’s occupation of Crimea”.

Although Russia brought religious and political persecution to Crimea with its annexation, the brazen nature of the armed searches and arrests a year ago signalled a sharp escalation in Russia’s attack on Crimean Tatars and its offensive against Crimean Solidarity.  Not one of the lawyers who sped to the men’s aid was admitted to the homes where armed searches were underway.  There were reports from family members that so-called ‘prohibited literature’ had been planted, and the FSB clearly didn’t want lawyers getting in their way.

23 men were arrested on 27 March, and in the early hours of the following day, however two other civic activists, Rayim Aivazov and Eskender Suleymanov (Ruslan Suleymanov’s brother) were later also taken prisoner.

All are accused of ‘involvement’ in the Hizb ut-Tahrir movement, a peaceful pan-Islamist party which is legal in Ukraine.  Russia is the only country in the world that has declared Hizb ut-Tahrir a ‘terrorist organization’, and has never provided any grounds for such a classification, yet the latter is used as justification for huge sentences on supposed ‘terrorism charges’.   The Memorial Human Rights Centre, which has already declared the men  political prisoners, stresses that Russia has not once, in any of these prosecutions, provided any evidence of “terrorism, or even of plans or discussion of terrorist acts or the use of weapons”.

These prosecutions have been rightly called a conveyor belt of repression, and the fact that some of the men face the harsher sentence appears to be quite arbitrary.  There is equally little justification for the new charge now laid

Ruslan Suleymanov, b. 21.04.1983, is a physics teacher and Crimean Solidarity civic journalist and activist.  He has three children.