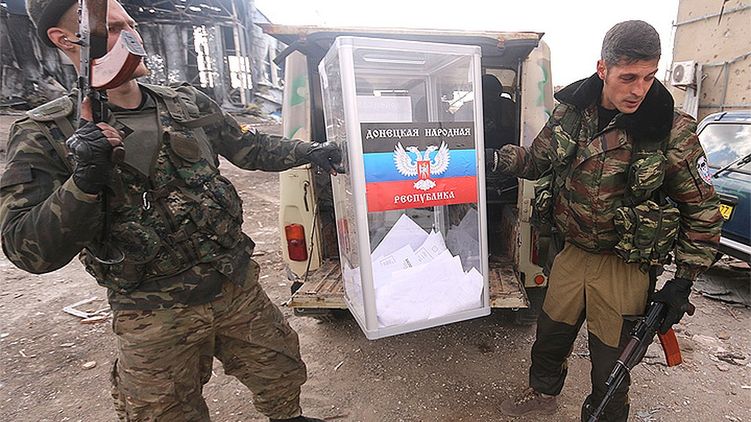 Freedom House’s devastating assessment of the political and human rights situation in the Russian-controlled Donbas ‘republics’ should be compulsory reading for Ukraine’s leaders, as well as for those western partners who are pushing Ukraine to agree local elections on occupied territory. Any such ‘elections’ would take place in a region that got a zero or even negative rating for political rights, in which there is “no room for meaningful opposition” or free speech, and where “the rule of law and civil liberties in general are not respected”.

Freedom in the World 2020 is the first time that Freedom House has separately analysed Eastern Donbas, as it has Crimea since Russia’s invasion and annexation.  This highlights the stark difference between government-controlled Ukraine and the areas of the country which Russia illegally took control of in 2014.  While Ukraine is assessed as Partly Free, with a rating of 62/100, Russia has dragged occupied Crimea and Donbas down not merely to its Not Free status, but to an even lower level of observance of fundamental rights and rule of law (Crimea has a rating of 8/00 and Eastern Donbas has 5/100 against 20/100 in Russia.).

The report was released on 4 March, a week before a political storm broke in Ukraine over a provisional agreement signed in Minsk by Andriy Yermak, Head of Ukrainian President Volodymyr Zelensky’s Office.  This effectively allowed for direct dialogue between Ukraine and militants who are known to take their orders from Russia.  Such an agreement was widely viewed as treating Russia’s military aggression and its proxy ‘republics’ as an internal Ukrainian issue, with the real aggressor state having only ‘observer’ status.

Yermak tried to justify the agreement by claiming that ‘dialogue’ is needed over political steps, such as constitutional amendments regarding ‘special status’ for the so-called ‘Donetsk and Luhansk people’s republics’ [DPR LPR] and local elections.  Movement in both these areas are strongly pushed by Moscow, but local elections are also advocated by France and Germany, with the Steinmeier formula proposing local elections in DPR / LPR, with recognition of these Russian-controlled pseudo republics’ ‘special status’ if the elections are in accordance with Ukrainian law and recognized by the OSCE.

The report shows unequivocally how impossible it would be to hold free and fair elections.   The international human rights NGO examined three questions to determine the state of the electoral process in the self-styled ‘republics’.  The first two pertained to whether the heads of government, and elected representatives were chosen through free and fair elections, the last to whether the electoral legislation and electoral bodies allowed for real choice.  In all cases, the score was a damning 0 out of 4, with supposed ‘elections’ in November 2018 having been flawed, with no meaningful competition.  With respect to the leaders, Denis Pushilin in DPR and Leonid Pasechnik, each was supposed to have received a majority (61% and 68%) respectively, against three or four “obscure opponents”.

The score is equally abysmal with respect to political pluralism. Each of the so-called republics have two officially sanctioned parties with roughly the same agenda.  Other political organizations are not tolerated, even if they are pro-Russian in orientation.

The report’s authors were also in no doubt as to who pulls the strings in occupied Donbas.

“Russia has established a complex web of control over the “People’s Republics” that affects all aspects of daily life, including political affairs. Local media, schools and universities, public services, and business structures are dominated by people loyal to the separatist leadership. While many of them are locals, some key positions are held by Russian citizens. Political control is ultimately enforced by the secretive “state security” ministries of the two entities, which are thought to be directed by Russia’s Federal Security Service (FSB), and the “people’s militias,” which have tens of thousands of men under arms and are believed to be commanded by regular Russian military officers.”

The de facto governments “operate with extreme opacity”, making it difficult to gauge whether they do have any autonomy, or whether Russia takes all decisions.  Both formations are totally dependent on Russia for military and economic support, the authors note.

Whatever the ‘DPR and LPR constitutions’ may say, the actual fact is that “ethnic and religious groups that are not affiliated with Russia face restrictions in practice, and no segment of society is able to organize independently to advocate for its interests in the political sphere.”

Both ‘republics’ get zero out of four with respect to transparency and corruption, with the latter widespread and no effective mechanisms against it.

Some of the details are ominously reminiscent of the Soviet Union under Joseph Stalin. It often becomes clear, for example, that a particular ‘cabinet minister’ has been removed only when the person’s replacement is shown, without any explanation for the change.

Two other areas are of critical importance if considering whether local elections could be held.  You cannot hold fair elections without independent media, and the report’s authors say that these ceased to exist in 2014.  “The local media landscape is now dominated by “official” DPR / LPR broadcasters and websites.”  Reports about the armed conflict quote militants who invariably blame the Ukrainian government with coverage about government-controlled Ukraine also negative.  Another echo from the Soviet Union is in the fact that efforts by Ukraine’s government or independent private media to broadcast in occupied Donbas are blocked through signal jamming.

Stanislav Aseyev and Oleh Halaziuk both spent over two years imprisoned in ‘DPR’ for writing honestly about live in occupied Donbas, and there are numerous other Ukrainians who were taken prisoner essentially for their pro-Ukrainian position.

If all of the above earned occupied Donbas zero ratings, one area received a negative (-1) assessment.   Not only has it become dangerous to profess Ukrainian identity in occupied Donbas, but the ‘republics’ are also changing the official status of the Ukrainian and Russian languages.  The authors mention only a plan to make Russian the sole ‘official’ language in ‘DPR’, however this has now actually happened  (see: Ukrainian stripped of official language status in Russian proxy Donbas “republic” ).

All of the above, as well as the lack of freedom of assembly, clearly make a mockery of any planned ‘elections’ held in accordance with Ukrainian law and international (OSCE) standards.