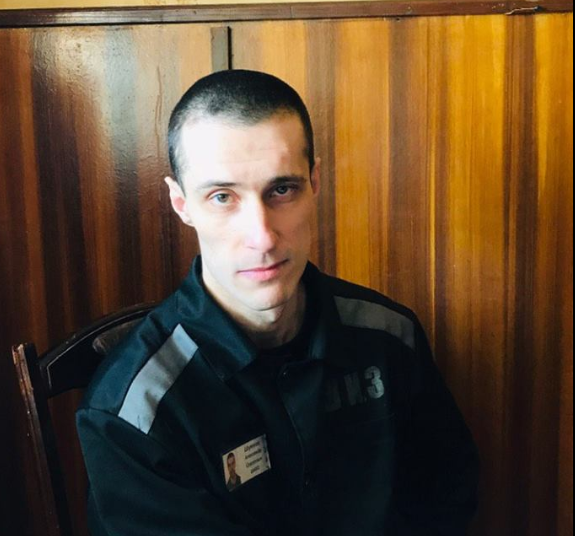 Officers from Russia’s so-called Centre for fighting extremism have appeared at the home of activist Tatyana Kasyanova and interrogated her over her correspondence with Ukrainian political prisoner Oleksandr Shumkov.  This visitation comes two or three months after all letters stopped coming from Shumkov, probably blocked by the prison censor.

Kasyanova told OVD.info that local officers arrived at her home in the Moscow Region, saying that they had received orders from Moscow to question her about her correspondence with Shumkov.  They wanted to know how she knew the Ukrainian; where she had found his address in prison; why she was writing specifically to him; how long this had been going on; and whether they had ever met.   Kasyanova writes to other political prisoners as well, however it was the correspondence with Shumkov that prompted this intrusion.

Lyudmila Shumkova learned on 9 March that a letter they had sent to her nephew had not got past the censor.  She said that this was the second time she was aware of, and believes it likely that this also explains why they have not received any letters from Shumkov for so long, with those also probably blocked by the censor.  This is, of course, in breach of international standards, however so too was Russia’s abduction of Shumkov and politically motivated imprisonment.

Shumkov went on hunger strike in October 2019, demanding “an end to blackmail using us prisoners at negotiations in Minsk and the Normandy format”, and also that the Russian Human Rights Ombudsperson Tatyana Moskalkova finally react to his letters and those from her  Ukrainian counterpart, Ludmila Denisova.  He accused Russia of “blackmailing our people, linking the question of prisoners exchanges with the withdrawal of forces and introduction of amendments to Ukraine’s Constitution.”

Shumkov’s lawyer Alexei Baranovsky reported on 25 October that he had visited the Ukrainian in the prison hospital in Torzhok, Tver oblast to where Shumkov had been moved on 22 October.. He noted that there had been some constructive moves with regard to the prison authorities and the Russian Ombudsperson, and he believed Shumkov might end his hunger strike, which he appears to have done.

There remain many unanswered questions about how Shumkov came to be in Russian custody, but he does appear to have been abducted in late August 2017 from the Kherson oblast and taken by force across the border.  He had been serving in the Ukrainian Armed Forces since 2014 and, since he is a lawyer by profession, had been working as an investigator for the military prosecutor of the Kherson Garrison.  It is believed that he set off for a meeting with an informer who was supposed to provide information about supplies of drugs smuggled from the Kremlin-backed ‘republics’ in Donbas to government-controlled oblasts.  The car in which he was driving came under attack near the Russian-Ukrainian border, with a laser gun used against Shumkov, who was taken, unconscious, into Russia.

Although the Russian authorities deny this abduction, as they have others, there is no possibility that Shumkov would have crossed voluntarily into Russia.  He had taken part in Euromaidan and in 2014 had been a guard for Dmytro Yarosh, the then leader of Right Sector and one of the people Russia most demonized as its aggression against Ukraine mounted. All of this, as well as his role in the military, meant that Shumkov could have been in no doubt of the danger he would face in Russia.