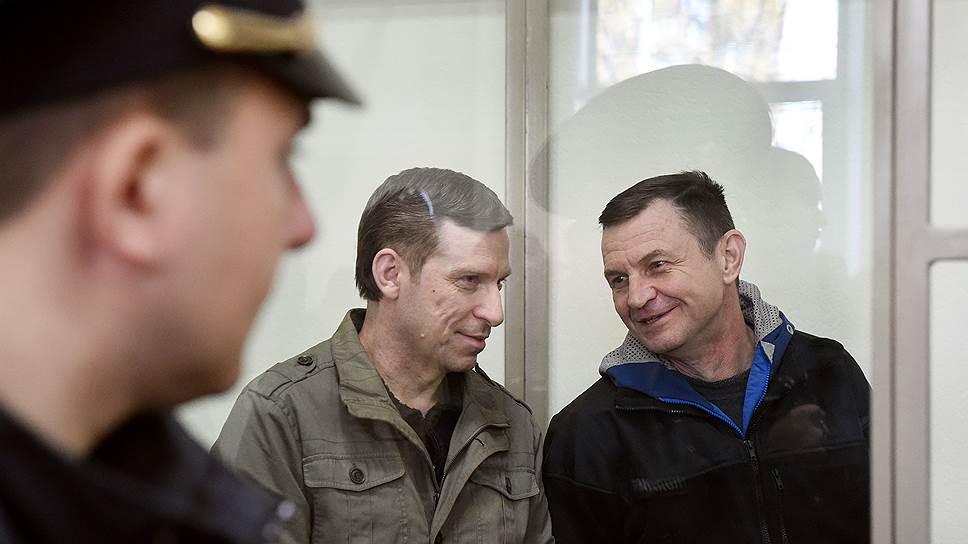 One of the Stalinist echoes in Russia’s invasion and annexation of Crimea has been seen in the use of political trials in which the choice of ‘defendants’ appears to be entirely arbitrary.  Among the huge number of Crimean Tatar and other Ukrainian political prisoners, many have been targeted for their pro-Ukrainian position, their human rights or civic activism, or simply for their faith.  In some cases, however, especially those involving alleged ‘sabotage plots’, the FSB’s casting seems far more erratic.  What is systematic, unfortunately, is the use of horrifically long sentences in reprisal where defendants refuse to admit to crimes that they did not commit.

It was less than two months after its invasion that Russia first began using ‘terrorism’ or ‘sabotage’ plots to intimidate Crimeans or force them out of Crimea, as well as to push Moscow’s narrative about ‘a Ukrainian threat’ from which they were purportedly ‘protecting’ Crimeans.  The first ‘show trial’ – of Ukrainian filmmaker Oleg Sentsov and three other Ukrainians – evidently targeted opponents of annexation.  In the first two years, most of the politically motivated trials were also of Crimean Tatars or other Ukrainians who were viewed as hostile to the Russian occupiers.

That changed dramatically with two waves of arrests in August and November 2016, where the Russian FSB tried to convince Crimeans and the international community that they were defending Crimea against Ukrainian plans to carry out acts of sabotage on the peninsula.

Of four men seized in early August 2016, it seems likely that one person – Yevhen Panov was deliberately targeted for his former role in the Ukrainian Armed Forces and his active pro-Ukrainian position.  That is less clear in the case of the other three - Andriy Zakhtei; Redvan Suleymanov; and Volodymyr Prysich.  What was difficult to conceal and made the charges against the men so preposterous was that the men had never set eyes on each other.  Three of the four men also openly described the torture used against them to force them to make their videoed ‘confessions’.

Two of the men were sentenced on charges that had little or no connection to their ‘confessions’ and served these to the full.  In September 2019, Panov was released as part of an exchange of prisoners which Russian President Vladimir Putin probably agreed to in order to get MH17 witness and suspect, Volodymyr Tsemach out of Ukraine.  Andriy Zakhtei remains imprisoned, serving a 6.5 year sentence.

The FSB had learned their lesson, and with the arrests in November 2016 went for three men who knew each other well:  academics Dmytro Shtyblikov and Oleksiy Bessarabov, and retired naval captain Volodymyr Dudka.   Around ten days later, they arrested two younger men – Oleksiy Stohniy and Hlib Shabliy -  who shared the same former Ukrainian military background.  Attempts to link the latter two men did not prove convincing, despite the torture used to extract ‘confessions’.  Both were convicted of charges that seemed very different to the videoed statements.  Stohniy was recently released after serving his 3.5 year sentence, while Shabliy received a 5-year sentence and is still illegally held in a Russian prison.

On November 9, 2016, the FSB widely circulated videos showing the arrest, search and ‘confession’ of Shtyblikov, and the ‘confession’ of Bessarabov, his colleague and friend.  It was learned that a third person – former naval captain Volodymyr Dudka, had also been arrested.

Shtyblikov, who is now 50, was designated the role of ‘ringleader’ of a supposed sabotage plot, and was essentially prevented from seeing an independent lawyer for over a year.  It seems extremely likely that physical or psychological pressure was used to obtain his agreement to admit the charges.  He was sentenced, on 16 November 2017, to five years’ maximum security imprisonment after a ‘trial’ (under presiding judge Gennady Vladimirovich Nikitin)  that took all of 50 minutes.

55-year-old Dudka and Bessarabov (43) did, at least, have lawyers.  Both men categorically rejected the charges against them, with both they and their lawyers pointing out the shocking irregularities and falsifications in their case.  Both men also spoke of the electric shocks used initially to torture them.

It was claimed, for example, that ‘biological traces’ from both defendants had been ‘found’ on a map of the city which allegedly showed the places where the men were supposed to have been planning acts of sabotage.  An expert analysis, however, demonstrated that the traces were only on the edge of the map and not over the entire surface, which made no sense if this were really, as asserted, a map that the men were using.

Both men had previously complained that illegal methods had been used to obtain biological traces.  Saliva and other samples were taken without any protocol being drawn up and without his lawyer present.  Under such circumstances, it would be easy to later use the samples to fabricate incriminating evidence.

Despite the lack of any convincing evidence and testimony of torture, both men were sentenced on 4 April 2019 to 14 years, with the sentences almost certainly so high because they had refused to ‘cooperate’ with the FSB.  That sentence, passed by ‘judges’ Igor Vladimirovich Kozhevnikov; Vasily Aleksandrovich Avkhimov; and Vladimir Ilych Reshetnyak, was upheld on 15 October 2019 by Russia’s Supreme Court.

Dudka in particular has serious medical issues and is in enormous discomfort.  Having understood what they have to expect from ‘Russian justice’, he and the others are pinning their hopes on a prisoner exchange.

LETTERS ARE A LIFELINE!

It is not possible to write to Andriy Zakhtei as he is held in occupied Crimea and at present it is not clear where Hlib Shabliy is, but PLEASE WRITE to Oleksiy Bessarabov; Volodymyr Dudka and Dmytro Shtyblikov!