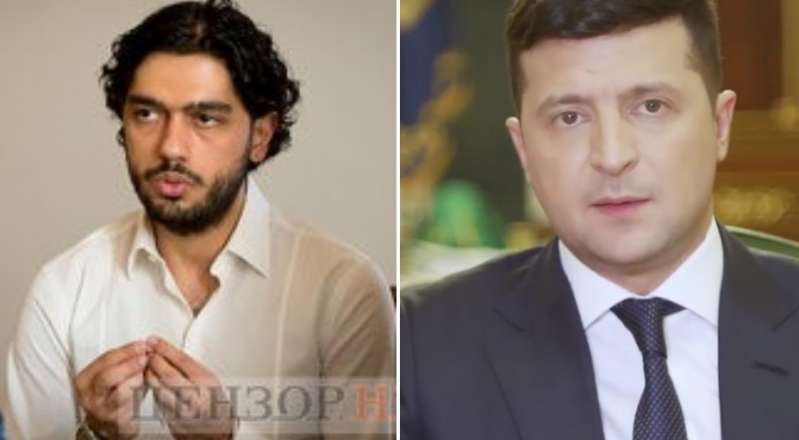 Geo Leros was dismissed from his position as adviser to Ukrainian President Volodymyr Zelensky less than 24 hours after an interview in which the people’s deputy (MP) criticized a recent agreement provisionally reached in Minsk.  Since Zelensky can still back away from what Leros, other MPs and very many civic groups and members of the public see as a betrayal of Ukraine’s national interests and capitulation to Russia, such a reaction from the President is alarming.

As reported, it was thanks to the media that Ukrainians learned, with a delay of two days, about the agreement reached in Minsk on 11 March, and signed by Andriy Yermak, head of Zelensky’s administration, and Ukraine’s representative at the Trilateral Contact Group, ex-President Leonid Kuchma.   This envisages the formation of an ‘Advisory Council’, with 10 representatives from Ukraine and 10 from the self-proclaimed ‘Donetsk and Luhansk people’s republics’ [D/LPR].  Despite Moscow’s evident political, financial and military control over these pseudo ‘republics’, Russia would have only ‘observer status’, like that of the OSCE, Germany and France.

In the Censor.net interview, Leros said that he was initially convinced that this was a fake, and reeled when he learned that it was genuine.  There is a danger, he says, that through his signature under this agreement, the head of the President’s Office is de jure accepting D/LPR as a party and agreeing that Ukraine can sit at the negotiating table with them on an equal footing.  This is in conflict with Ukrainian legislation.  “There are temporarily occupied territories of Ukraine with Russian occupation administrations.  Why the head of the President’s Office should be consulting with some kind of D/LPR, instead of Russia, I don’t understand and nor do many in the Servant of the People faction, and many citizens of our country. If we had really been dealing with an internal conflict, and not a war with the Russian Federation, we would have resolved it back in 2014 when the Armed Forces [officially: the forces of the Anti-Terrorist Operation]  had successfully liberated Ukrainian territory from the terrorists.  It took the Ilovaisk Tragedy for the government to recognize that the war was with regular soldiers of the Russian Federation without insignia, and not with local ‘insurgents’.”

Leros stresses that “we must not blindly live according to a plan written in the Kremlin”.  He recalls the conflict between Finland and the Soviet Union when the latter threatened to seize the entire country if Finland did not allow it to have a military base and give up part of its territory.  The Finns understood the danger and the impossibility of beating the USSR, and saw their only option as being to force the Soviet Union to pay as high a price as they could.  This, Leros mentions, was because they were counting on help from their allies.  The latter never came, he adds, noting that this is also similar to Ukraine’s situation.  After a heroic war, a “new agreement with the Soviet Union was signed, not with the best of conditions, but they retained their country, they affirmed their national interests. History teaches us that we need to fight for the country and not lose our national identity.  Peace at the price of abandoned national interests and the legalization of terrorists on Ukrainian territory, such as, for example, amnesty for murderers who, together with the Russian military, killed Ukrainians is, in my view, unacceptable. A person who puts such a plan on the President’s desk is openly setting him up.”

Leros was one of 60 ‘Servant of the People’ MPs who signed a statement on 13 March stressing that any direct dialogue with the proxy ‘republics’ was unacceptable and in breach of Ukraine’s Law on occupied territory in the Donetsk and Luhansk oblasts which clearly identifies the Russian Federation as occupying this territory.

He was also one of 19 deputies from his faction who signed an appeal to the Secretary of the National Security and Defence Council, Oleksiy Danilov, asking him to dismiss his adviser Serhiy Syvokho.  This was in response to Syvokho’s labeling the war in Donbas as “an internal conflict’.

Leros says that the MPs met with Yermak and put their position, both with regard to the Advisory Council and about Syvokho.  Yermak, he says, did agree with them that such “dialogue platforms should not be linked with the state, they are necessary, but cannot determine state policy.”

As mentioned, Yermak has been trying to find a palatable explanation for the agreement since its content was first reported in the Ukrainian media on 13 March, although with little success.  As Freedom House has noted in their latest report, there is no pluralism and no freedom of speech in occupied Donbas, and the membership of any ‘advisory council’ would be decided by the militants and those who control them in Russia.  There has been suggestion that half of the number of members from the Donbas side would be made up of ‘internally displaced persons’, forced to leave Donbas.  How this would be organized so that the militants (and Russia) agreed, is quite unclear, as too is whether this is a serious proposal.

Leros stresses that during their meetings with Yermak, they were not just presenting the point of view of a certain number of MPs, but “the ideology with which we went to the elections, and the principles on which the election campaign of the President and Servant of the People was based”.

On 19 March, asked whether there had been discussion with President Zelensky on the agreement, Leros answered no, but that they were hoping for such dialogue.  He said that there were far more MPs who are concerned about the issue than those who signed the letter.  “We make up one team with the President, but there are people who are setting him up”.   He drew an analogy between those who are trying now to find a vaccine for coronavirus, and those who, in the middle of a pandemic try to illegally export surgical masks from Ukraine, “making money out of a human catastrophe”.  Such individuals, he says, should not be in power.

Asked what he will do if the Advisory Council is formed and Ukrainian representatives sit down at the negotiating table with terrorists, Leros asked a counter-question.  “What do you think Ukrainians will do if such a legalization of terrorists takes place? I will say only that this must simply not be allowed.”

The agreement can, until 25 March, be amended or rejected outright.  It is not clear what Zelensky is planning, but his decree on 20 March, dismissing Leros from his post as (non-staff) advisor is disturbing.  No explanation was provided – expect by Leros himself, who commented on Facebook that Yermak had clearly read his interview.