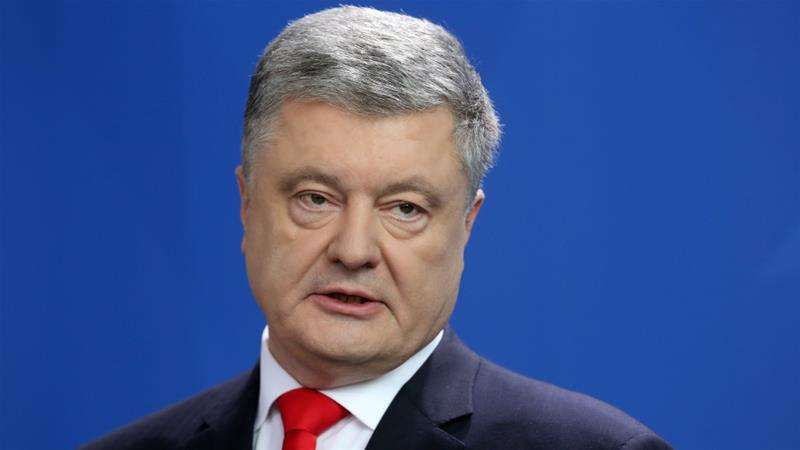 The Russian proxy ‘‘Donetsk people’s republic’ [DPR] has placed Ukraine’s former President Petro Poroshenko on its ‘wanted list’, accusing him of involvement in the killing in October 2016 of notorious Russian mercenary Arseny Pavlov (‘Motorola’).  Such ‘charges’ need not give Poroshenko any sleepless nights, however the announcement on 25 March coincided with a reminder of no less extraordinary charges brought against the ex-President by Ukraine’s State Bureau of Investigations [DBR in Ukrainian].  The reminder came in an interview given by former Prosecutor General Ruslan Riaboshapka who many believe was replaced because he refused to sign an indictment against Poroshenko.

The self-styled ‘DPR prosecutor general’ has initiated what are called criminal charges against Poroshenko “on suspicion of organizing the murder of Hero of the Republic, lieutenant Arsen Pavlov (nom de guerre ‘Motorola’)”.  The Russian-controlled militants’ ‘hero’ and ‘lieutenant’ was a Russian mercenary who was wanted in Ukraine for a number of suspected war crimes, including the killing of prisoners of war in cold blood.  In the militants’ version of reality, it is Poroshenko was is accused “of organizing terrorist activities”.  Russia has followed its proxy ‘republic’ in glorifying a man who killed for money and, seemingly, pleasure.

Pavlov had the blood of many Ukrainians on his hands, and it is possible that either Ukraine’s SBU [Security Service] or Ukrainian partisans were behind the bomb blast that killed him on 16 October 2016.  It is, however, hard to imagine that the President of Ukraine directly organized a killing.

The State Bureau of Investigations began initiating criminal proceedings in respect of Poroshenko soon after the inauguration of Volodymyr Zelensky as President in the middle of 2019.  The prompt for virtually all of the 14 investigations that had been started by mid-December appears to have come from Andriy Portnov, former Aide to ex-President Viktor Yanukovych, who arrived back in Ukraine on the eve of Zelensky’s inauguration.  Although Portnov had made no secret of his intention to go after Poroshenko, it was disturbing that the State Bureau of Investigations kept very publicly initiating criminal proceedings, however questionable the grounds.  The first claim Portnov made on his arrival in Ukraine almost directly parroted Russian President Vladimir Putin’s narrative used to justify Russia’s attack on three Ukrainian naval boats and taking as POWs of 24 Ukrainian  seamen on 25 November 2018. The Bureau’s insistence on ‘investigating’ this was merely playing into Putin’s hands and helping Russia’s propaganda media.

In December 2019, the State Bureau of Investigations initiated a criminal investigation against Poroshenko under the article on ‘state treason’ over ‘the Minsk II Agreement’ in February 2015 (details here)

New charges were announced on 4 March 2020, and it was these that Riaboshapka refused to sign, and which, in an interview on 25 March, he called “legal rubbish”; unlawful and unwarranted. He said that his signature could have prompted charges against him, since the document outlining the ‘suspicions’ was unlawful and without any foundation or proof to back the charges.  Unfortunately, he considered it likely that his replacement, Iryna Venediktova, would sign a document that she had, in all likelihood co-authored while Acting Director of the State Bureau of Investigations before her appointment as Prosecutor General in March.

The charges in question are of “seizing power and abuse of power”.  Two episodes, both involving appointments, are involved.  One was his appointment of the deputy head of the Foreign Intelligence Service, the other – of two members of the High Council of Justice. The investigators are claiming that these decisions on staffing were taken with infringements of the law and in order to seize power, based on his supposed “wish to establish the kind of state regime under which state power is concentrated in the hands of a group of people who are not under public control, or in the hands of one person”.   As mentioned, Riaboshapka sees absolutely no justification in such charges and no proof.

There was consternation within Ukraine and from abroad over the earlier charges against Poroshenko which seemed ominously reminiscent of the ‘selective justice’ condemned in the prosecutions by the Yanukovych regime of his main rival, the former Prime Minister Yulia Tymoshenko and members of her government.  The sheer volume of quite different proceedings alone against Poroshenko is disturbing, and makes it hard not to see a political component in the very strange criminal prosecutions now likely to be signed into force.