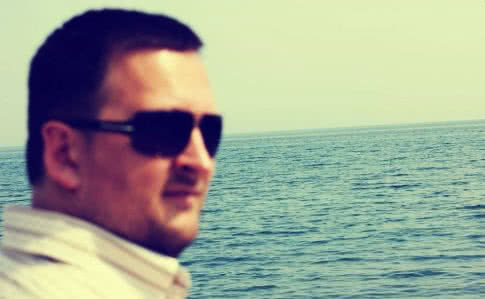 Denis Kashuk has been sentenced to 3 years and 8 months’ imprisonment by a ‘court’ in Russian-occupied Crimea just four months after he disappeared in suspicious circumstances.  The 40-year-old Ukrainian made it clear back in December that he had agreed to plead guilty in order to protect his family, and there is every reason to doubt the charges and his supposed collaboration with Ukraine’s military intelligence.

In a single hearing on 6 April, 2029, ‘judge’ Larisa Likhacheva from the Armyansk District Court found him guilty of possession of ammunition and explosive substances (Articles 222 § 2 and 222.1 § 2 of Russia’s illegally applied criminal code); and smuggling of explosives (Article 226.1).  Lawyer Sergei Legostov has said they will not be appealing against the sentence, and calls the three year and eight-month sentence reasonable given the three charges.  It is, in fact, almost identical to the sentences against two of the five Ukrainians seized in another ‘Ukrainian saboteur’ case in November 2016.  Then and here the actual charges seemed rather different from the crimes that Oleksiy Stohniy; Hlib Shabliy, and Kashuk ‘confessed to’.

In Kashuk’s case, he stated that in the Spring of 2016 he had applied to renew his Ukrainian passport in Kherson and had been invited for a chat by officers from Ukraine’s military intelligence (HUR). During this conversation, he was told that the advertising agency where he was working had carried out several contracts for the Russian occupation authorities.  He was told that this constituted collaboration with the occupation regime and that he could rectify the situation by providing HUR with information they needed.  He asserted that he had been forced to agree, and that in November 2017 he had been given literature about various forms of explosives, and trained in using a pistol and machine gun.  He claimed that on the same day, he had returned to Crimea, being given a plastic bag with a liquid explosive substance and explosives concealed in washing powder.  He had purportedly communicated with the HUR officer via WhatsApp, and had repacked the explosives and hidden them in two different hiding places.

There is no evidence to back these charges, only the testimony of a person who was seized at least 24 hours before the FSB admitted to having detained him.  In most cases, including those against a number of Ukrainians accused of ‘sabotage plots’ and working for HUR, the men have stated that they gave such testimony under torture.  While physical torture may well have been applied, Kashuk also told his mother, during a court hearing on 20 December, that he had agreed to plead guilty in order to protect his family from persecution.

Kashuk set off for work in a Simferopol advertising agency on 17 December 2019, and vanished.  His wife, Olha contacted the police that evening, who said nothing about him being detained, but instead turned up and took a toothbrush for a DNA sample.  The following morning, the FSB arrived and carried out a search of the Kashuk home, informing Olha Kashuk that her husband was suspected of preparing explosives.  It is most implausible that the Russian-controlled police had not known where Kashuk was, and in almost all Russia’s ‘Ukrainian saboteur’ political trials, DNA samples, obtained illegally, have later been used as ‘evidence’ against those arrested.

On 27 December, having left Crimea, Kashuk’s mother, Kateryna explained to Krym.Realii that the family is pro-Ukrainian, and said that the five years (under occupation) had been very difficult.

She is convinced that the FSB used both physical and psychological pressure on her son and explained that during her brief conversation with Denis, before the court hearing on 20 December, he had asked that the entire family leave Crimea immediately.  The FSB had clearly told him that “denunciations” against them had been received.