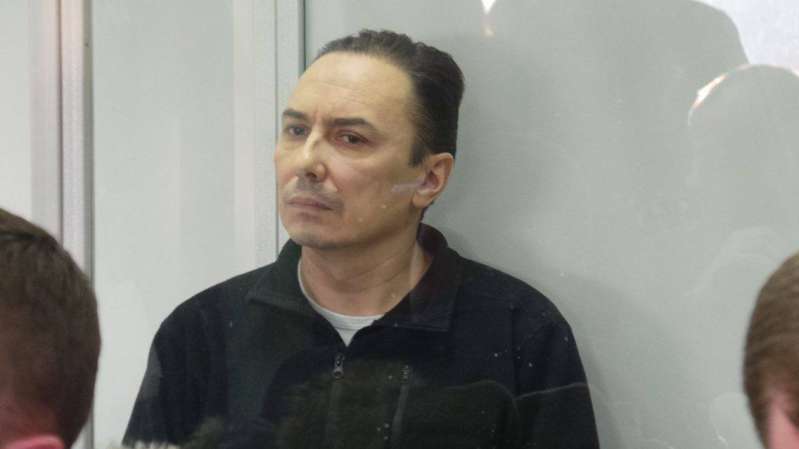 A court in Kyiv has sentenced former Ukrainian military intelligence officer Ivan Beziazykov to a huge 13-year sentence on charges which well-known lawyers and rights activists believe have not been proven.  The charges pertain to the 23 months that Beziazykov was held prisoner in the self-proclaimed ‘Donetsk people’s republic’ and under the total control of the militants.

49-year-old Beziazykov is a professional military officer, who in 2014 was a lieutenant in Ukraine’s Armed Forces and the head of an intelligence unit.  He was taken prisoner, together with two subordinates, on 16 August 2014 after a battle near Stepanivka, where Ukrainian soldiers had been killed or wounded.   Carrying a white flag, the men had approached militants to organize retrieving their fallen colleagues’ bodies. Despite initial agreement from one lot of militants, they were seized by some other fighters, obviously from the Russian Federation (with Ossetian or Chechen accents).

Beziazykov’s account of the torture (“for no purpose”) he was subjected to corresponds closely with that described by other former POWs and hostages, as well as by Ukrainian political prisoners held in Russia or occupied Crimea.  In many cases, men have later retracted testimony which they gave under torture.

Beziazykov says that he saw no sense in concealing either the fact that he was in command or his name, since the militants would simply use torture against him or his men to obtain the information.  Having ascertained his rank (and understood that he was no rank and file soldier), they held him separately from his two subordinates who were exchanged over the following year.

Virtually nothing was heard from Beziazykov during that period, though he was able to phone his wife briefly in May 2015.  Then in April 2016, he called her again and asked that he be added to the exchange list.  He returned home on 5 July 2016, and at that stage, was treated as a hero, and videoed at a meeting with President Petro Poroshenko.

He was arrested on 12 December 2016 and initially accused of collaborating with the DPR militants.  The more serious charge, of state treason, was added later. He and his lawyers assert that this was after the SBU [Ukrainian Security Service] tried to get him to give essentially false testimony, about the downing of the Malaysian MH17 airliner, or about financing of terrorism (which Ukraine is accusing Russia of, in a court case before the UN’s International Court of Justice).

He has been in custody since December 2016, with the court trial having dragged on for over two years.  The sentence passed at the Shevchenkivsk District Court on 7 April 2020, by presiding judge Lidiya Shchebunyaeva, together with Vitaly Tsyktich and Oksana Holub is only the first stage.  It will be appealed, with the defence adamant that, if necessary, they will approach the European Court of Human Rights.

The SBU, and then the prosecution, asserted that, while in captivity, Beziazykov had changed sides and helped the militants to recruit Ukrainian POWs.  They claim that he became deputy head of ‘DPR Intelligence’ on 25 August 2014 (10 days after being taken prisoner) under Oleh Shlyapin (nom de guerre ‘63rd’), a former Donetsk judge who betrayed his oath and joined the militants.  They were, the prosecution asserts, led by  Sergei Dubinsky, a Russian ‘former’ military intelligence officer and one of the four men now on trial (in their absence) in the Netherlands for their believed role in the downing of MH17.

Beziazykov rejects the charges.  He says that he never denied that the militants had tried to get him on their side, but is adamant that they failed.

According to his version, from 25 August 2014 until the end of September, he was held in the basement of one of millionaire Rinat Akhmetov’s dachas seized by the militants.  He says that he was taken from there each day to the so-called ‘DPR intelligence unit’ where he spoke with Shlyapin and Dubinsky.  Beziazykov insists that he was totally under the control of these militants, and says that the person named in court as his ‘driver’ was, in fact, the convoy guard bringing him from his place of imprisonment.  He asserts that he was forced to carry out certain paperwork, to hold telephone conversations, etc.  As a military intelligence man, he was aware that any such calls were being listened to, and says he hoped that the SBU would understand where he was and help to get him out.  He is adamant that he never said anything that could hurt Ukraine during the course of such calls.

The calls were, indeed, intercepted, and appear to be one of the main pieces of evidence presented against him, although it seems more the fact that they took place that is brought against him, rather than their content.

The defence maintained that, while held prisoner, Beziazykov used his intelligence skills to gather information.  After his release in 2016, he asked to be questioned in the SBU and that information be provided to Ukraine’s Military Intelligence.  Shortly afterwards he met with members of the Joint Investigation Team on the downing of MH17.  He was seized by the militants a month after the disaster, but was able to provide information about two of the men now on trial in the Netherlands – Dubinsky and Oleg Pulatov (who is also Russian).

Beziazykov was represented by Oleh Veremiyenko and Vitaly Tytych.  The latter is the coordinator of the Public Integrity Council, a civic judicial watchdog, and came to the case  later, offering to represent Beziazykov for free.

In the lawyers’ view, the prosecution did not provide any direct evidence that Beziazykov had collaborated with the militants.  Most of what there is, they say, is essentially hearsay.   The key witness, officer Ruslan Kosinsky seems to have consistently claimed to have seen Beziazykov in uniform, but given two very different statements about what such uniform consisted of.

The Media Initiative for Human Rights, which has closely followed this case, say that they have spoken with many freed POWs.  The vast majority say that they were forced to work for the militants, with their account differing little from that given by Beziazykov.