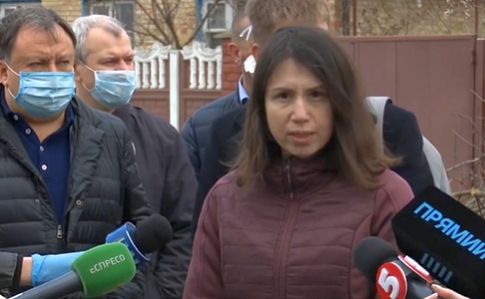 Ukraine’s increasingly controversial State Bureau of Investigations has informed  Tetyana Chornovol, a former MP, journalist and victim of a near-fatal attack during Euromaidan, that she is under suspicion of murder.  Chornovol has reacted with anger, saying that she is being persecuted by the same people who, in December 2013, tried to kill her.  She believes this is part of efforts to rewrite the history of the Revolution of Dignity, as the Maidan (or Euromaidan) protests became known, and political repression for her role in Maidan.

Officers arrived at Chornovol’s home in the morning of 10 April and carried out a search.  They asked to see clothes that she wore during Maidan, and took away a jacket, helmet and backpack.  They also removed a trophy weapon and telephone, both of which, Chornovol believes they had no right to take.

The State Bureau of Investigations [SBI] identified Chornovol only as a former MP and said that she was suspected “of deliberately and illegally causing the death of another person, with this committed on the prior conspiracy of a group of people in a way that endangered the life of many (Article 115  § 2.5 and § 2.12 of Ukraine’s Criminal Code).” SBI writes that Chornovol is suspected of having led a group of people on 18 February 2018 and taken a direct part in setting alight a building in the centre of Kyiv containing the offices “of one of the political parties”.  As a result of the fire, a 66-year-old  employee died.

The court order, issued by the Pechersk District Court in Kyiv, mentions 8 different charges, and Chornovol notes that several envisage sentences of between 5 and 15 years’ imprisonment.  The SBI itself says, that if the charges are proven, the suspect faces a sentence of from 10 to 15 years, or life imprisonment.

The SBI statement makes no mention of the hardly irrelevant fact that the fire was started on one of the bloodiest days of Maidan, the first of two days when peaceful protesters were gunned down.

Chornovol does not deny setting alight the office of the Party of the Regions, which was then President Viktor Yanukovych’s ruling party, but rejects any accusation of involvement in murder.  She says that she and her husband were trying to distract the attention of enforcement officers in order to save Maidan activists and to set the ‘titushki’, or government-hired thugs away from others and onto them.

Yuri Butusov, Chief Editor of Censor.net, approached Serhiy Horbatyuk, the former Director of the Department for Special Investigations which was in charge of most Maidan cases, for his comment.  Horbatyuk was scathing in his criticism.  He explained that his department had carried out an investigation into the arson attack on the Party of the Regions office, and had undertaken the necessary expert assessments.  The person who died, Volodymyr Zakharov, had had plenty of time to leave the building, and there were no obstructions put in his way.  It was because he began collecting the CCTV camera footage (whether on his own initiative or on somebody’s instructions) that he died of smoke inhalation.  There are no grounds, Horbatyuk believes, for laying charges of murder over Zakharov’s death and, indeed, he says that the evidence directly contradicts such a conclusion.  According to Butusov, Horbatyuk went on to say:

“Furthermore the notification of suspicion has not been issued by the department of the State Bureau of Investigations which is dealing with Maidan cases, but another division which has never been involved in investigating these events in their entirety.

The bringing of baseless charges against Tetyana Chornovol contain elements of a crime from representatives of a law enforcement body in the ‘best’ traditions of the unlawful prosecutions of Maidan activists in 2014.”

Either Horbatyuk or Butusov states that it is the head of the SBI Kyiv territorial department, Ruslan Marchuk who bears direct legal liability for these “unlawful charges” against Chornovol.  Butusov, however, adds that it is President Volodymyr Zelensky who bears political responsibility since he approved the appointment as Deputy Head of the State Bureau of Investigations of Yanukovych’s lawyer, Oleksandr Babikov and he is helping Andriy Portnov, the former Head of Yanukovych’s Administration, to exert political influence on SBI.

Portnov has made no secret of his wish to see all cases against those who persecuted Maidan activists terminated.  He has also very aggressively claimed that there have been no attempts to investigate the deaths of Berkut officers (a claim that Horbatyuk and other investigators reject.)   This attempt to bring murder charges against a very prominent Maidan activist against the evidence does seem, at very least, sinister.

See:  Who is behind the campaign to discredit Maidan and turn its victims into perpetrators?

The case – and horrific images of the beaten journalist who would surely have died had her car not been noticed – caused international outcry, especially given Chornovol’s exposures of corrupt dealings and / or the sumptuous homes of Yanukovych, his Prosecutor General Viktor Pshonka, Interior Minister Vitaly Zakharchenko and others.  Ukrainska Pravda spelled out the suspicions very clearly in an article entitled: “Yanukovych, Azarov, Firtash, Zakharchenko – who Chornovol writes about, or People whom we suspect of ordering [the attack]”

By early February, the so-called investigation had turned into farce with the Prosecutor General’s Office claiming to have ‘solved’ the case, and found the attack to have been ‘hooliganism’, a case of road rage after Chornovol cut in front of another car.   It announced that another suspect, Andriy Zinchenko had been detained at Ukraine’s request in Moscow.  Chornovol responded immediately saying that it was Yanukovych that she had “cut in front of”, and promising that she would continue to do so.  She later stated clearly that she believed Yanukovych to be behind the attack on her.  She was convinced, furthermore, that the aim had been to kill her.

Chornovol’s husband, Mykola Bereza, whom the SBI is claiming was part of “a group conspiracy”  volunteered soon after Russia began its aggression in Donbas and was killed, defending Ukraine, on 10 August 2014.