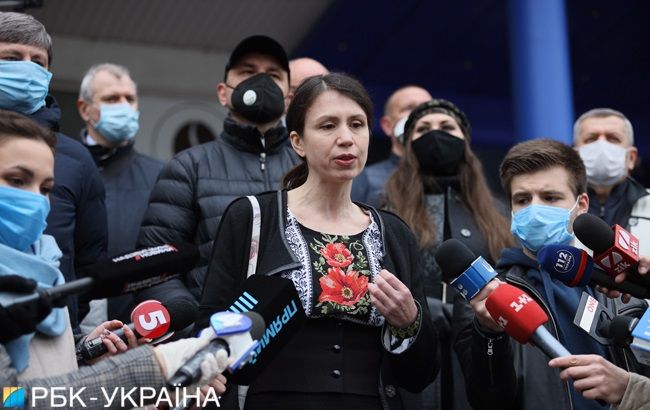 The claim by Ukraine’s State Bureau of Investigations that its charges against Tetyana Chornovol are not political might have seemed a little more convincing had they not closely followed the argument used by ex-President Viktor Yanukovych’s defence lawyers.  It is precisely this that makes the SBI’s denial that its First Deputy Director, Oleksandr Babikov played any role in the move seem as lacking in credibility as earlier efforts to deny the irrefutable fact that Babikov was one of Yanukovych’s defence lawyers.

As reported, on 10 April SBI announced that it had informed Chornovol, a prominent Maidan activist, anti-corruption investigative journalist and ex-MP, that she was suspected of murder.  The charges pertain to the setting alight of the offices of the then ruling Party of the Regions on 18 February 2014, one of the two bloodiest days of the Euromaidan protests.   Serhiy Horbatyuk, former Director of the Special Investigations Department stated that same day, and has since reiterated, that his department had investigated the fire and that, on the basis of the material gathered, he saw no grounds for the charges now brought against Chornovol.  Horbatyuk said, for example, that Zakharov, who had been in the building, had had plenty of time to leave, and could have done so unobstructed.  He had, unfortunately, stayed to collect the CCTV cameras, and had died of smoke inhalation.  While stating that he would not comment on possible motivation, Horbatyuk did point out that there is criminal liability for wrongful prosecution.

Chornovol is a well-known figure and the savage attack on her in late December 2013, which was almost certainly intended to be fatal, was widely reported in Ukrainian and international media.  So too was the news of these extraordinary charges with very many people agreeing with Chornovol that this was an attack on Maidan activists in general, not only on her.

On 14 April, with Chornovol having been summoned for questioning and with a court hearing due into the SBI’s application for her to be placed under 24-hour house arrest, an SBI statement appeared on the Bureau’s official site, claiming in the title that SBI is apolitical.  The statement began by asserting that “according to the material of criminal proceedings and the established chronology of events, the shootings on Madan and adjacent Kyiv streets on 18.02.2014 began after the setting alight of the Party of the Regions office”.

It then goes on to assert that the case of “the killing of Volodymyr Zakharov” was investigated from 18.02.2014 to 15.11.2017 by police investigators who formed the main file of evidence.  This changed, they say, after Prosecutor General Yuri Lutsenko placed the case under the jurisdiction of the Special Investigations Department under the leadership of Horbatyuk.  The statement claims that no investigative activities were then carried out.  It is claimed that, since Lutsenko had said that he had been present during the events on 18 February 2014, that he should not have taken any procedural decisions “due to a conflict of interest”.

The unsigned SBI statement then goes on to fight those who have pointed to Babikov’s obvious conflict of interest, given his role in Yanukovych’s defence.  It is asserted that “according to the Criminal Procedure Code”, Babikov is not the head of the investigation body, does not take procedural decisions and does not influence the criminal proceedings against Chornovol.  Many words are expended on disputing a claim by Lutsenko regarding Babikov’s role in the Yanukovych defence team.  Whether or not the specific claim was inaccurate is neither here nor there since there is considerable documentary proof of Babikov’s involvement in the defence.  This proves that both he and his employer, the then Acting Director of SBI and now Prosecutor General, Iryna Venediktova were more than sparing with the truth.  The Advocacy Advisory Panel reported on 10 April that they had received a response from the National Agency for Corruption Prevention, confirming both Babikov’s role in the Yanukovych defence team and the fact that he had a private interest in that case.  Whether or not he himself is now directly involved in the Yanukovych trial, or in any Maidan investigations, that very recent involvement cannot be brushed aside.

Yevhenia Zakrevska, a lawyer representing Maidan victims or their families, responded to the SBI statement by noting that it followed the claims made by Yanukovych’s defence team during his trial in absentia.  The position, which is that also pushed by Moscow, is that Euromaidan was a coup d’état, and that the violence and gunning down of protesters began after the setting alight of the Party of the Regions office.

The SBI statement is disturbing precisely because there was no apparent need to make its first claim, which implies a cause and effect relation between the arson attack (which Chornovol does not deny she and her husband were involved in) and the violence against Maidan activists.  There is nothing in the charges against Chornovol to explain why this is required.

The claim is also refuted by Maidan investigator Oleksiy Donsky who was Horbatyuk’s deputy in the Special Investigations Department.  He says that the investigators established that at the time that the Party of the Regions building was set alight, there had already been cases of mass use of violence against protesters, both by the enforcement bodies, and by the so-called ‘titushki’, or government-hired thugs.  Chornovol has said that she and her husband were trying to distract the attention of enforcement officers in order to save Maidan activists and to set the ‘titushki’, or government-hired thugs away from others and onto them.

The chronology claim is thus both irrelevant and incorrect.  The entire statement seems disturbingly manipulative, creating the erroneous impression that Maidan activists began the violence; that Lutsenko, essentially with the Special Investigations Department’s help, sabotaged an investigation by the police which had collected all the evidence.  It is t is now being acted upon by the State Bureau of Investigations.

This is in flagrant conflict with the facts, and not only those pertaining to the chronology of events on 18 February 2014.  It was the Special Investigations Department, under Horbatyuk and Donsky, that achieved any of the progress in Maidan investigations., with such progress repeatedly sabotaged or blocked by, among others, the Interior Ministry and Prosecutor General.

The criminal charges against Chornovol and the attempt to undermine the work carried out by the Special Investigations Department are the latest moves to elicit warranted fears that an attempt is underway to rewrite history and turn Maidan heroes into perpetrators.  This would help Yanukovych, but is also playing to Moscow’s tune, and it is no accident that the main channels which have been engaged in a campaign to discredit the Revolution of Dignity (Euromaidan) are linked with Viktor Medvedchuk, the  contentious and rich Ukrainian MP with close ties to Russian President Vladimir Putin.

One of the most vocal advocates for terminating all current Maidan investigations against members of the enforcement bodies, Yanukovych and others, is Andriy Portnov.  He was deputy head of Yanukovych’s administration during the Maidan protests and only returned to Ukraine on the eve of President Volodymyr Zelensky’s inauguration.  That he should now be trying to discredit Maidan and its heroes is perhaps to be expected.  What is much less obvious, and deeply worrying, is how, under the current administration, Portnov appears to exert considerable influence on appointments and investigations, including those against Zelensky’s predecessor, in the State Bureau of Investigations.