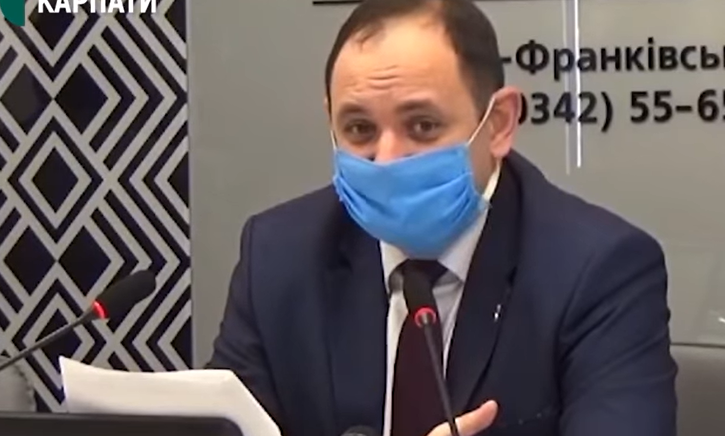 There has been outrage in Ukraine after Ruslan Martsinkiv, the Mayor of Ivano-Frankivsk, was heard on video demanding to know why the Roma from Ivano-Frankivsk have not been moved to Zakarpattia and ordering that those who refused to go “be packed and taken away”.  Roma and human rights groups have demanded action from the enforcement bodies and it was reported in the evening of 22 April that a criminal investigation has been initiated.

The video from Martsinkiv’s weekly meeting on 21 April is truly shocking.  Martsinkiv initially uses the term “Gypsies” then changes it to “Roma”, saying “We’ve already provided a coach. Took them to Zakarpattia.  Why are they still here?”  He was told by the head of the ‘emergencies department’, Ihor Vlizlo, that 12 people had refused to go.

“What do you mean, refused?”, Martsinkiv asked, and continued, “Why didn’t you pack them off?  There are the police.  By next Tuesday you should resolve this problem.  We gave you a coach.  The police asked to be given a coach, and we gave it.  Why didn’t you pack them and take them away?”  He was told that ten Roma had been “handed over to the Zakarpattia police’ on the border of the oblasts, and reiterated that they “have to make a second round”.

The Coalition of Ukrainian Roma NGOs reacted swiftly, pointing out that Martsinkiv’s words had contained hate speech and could incite enmity to Roma.  The police behaviour was in breach of Article 7 of the Law on the National Police which expressly prohibits any privileges or restrictions on the grounds of race, ethnicity, etc. Both the Mayor and all those who took part in such measures were in breach of Article 33 of Ukraine’s Constitution which guarantees freedom of movement and of place of residence.

The NGOs call upon the Office of the President, the Verkhovna Rada and Cabinet of Ministers to comment on the actions of the Mayor of Ivano-Frankivsk and to carry out immediate action on preventing anti-Roma attitudes and behaviour in all parts of Ukraine.

The Ukrainian Helsinki Human Rights Union and Kharkiv Human Rights Group also issued a statement, reminding (or informing?) the Mayor of Ivano-Frankivsk that any forced movement of a person is a deprivation of their liberty and can only be carried out on legal grounds, and by court order.   Such forced transfer is otherwise a criminal offence, punishable, in accordance with Article 146 of Ukraine’s Criminal Code by up to five years’ imprisonment.

The authors ask why nobody spoke out during the meeting, telling Martsinkiv that his words were anti-Roma and that there were grounds for believing that he had committed a criminal offence under Article 161 of the Criminal Code, which punishes for acts of prejudice and discrimination.  UHHRU and KHPG offer their legal assistance to any Roman whose rights have been violated as a result of such unlawful utterances and actions.

It is good that there has been a reaction, however it remains to be seen whether this is more than merely an announcement, and whether an investigation is carried out into the apparent involvement of police officers in this criminal behaviour.

It took until May 2019 for a court of appeal in Odesa to find that the police failure to react adequately during anti-Roma riots in Loshchynivka (Odesa oblast) in August 2016 had been unlawful and to award compensation to the Roma families driven from their homes.  There would have been no success at all had it not been for two committed lawyers, Volodymyr Kondur and Yulia Lisova.  Over three years after the riots which began after the arrest of a young Roma man on suspicion of raping and murdering a child, there are very strong grounds for suspecting that Mykhailo Chebotar did not commit the crime, and that the enforcement bodies did not carry out a proper investigation (details here).