In Russia level of support for murderous dictator Stalin reaches record highDetained in Putin’s Russia for shouting that Stalin should burn in hellTelling the truth about Stalin and the Great Terror gets historians arrested in RussiaRussia arrests second historian of Stalin’s TerrorRussia turns to politically-motivated excavations to rewrite history of Soviet Terror after jailing one of its main historiansRussia brings new fabricated charges against historian of the Terror Yuri DmitrievRussia reinstates political trial of historian of the Terror Yuri DmitrievRussian Historian of the Terror Yuri Dmitriev acquitted of main chargesRussian historian faces 9-year sentence for exposing the victims and perpetrators of Stalin’s TerrorSerbsky Institute dismisses insane charges in Russia’s trial of historian of the Terror Yury DmitrievRussia turns to punitive psychiatry as its trial of jailed historian of the Terror collapsesRussian Deputy Defence Minister: ’Why should we be ashamed of Stalin?’It"s back to the USSR as Russia tries to destroy Ukrainian identity on occupied territory 69-year-old Kharkiv region blogger tortured with electric shocks for answering his Russian captors in Ukrainian Russia persecutes Crimean Tatars, destroys their heritage because they expose the lies about its annexation of Crimea Moscow tries to justify its war crimes in Ukraine by glorifying its soldiers as ‘heroes of Russia’ Russian FSB officer charged over unlawful detention and torture of Ukrainian journalist Vladyslav Yesypenko Ukrainian kids from occupied Melitopol indoctrinated and enlisted in Russia’s ‘Youth Army’ EU countries turn back Crimean Tatars fleeing forced mobilization to fight Russia"s war against UkraineDead souls and infants ‘voted’ in Russia’s sham ‘referendums’ on annexing Ukrainian territory
• Topics / News from the CIS countries
• Topics / Human Rights Abuses in Russian-occupied Crimea 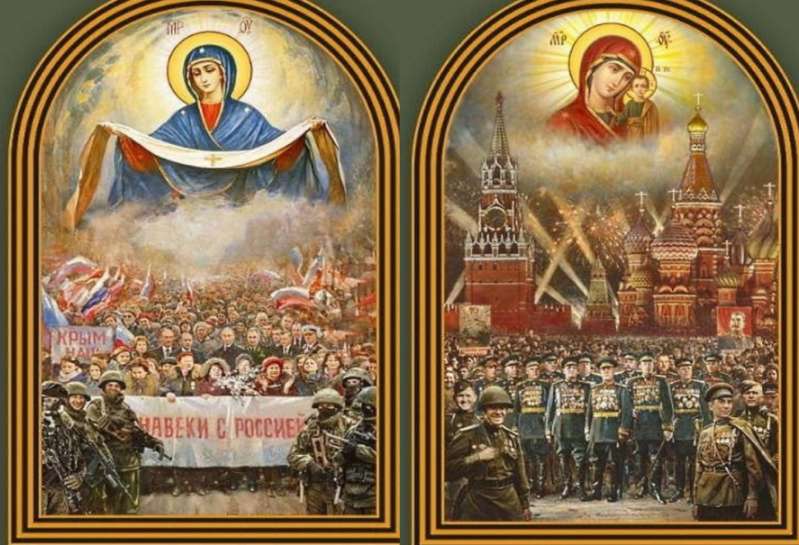 Russia’s annexation of Crimea is to form part of the mosaics inside the new Defence Ministry cathedral, together with portraits of mass murderer Joseph Stalin and Russia’s soon-to-be President-for-life, Vladimir Putin.  Bishop Stefan, Head of the Church of the Russian Armed Forces in Kubinka (Moscow region) has claimed that such “pictures of historical events and figures” are simply traditional.

It is possible that invasions and land-grabs were depicted on mosaics In previous centuries, however Russia’s annexation of Crimea was the first in Europe since Adolf Hitler’s seizure of Austria in 1938.  It has not been recognized by any democratic state, and there can be no justification for glorifying Russia’s aggression against Ukraine and violation of international law on the walls of a place purportedly of worship.  That this is not merely about tradition is clear from the fact that the mosaics show politicians and soldiers, but not the Patriarch or head of the Russian Orthodox Church.

The ‘artist’, Vasily Nesterenko, has based at least the Crimean part of his work entirely on Kremlin propaganda, with the ‘composition’ entitled ‘The bloodless reunification of Crimea’.  While Ukraine was not, able to fight the Russian Federation, the latter’s seizure of control was certainly not ‘bloodless’ and was, unequivocally an invasion.  The image does not, of course, include the armed paramilitaries who abducted, tortured and in some cases murdered pro-Ukrainian activists.  In another part of the work, the Russian slogan ‘Crimea is ours’ is seen, surrounded exclusively by women.

Putin is in a prominent place on the work, as too is Minister of Defence, Sergei Shoigu. The only recognizable Crimean is Sergei Aksyonov, the obscure pro-Russian politician with a criminal past whom Russian soldiers installed in power at gunpoint on 27 February 2014.  As well as some other prominent politicians, this mosaic on a church wall includes the Head of Russia’s FSB [security service], Alexander Bortnikov.  Nesterenko chose to show the director, and not the FSB officers who have spent the last six years persecuting Crimean Tatars and other Ukrainians in occupied Crimea for their faith, political views or civic activism.

Some of those depicted on the mosaics, such as Shoigu, actually donated money for the construction of the church, however the Kremlin has claimed to have known nothing about Putin’s image appearing.

Construction of the church began late in 2018, with completion planned for the grandiose events that the Kremlin had been planning around the 75th anniversary of Victory Day on 9 May 2020.  This main church of the Russian Armed Forces is dedicated to what Russia under Putin is again referring to as the Great Patriotic War (1941 – 1945).  Nesterenko boasts that there is not a single military event in Russia’s history that has not been depicted on the mosaics.  Most shocking is undoubtedly the portrait of Stalin on an image depicting the victory parade in 1945.   Nesterenko claims that the thought behind this was “that this is a significant figure at the time of the Great Patriotic War and a historical assessment of him will be given by other generations, not ours.  Or maybe ours, but somewhat later”.

Here too, Nesterenko is closely following the line taken by the Kremlin.  While officially, Stalin’s crimes are acknowledged, they are increasingly underplayed, while those who have devoted their lives to uncovering the truth about such crimes, like historian and political prisoner Yuri Dmitriev, are themselves facing persecution. There has been a pronounced turn under Putin towards concentrating on the Soviet victory in WWII and towards a largely inaccurate narrative in which Stalin is credited with this victory.  Despite Nesterenko’s claim, there had been a largely accurate assessment of Stalin and the monstrous crimes he was responsible for during the first decade after the collapse of the Soviet Union.  This began changing under Putin and has resulted in a terrifying percentage of Russians viewing Stalin in a positive light, and 46% of the population willing to justify the number of victims of the Stalin era.

Among the millions of Stalin’s victims were very many members of the Orthodox Church, as well as of the Ukrainian Greek-Catholics and other faiths.  Stalin and his portrait were doubtless present at the Victory Parade in 1945, but that hardly makes his image on the walls of a place of worship appropriate.

A significant number of members of the Russian Orthodox Church’s hierarchy, at least after Stalin, are believed to have worked closely with the KGB   Under Putin, a former KGB officer, the links between the state and the Moscow Patriarchate have again become very strong.  This was particularly seen with Russia’s annexation of Crimea and aggression in eastern Ukraine.

Patriarch Kirill has consistently endorsed the concept of a supposed ‘Russian World’ – encompassing Ukraine, Belarus and Moldova, as well as Russia itself.  In November 2009, for example, Kirill stated that “if we consider the Russian Federation with its present boundaries, then we have sinned against the historical truth and artificially cut off millions of people who are aware of their role in the fate of the Russian World and consider its creation their main deed.”

While the official positive of the Orthodox Church under the Moscow Patriarchate in Ukraine was that it took no position on the conflict in Donbas. This was very often not the impression on the ground, with members of the Church seen blessing prominent militants such as former Russian military intelligence officer Igor Girkin who is wanted in Ukraine for war crimes and is currently being tried in absentia in the Netherlands for his believed role in the downing by a Russian Buk missile of Malaysian airliner MH17.

Update and more information here:  Russian Deputy Defence Minister: “Why should we be ashamed of Stalin?”