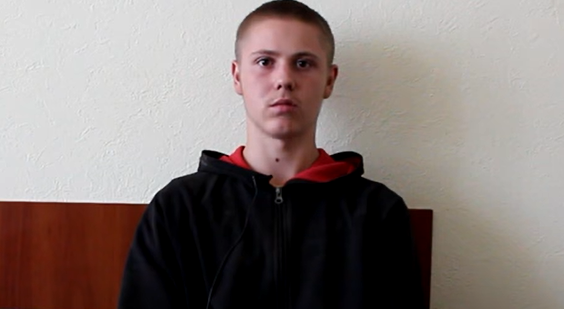 21-year-old Bohdan Kovalchuk has been imprisoned in the so-called ‘Donetsk people’s republic’ [DPR] since he and several other teenagers were seized by the militants in September 2016 and forced to give videoed ‘confessions’ of having carried out tasks for Ukraine’s SBU [Security Service].  Bohdan was just 17 at the time, with the youngest lads – 15.

Initial DPR reports spoke of seven teenagers: Kovalchuk;  Arsen Belavin; Denis Khmelenko; Denis Koval; Vladislav Lazushko; Yaroslav Myronov and Maxim Solodovnikov.  Belyavin and Koval appear to have been safely in government-controlled Ukraine by that time, however the others were eventually ‘sentenced’ by courts which no democratic country has recognized to terms from 10 to 15 years’ imprisonment.

At the time of the last major exchange of prisoners in December 2019, the militants offered to ‘pardon’ the young men, but only on condition that they ‘repented’ and agreed not to leave occupied Donbas.  The lads had spent over three years imprisoned and most of them agreed.  Kovalchuk, however, refused, saying that he wanted to go to government-controlled Ukraine.  The militants are clearly punishing him for this, since he was not included in the last, April, exchange, and is spending a fourth year deprived of his freedom, with his 10-year ‘sentence’ still standing.

For over three years the young men’s relatives consistently rejected any contact with the media, however after Kovalchuk was not released on 16 April, his grandmother, Tetyana Petrivna agreed to speak with Radio Svoboda.  She explained that Bohdan is her daughter’s only son, and her only grandson, whom they were bringing up together.

She is clearly not surprised that Bohdan refused to agree to the militants’ conditions for being ‘pardoned’ and released  He has always had strong principles. She remembers how he told her: “Grandma, understand: once you’ve been a traitor once, you’ll do it again”.

Back in 2016, he was planning to leave Yasynuvata for government-controlled Ukraine, where he was hoping to train as a car mechanic. He had gathered all the documents, but was suddenly told that he had to get a medical certificate in Yasynuvata.  He went off to get it and was due to return on 31 August.  She began ringing, without any success and when, in a panic, she spoke to his friend, the person said that he had also been trying to get through without any success.  Some time elapsed before her daughter learned that Bohdan had been ‘arrested’. Only his mother has been allowed to visit him occasionally over the last three and a half years.

Since the first report of the ‘arrests’ was on 12 September 2016, it seems likely that at least Kovalcuk, but probably all five lads, had been illegally held prisoner, without an adult guardian present,  for up to 12 days.  We know from released hostages how ‘confessions’ are normally tortured out of prisoners, and can only guess what methods were used for the video ‘confessions’ presented by the militants and widely shown on Russian state-controlled channels.  While the reports inaccurately said that Kovalchuk was 18, it was clear even by looking at some of the lads how very young they were.  In fact, Russian propaganda media even referred to them as “children saboteurs”.

The DPR news agency reported on 12 September 2016 that the SBU had recruited teenagers to carry out acts of sabotage and that “a network had been uncovered”.  It was originally suggested that seven young lads had been arrested, but it soon became clear that they were holding five underage lads in custody.   The Russian proxy Donbas ‘republics’ have followed the Russian FSB’s lead in producing ‘confessions’ on video, but none were as chilling as these because of the lads’ age.  It is clear from the video with Bohdan that he was reading a script, and whether any part of the boys’ story was true will only become clear when Kovalchuk is finally released.  It is, however, telling that the militants forced the other lads to refuse to leave occupied Donbas before releasing them.

The militants claimed that they had blown up a number of cars, civilian and military targets on the orders of the SBU, and specifically an SBU officer named Ihor Ritsko [nom de guerre Almaz] ‘.  According to the militant version, Almaz had first recruited Kovalchuk who then involved the other lads.  They had all purportedly been initially enticed by money, then blackmailed and threatened with punishment for crimes already committed.

Two days after the initial reports, Russia’s Investigative Committee became involved.  Instead of condemning the shocking images of children forced into providing ‘confessions’ without parents or others present, the Investigative Committee announced that it had initiated a criminal investigation “against SBU officer Ihor Rytsko and other unidentified individuals in relation to evidence of the crime set out in Article 356 § 1 Russian Federation criminal code (the use of prohibited means and methods of war).”  The text then went on to repeat all of the militants’ claims about the young lads.

When and how the teenagers were ‘tried’, and whether lawyers were involved in ‘courts’ where the lads received huge prison sentences is unclear.  International bodies and diplomatic missions regularly raised the subject of the teenagers, but were fobbed off or ignored for over three years.  In the case of Bohdan Kovalchuk, they are still being ignored.