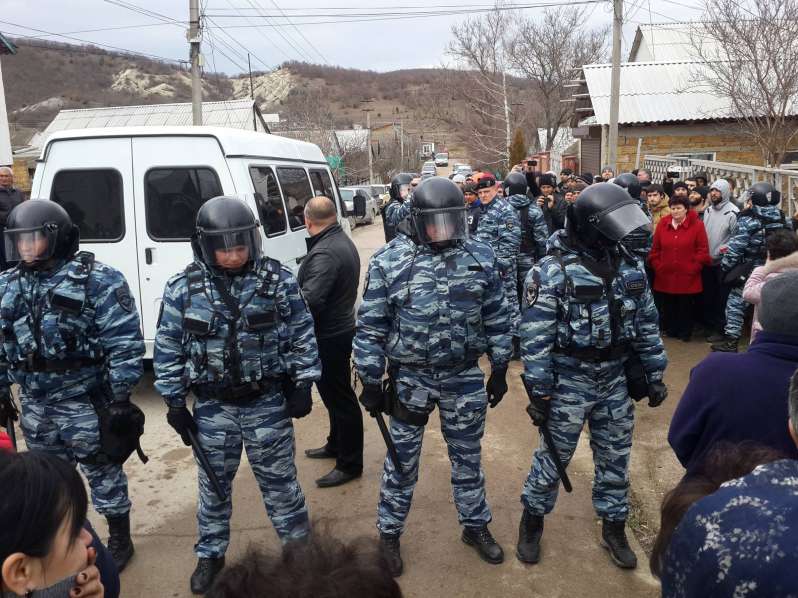 This year alone, three Crimean Imams have faced prosecution for praying in their own mosques, with Russia claiming this to be ‘unlawful missionary activity’.  Serhiy Filatov, a Jehovah’s Witness from Dzhankoy is imprisoned, awaiting his appeal against a six-year prison sentence for having worshipped with others in his own home.  Although Filatov and 55 Crimean Tatar and other Ukrainian Muslims are formally imprisoned for supposed ‘extremism’ or ‘terrorism’, the ‘evidence’ presented in all cases pertains to how the men worship, and their religious views.

Virtually all faiths came under attack within the first months of Russia’s occupation of Crimea, and many religious communities were essentially driven out through illegal requirements on registration under Russian legislation.  Initially only the Russian Orthodox Church was exempt, though the Muftiate, or Spiritual Directorate of Muslims of Crimea, which chose to collaborate with the Russian occupation regime, also seems to be in favoured position. There is, unfortunately, evidence that the Mufti, Emirali Ablaev, has helped Russia’s FSB to persecute those Crimean Muslims who in terms of worship and religious beliefs are regarded as ‘dissident’.

Dangerously broad and blurred legislation on so-called ‘missionary activity’ was introduced in Russia in 2016 as part of the notorious Yarovaya package.  While its primary aim in Russia may have been the Protestant faiths that the Russian Orthodox Church perceived as a threat, in occupied Crimea, the legislation has also been actively applied against Muslims.

As reported, on 2 March Yelena Klepova, from the ‘magistrate’s court’ in occupied Simferopol found Rasim Dervishev, the Imam of a Simferopol mosque, guilty of ‘unlawful missionary activities’ during Friday prayers in his mosque and imposed a five thousand rouble fine.

Dervishev’s lawyer, Aider Azamatov, explained to Krym.Realii how the Russian prosecutor tried to justify the charge (under article 5.26 part 4 of  Russia’s code of administrative offences) against his client.  According to the documents, the building where they were worshipping, was a residential building, not registered as a mosque.  This, however, even by Russian law, is not illegal, as long as there is “no intent to carry out missionary activities”.  A person, who was clearly from the FSB, had turned up for a few minutes, and took a five-second video in which Dervishev can be seen turned to some worshippers.  Azamatov assumes that they thought that Dervishev would be intimidated and admit to the charges.  He did not, and the seven hearings exposed the lack of any grounds for the prosecution.

The case should have been thrown out as it is impossible to talk of ‘missionary activity’ when those present were Dervishev’s ordinary worshippers.  Instead, three ‘experts’ were called upon to determine whether such ‘missionary activity’ had taken place.  Of these, two -  Aider Bulatov and Emir-Asan Umerov, who both have specialist knowledge of Islam,  found nothing ‘missionary-like’ about Dervishev’s holding of Friday prayers.

One person alone – Olga Griva, head of the department of religious studies at the Russian-controlled Vernadsky University, found the missionary activities claimed by the FSB.  She, in fact, called everything ‘missionary activity’, as Azamatov notes. “In response to our questions as to how, in a five-second video and photographs, she had discovered signs of an infringement, she answered that the person on the video, who looked like Rasim Dervishev, was facing people, he was looking at them and the Koran was before him.  That, in her opinion, constituted signs of missionary activities. She also said that if, during the Ramadan Fast, a person of another faith sits at the same table as a Muslim and eats, that can also be viewed as missionary activities. “

Azamatov believes that Dervishev’s prosecution is linked with the fact that he does not wish to be a member of the [‘official’] Spiritual Directorate of Muslims of Crimea. He has reportedly refused on several occasions to register his community under the wing of the Directorate.  Azamatov assumes that the latter saw Dervishev as a competitor and therefore initiated the prosecution.

Prominent lawyer, Emil Kurbedinov, who was also involved in Dervishev’s defence, believes that the Russian state is trying to establish a monopoly on Islam in Crimea. He points out that Russian law clearly states that missionary activity is trying to draw people of other faiths into yours.  That has nothing to do with Muslims gathering for Friday prayers, as in Dervishev’s case.  This is evident religious persecution, Kurbedinov says, and believes that people are being persecuted for refusing to collaborate with the state and join those organizations that the state considers correct.

He assumes that the additional charge laid against Dervishev, of infringing established procedure for holding meetings, protests and demonstrations, with this carrying a possible 15-day term of imprisonment, in in revenge for him having taken on lawyers.

At the beginning of April Imam Yusuf Ashirov was charged under this same woolly legislation, and then on 15 April Imam, Dilyaver Khalilov was summoned to give ‘an explanation’ on the same charge of unlawful missionary activities.  The latter two cases are ongoing.

The above prosecutions are illegal, but at least do not involve huge prison sentences.  Russia is currently imprisoning 55 Ukrainian Muslims on fabricated charges of ‘involvement in Hizb ut-Tahrir’, a peaceful pan-Islamist party which is legal in Ukraine. Russia is the only country in the world to have labelled Hizb ut-Tahrir ‘terrorist’, and it is now using terrorism charges based solely on unproven involvement in Hizb ut-Tahrir against Crimean Tatar civic journalists and activists, especially from the Crimean Solidarity civic initiative.

Statistics for 2019 are not yet available, however in 2018 there were a minimum of 30 administrative prosecutions in occupied Crimea under the same Article 5.26 of Russia’s Code of administrative offences (so-called ‘infringements of legislation on freedom of conscience, worship and religious organizations’.  The prosecutions were for singing, praying or preaching in public places or in premises not designated as places of worship.  In Feodosia, a fine was imposed for having read out prayers in a rented hall of a hotel, while in Sevastopol there was a fine for religious song near a public transport stop.

While some of those administrative prosecutions were of Jehovah’s Witnesses, Russia has also brought far worse repression to occupied Crimea.  Following its extraordinary ban on a world faith on 20 April 2017, Russia began bringing criminal charges and in many cases imprisoning believers, first in Russia, but now also in Crimea.

On 5 March 2020, Serhiy Filatov became the first Ukrainian Jehovah’s Witness to be imprisoned for practising his faith under Russian occupation.  ‘Judge’ Maria Yermakova from the Russian-controlled Dzhankoy District Court, sentenced the 48-year-old father of four to 6 years in a medium security prison He was found to have prayed, together with others, in his own home, which the Russian-controlled prosecutor and court chose to view as “undermining constitutional order and state security”.  He is currently held in the appallingly overcrowded and unsanitary Simferopol SIZO [remand prison], awaiting the appeal hearing.

While real terms of imprisonment in the case of Jehovah’s Witnesses are not as inevitable as those against Crimean Tatar Muslims, in both cases Russia’s repressive machine has been set in action, and more victims are inevitable while Crimea remains under Russian occupation.