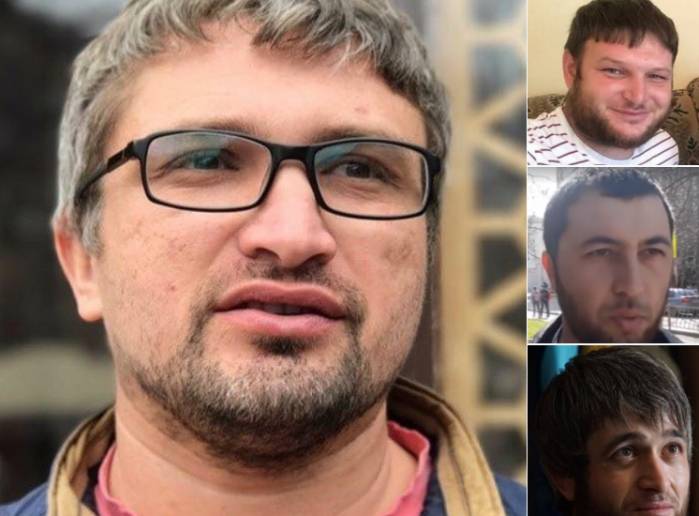 On the eve of the first World Press Freedom Day since journalists Roman Sushchenko and Stanislav Aseyv were freed from Russian or Russian-controlled militant captivity, the two men have issued a crucial appeal for solidarity.  In their letter to the International and the European Federations of Journalists [IFJ / EFJ], they ask that the same efforts once made on their behalf now be focused on helping Russian-imprisoned Crimean Tatar civic journalists.

Aseyev and Sushchenko express their gratitude for the statements issued by IFJ / EFJ which helped spread the word about persecution of Ukrainian journalists by Russia and the Russian proxy Donbas ‘republics’.  “The same strong international support” is now urgently needed by their Crimean colleagues.  Russia’s persecution of the men, all Crimean Tatar civic journalists, is in grave violation of freedom of expression and people’s right to objective information.  It is vital that we all work to ensure the men’s release.

The authors mention five political prisoners, although there are currently ten civic journalists imprisoned on politically-motivated charges.  All of them are involved in the Crimean Solidarity civic initiative which arose to both help political prisoners and their families, and to inform about armed searches, arrests and politically motivated prosecutions. Not one of the men is openly persecuted for his work in journalism, but then, neither were Sushchenko and Aseyev.  All have rightly been recognized by the Memorial Human Rights Centre as political prisoners, and their release has been demanded in numerous resolutions from the UN General Assembly and other international bodies.

The first serious offensive against Crimean Solidarity was on 11 October 2017, with the arrest of six men, including civic journalists and activists Ernes Ametov; Marlen (Suleyman) Asanov; Timur Ibragimov and Seiran Saliyev. In 2018, Nariman Memedeminov and one of the coordinators of Crimean Solidarity, Server Mustafayev were also arrested.  None of this, nor other acts of overt intimidation, silenced Crimean Solidarity, and on 27 March 2019 and shortly afterwards, 25 activists, including civic journalists Osman Arifmemetov; Remzi Bekirov; Rustem Sheikhaliev and Ruslan Suleymanov were arrested and almost immediately taken to Russia.

All of the above had played a vital role in providing information about the persecution and other rights violations in occupied Crimea.

In all cases, Russia has used gravely flawed ‘terrorism’ legislation based solely on unproven allegations of involvement in Hizb ut-Tahrir, a peaceful pan-Islamist organization which is legal in Ukraine and which is not known to have committed any acts of terrorism anywhere. No other country but Russia has called Hizb ut-Tahrir ‘terrorist’ and it has never provided a good reason for what is believed to have been a political decision taken in 2003 to make it possible to send Muslims back to Uzbekistan where they faced religious persecution.

The 36-year-old father of three was one of the first people to tirelessly attend court hearings in political trials, often streaming material onto the Internet.  During his ‘trial’, the FSB essentially admitted that Memedeminov had come to their attention when he began visiting detention hearings in the case of four political prisoners arrested in 2015.

His case stands out because the charges pertained to three innocuous video clips, two of which were posted before Russia’s invasion and annexation of Crimea.  The FSB claimed that these contained ‘public calls to carry out terrorist activities, public justification of terrorism or propaganda of terrorism via the Internet’ (Article 205.2 § 2 of Russia’s criminal code).

In the video posted on 7 June 2013, Memedeminov pointed to a Hizb ut-Tahrir gathering behind him, explaining the essentially theological aspects of Muslim faith that would be discussed.   There was no terrorism and Memedeminov was simply reporting a perfectly legal meeting taking place on Ukrainian territory.

The second video, from 10 October 2013, reported that people planning to take part in a  Hizb ut-Tahrir meeting were not allowed into the Ukrainian Theatre in Simferopol,   There were no calls to anything in the video, let alone to violence or ‘terrorism’.

This did not happen, nor did the prosecution do more than come up with some absurd ‘expert assessments’ of the videos, arguments which Memedeminov and his lawyers demolished during the hearings.

That did not prevent the same Russian ‘military court’ in Rostov, involved in numerous politically-motivated trials of Ukrainians, from sentencing him, on 2 October 2019, to two and a half years’ imprisonment.

All of the other eight men are facing 10-20 year sentences for alleged involvement in a peaceful organization because Russia’s Supreme Court ruled it, without any grounds, and in secret, to be ‘terrorist’.  Not one of the men is accused of any recognizable crime and in almost all the cases, the men had faced persistent harassment, fines and even short periods of imprisonment on administrative charges without any mention of Hizb ut-Tahrir or ‘terrorism’.

The earlier harassment was clearly a threat, and when the men refused to be intimidated into silence, they were arrested.

As mentioned, the first time this was openly directed against Crimean Solidarity activists and journalists was with the arrest of eight men in October 2017 and May 2018, including Ernes Ametov; Marlen Asanov; Seiran Saliyev; Timur Ibragimov and Crimean Solidarity coordinator and Amnesty International prisoner of conscience Server Mustafayev.

Their ‘trial’ is currently underway in the same notorious court in Rostov.  The FSB have designated Asanov and Ibragimov as ‘organizers’ of a Hizb ut-Tahrir group, which carries a sentence of 20 years or even life imprisonment.  The other men are charged with ‘involvement in such an alleged ‘group’ (Article 205.5 § 2, with the sentences from 10-20 years). In February 2019, all the men were also charged (under Article 278) with ‘planning to violently seize power’.  There is never any attempt to explain how eight totally unarmed men were supposed to have planned to do this, and Russia’s FSB appears to be adding this charge against Crimean Tatars as revenge for their solidarity in refusing to give false testimony against themselves or others.

Remzi Bekirov is a historian and tour guide by profession, but responded to mounting persecution under Russian occupation by becoming one of the first Crimean Solidarity civic journalists. It was he who streamed information about the detention in early March of Archbishop Klyment and who helped make sure that the mounting repression against Crimean Tatars did not go unnoticed.  Shortly before his arrest, he had become an accredited correspondent for the independent Russian Internet publication Grani.ru.

Osman Arifmemetov  is a maths and information science teacher and programmer by profession, who felt compelled by the mounting repression to become one of the  main civic journalists reporting on searches, arrests and court hearings for the Crimean Solidarity civic initiative.  35-year-old Arifmemetov had only known of the suffering the Crimean Tatar people endured during Stalin’s 1944 Deportation from the stories of his grandparents.  The first months of his imprisonment brought many bitter echoes of those accounts which he has described in a poignant text from prison entitled ‘My Deportation’.

It was for this text that Arifmemetov became one of two political prisoners, together with Server Mustafayev, to be declared laureates of the literary award «Крымский инжир» [‘Crimean Fig’],.

Russia’s ‘Hizb ut-Tahrir’ cases have been described as a conveyor belt of repression for which the FSB receive promotion or other benefits and where ‘judges’ provide the sentences demanded of them.

Russia began crushing all independent media within months of annexation and is openly demonstrating that it will use any methods to silence those who refuse to be intimidated.  Without major publicity and pressure from journalist unions, NGOs, and each of us, there will be more and more such arrests and horrific sentences.