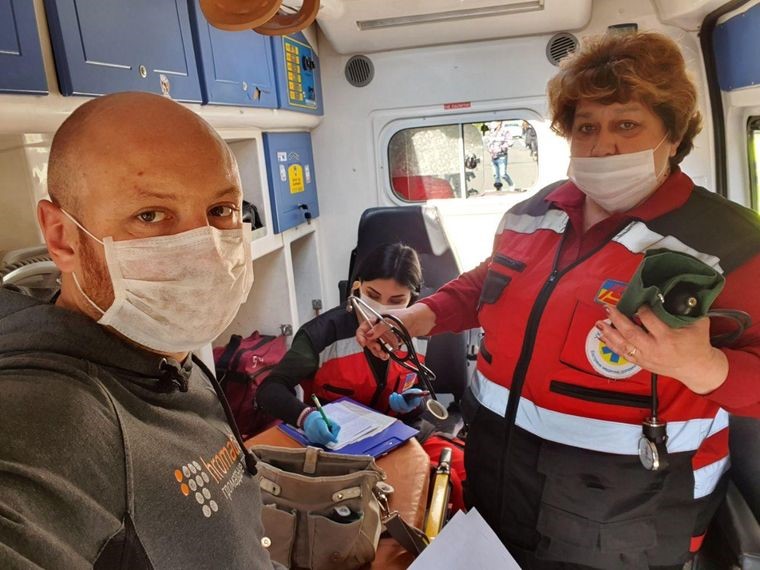 Media groups have demanded a proper investigation and response from Ukraine’s leaders after the attack by police officers on Bohdan Kutiepov from Hromadske TV while he was doing his job.

In the morning of 29 April, Kutiepov and his colleague Nikita Mekenzin were providing life coverage of a demonstration outside the Cabinet of Ministers buildings, at which small business owners were protesting against the restrictions imposed in connection with the coronavirus pandemic.

He was standing on a grass slope in Marinsky Park near the protest when several police patrol officers walked up to him and told him to leave this green zone. He refused, explaining that he was there carrying out his work and that this was the best spot to be able to see the entire protest.  The police, apparently, reacted by calling him “a clown” and repeating their demand that the journalists leave.  He was then told that if they didn’t take their equipment away, the police would break it.   As he continued filming, they grabbed the journalists and dragged them away, with all of this broadcast live, and visible on the video here.  It seems that the police got angry when Kutiepov openly continued filming and broke his stabilizer.

There has been response with an internal police investigation first announced, and an officer suspended pending its conclusions.  Later in the day, the State Bureau of Investigations announced that they had initiated an investigation under Article 365 of the Criminal Code (exceeding powers with the use of force).  No mention is made of Article 171, although the officers were evidently obstructing journalists carrying out their work.

In a joint statement on 29 April, media and human rights groups and activists condemned the incident as the latest attack on journalists carrying out their professional duties. They note the announcement that an internal investigation has been started, but point out that this should not be with respect to one person when the video makes it quite clear that more than one person was involved.

Over the last three months, there have been at least 15 attacks on journalists, with these in some cases carried out by people who are called on to protect life and safety. Free media and pluralism are vital for a democratic society, they stress, and this cannot be achieved if the authorities do not react adequately to all such cases of violence and if the assailants are not punished.

The fact that a criminal investigation has been initiated is certainly no reason to relax and await developments.  In 2017,  police officers assaulted another Hromadske journalist, Dmytro Replyanchuk.  There has been no movement in that supposed ‘investigation’, and the authors of the appeal demand that a report be given on “the honest and independent investigation into this police attack”, and reaction from both President Volodymyr Zelensky, and the Interior Minister, Arsen Avakov.

The Institute for Mass Information, one of the signatories to the appeal, reported on 21 April that it had recorded 18 violations of freedom of speech in Ukraine since 12 March, linked with the current pandemic restrictions.  These included at least two cases where force was using to obstruct journalists trying to do their work.