Ukrainian investigative journalist Vadim Komarov dies after brutal attack. Killers remain unidentifiedUkrainian investigative journalist in critical condition after savage attackNobody believes Ukrainian environmental activist’s death was suicide, so why was the investigation terminated?55 unsolved attacks on Ukrainian civic activists. Prosecutor General says it’s their faultShooting of Odesa civic activist prompts warnings of danger to Ukraine’s national securityPolice suspected of protecting culprits behind the attempted murder of civic activist Kateryna HandziukInvestigation sabotaged into savage acid attack on civic activist who exposed police corruptionPolice suspected of involvement in horrific acid attack on Ukrainian civic activist Kateryna HandziukSavage attack on Kherson civic activist known for scathing criticism of police corruptionIzium Mass Graves: Tortured victims with bound hands and entire families killed by the Russian invaders Fascism is here in Russia. Anti-war activities in Russia, 15-22 AugustAbducted Kherson woman likely imprisoned and tortured by Russian FSB“I Gave the Dogs Vodka to Keep Their Hearts Going” (Mariupol Resident)Russia produces a variation of easily disproven lies about its horrific war crime in Kremenchuk Ukrainian "refugees" in Russia forced to give "testimony" blaming Ukraine for Russian war crimes Summary of the events that occurred in Kherson city and Kherson oblast during the 90 days of the full-scale Russian-Ukrainian war (February 24 – May 24 2022)Russia extends terror and abductions from occupied Crimea and Donbas to all of Ukraine ‘Mariupol Moses’: A Man Who Took 117 People Out Of The Besieged City On Foot22 journalists killed since Russia began its total war against Ukraine62-year-old Chernihiv village head abducted by FSB to Russia and tortured
• Topics / The right to life
• Topics / Freedom of expression 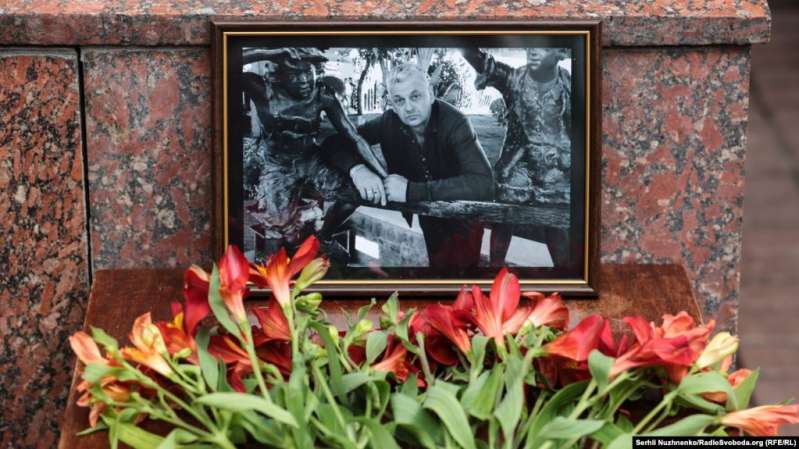 A year has passed since the fatal attack on Vadim Komarov, with no progress made in finding the killer of a Cherkasy journalist known for hard-hitting investigative reports about local corruption, embezzlement of public funding, organized crime, etc.  Komarov was one of two journalists killed in Europe in 2019.  In February this year, a man was arrested and charged with the murder of 29-year-old Lyra McKee, shot dead while covering riots in Londonderry on 18 April 2019.

Komarov was attacked at around 9 a.m. on 4 May in the centre of Cherkasy.  The attack was savage, with three blows to the head, probably inflicted by a hammer or similar.  Neither his mobile phone nor his wallet were taken.   He was in a coma for the next six weeks, but died of his injuries on 20 June 2019.

Valery Makeyev, the secretary of Ukraine’s National Union of Journalists and seemingly a friend of Komarov’s, reported shortly after the attack that Komarov had been expecting to receive some “shocking information” on 4 May.  Makeyev believed that this was from sources within the law enforcement bodies about how a high-ranking official in the City Council had committed certain illegal actions and was allegedly trying to escape justice by pretending to be psychologically disturbed.  Serhiy Tomilenko, head of the National Union of Journalists and various journalist colleagues all note that Komarov touched on subjects that others wanted to see concealed.

Komarov had already faced one serious attack, after a person tried to shoot him in September 2016.  Komarov then explained that somebody had knocked at his window.  He assumed it was a person coming to read the gas or electricity meters and went outside.  He had, however, only poked his head around the side of the gate and was able to slip back inside when he saw a man aiming a gun at him.  The shot him the brick fence instead and the assailant fled.

Following the attack on 4 May 2019, the police initially began an investigation under Article 121 § 1 of Ukraine’s Criminal Code (deliberately causing grave bodily injuries), with this later changed to Article 115  - first attempted murder, and then murder.

Following his death, Makeyev wrote that he had addressed some hard-hitting questions to the police two weeks earlier “regarding absolutely obvious things linked with the Vadim Komarov investigation which in my opinion are strangely eluding the attention of the investigators”.

The police made a lot of noise immediately after Komarov’s death about intensifying the search for his killer.  According to Makeyev, they did even provide reports of their activities for a while, however these have stopped.  The police also issued an identikit picture as well as some CCTV footage, although it is worrying that they only did so on the day that Komarov died, and not earlier.  According to NUJ, despite the promises from the police, there have been no reports since then.

Procherk, a local newspaper which reported the attack from the outset, was left with nothing new to add except some statistics and other largely meaningless words from the Cherkasy Police, issued for the anniversary.

There is clearly no progress and, as Makeyev has noted from the beginning and now reiterates, the investigation seems much too secretive.  There can be reasons for not revealing developments where this could alert the perpetrator, however even then he believes that there need to be interim reports, which are not being provided.

In fact, there is nothing to suggest that any progress has been made, which is chilling given that all those who knew Vadim Komarov are convinced that he was killed because of his work as a journalist.