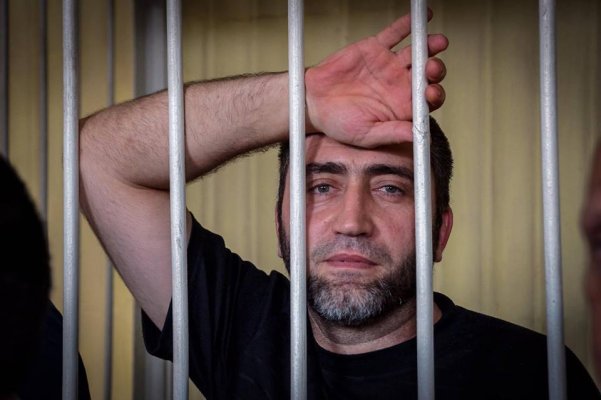 Enver Mamutov once told a Russian-controlled ‘court’ in Crimea that if he had drunk alcohol or taken drugs, he would not be imprisoned. Insane as it may sound, there is some truth to this as the recognized Crimean Tatar political prisoner was arrested and later sentenced to 17 years for his religious faith only.

12 May 2020 marks the fourth anniversary of the arrests of Mamutov and three other entirely law-abiding Crimean Tatars from Bakhchysarai: Rustem Abiltarov; Zevri Abseitov and Remzi Memetov .  Although not one of the men was accused of having committed or even planned to commit an actual crime, the FSB organized a huge ‘operation’ that day, blocking roads and bursting into the men’s homes and terrifying their children.

The men were all respected members of the community and a huge number of people came out in support.  The masked men taking 49-year-old Remzi Memetov away were asked by one elderly woman what right they had.

Russia does indeed have no right. As an occupying state, it is in violation of international law for its prosecution and imprisonment of men like Mamutov under Russian legislation.  There is particular cynicism in the fact that Russia is persecuting men for unproven ‘involvement’ in the peaceful Hizb ut-Tahrir party which is legal in Ukraine.  The Russian Supreme Court has never given any adequate explanation for its 2003 decision to make Russia the only country in the world to have declared Hizb ut-Tahrir ‘terrorist’.   The ruling was effectively passed in secret, and the renowned Russian Memorial Human Rights Centre believes that the real motive may have been to facilitate extradition of members of Hizb ut-Tahrir to Uzbekistan where they faced religious persecution.

Since early 2015, Russia has been using such charges in occupied Crimea, with these prosecutions increasingly used as a weapon against Crimean Tatar civic journalists and activists.

The Russian FSB have a set format for these cases, with at least one person, here, Mamutov, designated the ‘organizer’ of a Hizb ut-Tahrir group under Article 205.5 § 1 of Russia’s criminal code, with this carrying a sentence of up to life imprisonment.  The others were charged with ‘involvement’ in this alleged, and never proven, ‘cell’, under Article 205.5 § 2.

Several months after their arrest, all four men, living in their native Crimea, were charged by an occupying state, with ‘having planned to violently seize power’, under Article 278 of Russia’s criminal code.

During his final address to ‘the court’ in Rostov (Russia), Mamutov made it quite clear what the additional charge was about.   After being in SIZO [remand prison] for four months, he was summoned to the head of the SIZO who told him that if the four men did not ‘cooperate’ with the investigators,  they would be charged with a violent seizure of power, and that “then Abiltarov; Abseitov and Memetov will not get up to five years’ imprisonment, but from ten or more”.  It was because they had refused to give false testimony that the new charge was laid, he said.

This practice has long been reported by the Memorial HRC, with the only difference now in Crimea being that not one of the Ukrainian Muslims has agreed to testify against himself and the others, and the additional charge is now added in all cases.

It was no accident that Mamutov was told only that the charges against the other men could depend on their ‘compliance’, not those against him.  It became clear during the first trial of four Crimean Tatars from Sevastopol when the judges demonstrated a flicker of conscience and refused to impose the horrific sentences demanded, that the FSB would not tolerate any flexibility in the case of those accused of ‘organizing’ a group.

There are other forms of reprisals against men who speak out, however, and Mamutov’s final address demonstrated great courage.  He spelled out all of the lawlessness of the charges and the lack of any evidence to back them.  All of the witnesses who had appeared openly had given positive testimony about the four defendants.  It was only the three so-called ‘secret witnesses’, whose identity is not revealed to the defence, who repeated, virtually verbatim, the FSB’s charges against the men.  There were no good reasons for concealing any ‘witnesses’ identity, Mamutov said, unless the prosecution and court’s aim was to prevent the defence from demonstrating that the testimony was false.  On a number of occasions, the defence’s attempts to prove the lies were obstructed by the judges.  As reported earlier, these supposed secret witnesses had invariably ‘remembered’ in detail entire conversations while being unable to correctly answer any questions about, for example, the layout of Zevri Abseitov’s dental surgery where the conversation had supposedly taken place.

Mamutov was even more scathing of the so-called ‘expert assessments’ and cited several examples to demonstrate both their ignorance and their bias.

“…When Muslims say that you must work, look after your family, that does not mean to create a world Khalifate and seize power, it means to work, to treat people’s teeth, build homes and cook pilaf and shashlik.

If people in conversation use the words “to defend religion”, that means to defend themselves, and not to attack.

What kind of low and grubby thinking must you have to interpret defence as attack”.

“However much you persecute me, my people and Muslims in general, we spoke and will continue to speak the truth”.

“What is happening today in relation to me and to all the Crimean Tatar people, to Crimean Muslims, is politically motivated persecution for dissidence.  Before the pretext of enemies of the people was used to fight dissident views, now they claim it to be about fighting terrorism and extremism. However both then and now, the charges are based on blackmail, on pseudo-experts, and fake witnesses, on fiddling the facts and distorting what people say.  I would like to wish that my people and all Muslims continue their peaceful resistance to pressure and persecution, and uphold the interests of their compatriots.”

On 24 December 2018, the military court in Rostov-on-Don (presiding judge Roman Konstaninovich Plisko, Anatoly Vladislavovich Kolesnik and Igor Vladimirovich Kostin)  sentenced Enver Mamutov to 17 years’ maximum security imprisonment, as demanded by the prosecutor.  Rustem Abiltarov; Zevri Abseitov and Remzi Memetov were ‘found guilty’ of all charges, but sentenced to 9 years, rather than the 10 or 12.5 years that the prosecutor demanded.

On 11 July 2019, the Supreme Court in Russia upheld these totally unwarranted convictions, but reduced the sentence each time by three months.  It is possible that this was to avoid a sum total of 44 years’ imprisonment which, understandably, elicited bitter memories of 1944 and Stalin’s Deportation of the entire Crimean Tatar people.  Russia is now deporting Crimean Tatars to prisons in Russia.

There was a further echo from the Soviet past with around 50 Crimean Tatar activists detained in Moscow outside the Supreme Court building where they were peacefully demonstrating their support for the four political prisoners. The questions the men wore on their T-shirts could not have been more pertinent: 17 years – for what???”

In declaring all four men political prisoners, the Memorial Human Rights Centre pointed to the lack of any grounds for ‘terrorism’ charges, as well as to the fact that Russia is an occupying state which has no right to apply its legislation in Crimea.

The letters tell them they are not forgotten, and show Moscow that their actions are being followed.  Letters need to be in Russian, and on ‘safe’ subjects.  If that is a problem, use the example letter below (copying it by hand, typed letters will also not pass the censor), perhaps adding a picture or photo.

Zevri Abseitov was born on 12 August 1975.  A talented dentist, he once gave up a good work opportunity in Poland because he could not leave his elderly parents. His 81-year-old mother, Nadzhiye died on 22 May, 2019, three years after her son was taken from her and from his four children.  Address