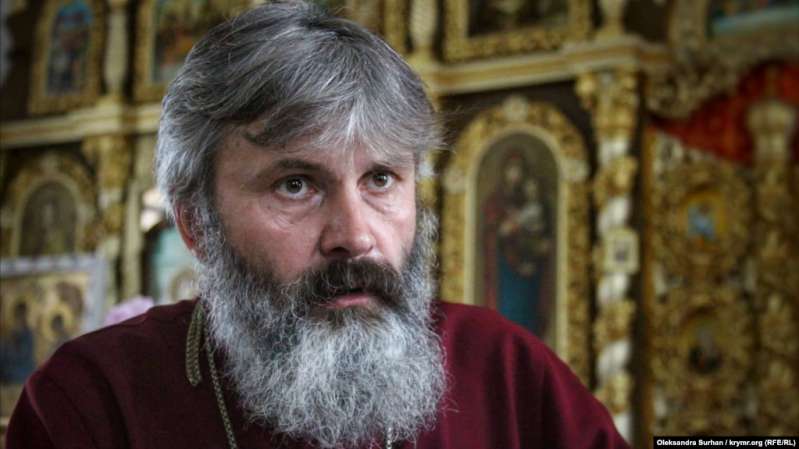 The Archbishop was commenting on a vital, albeit extremely belated, resolution passed by Ukraine’s Cabinet of Ministers at the beginning of March.  While Crimea is occupied, this transfers the Cathedral of Saints Vladimir and Olga in Simferopol to state ownership.

The move may seem theoretical, but it is not.  As Oksana Kolyada, Minister for Occupied Territory, explained, Ukraine is showing that it will defend its property while the peninsula is occupied.  The move can be used as an instrument, with Ukraine calling upon its partners in the world and international organizations to defend Ukraine’s Cathedral and its believers from the occupiers.

Archbishop Klyment also believes that the move, if supported by Verkhovna Rada legislation, will help preserve the Cathedral in Crimea.  He has, in fact, been pleading for this since Russia’s invasion and annexation of Crimea.  For over six years, he has had to fight, not only to retain the Cathedral in Simferopol, but to preserve the Orthodox Church of Ukraine in Crimea, which he calls the only island of Ukrainian identity and spirituality on the occupied peninsula.

Once the resolution has been affirmed by parliament, it will be possible to develop a specific algorithm for countering attempts by the Russian occupation regime to take the Cathedral away.  After fighting the battle alone, he says, now he will have the Ukrainian state and the international community on his side.

Russia’s persecution of the Ukrainian Orthodox Church began soon after its invasion and annexation. Open repression might well have prompted further sanctions, and the occupation regime focused instead on demanding unacceptable ‘re-registration’ under Russian legislation and on depriving the Church of its land and places of worship. The Russian occupiers claimed that the land, which, under Ukrainian law, was the property of the Autonomous Republic of Crimea, was ‘federal Russian property’ which the Archbishop was illegally occupying.  This was absurd, but Klyment could not argue this alone since the land was under effectively permanent lease for a nominal fee, not the Church’s private property.  That made it much more difficult to protect legally at international level, and Klyment made repeated approaches, only to be told by Ukraine’s Ministry of Culture that the Ukrainian government could not do anything since Crimea was not under their control and by another minister, that Ukraine didn’t have any mechanisms.  Deeply frustrated, the Archbishop even went on hunger strike late last year, demanding measures to resolve the situation and protect believers in Crimea.

While Russia may want to continue its persecution of the Church as though nothing has happened, the responsibility now lies with Ukraine’s lawmakers to protect the Church and its believers.

There is nothing at all abstract about this, as the Archbishop spelled out.  Ukraine does have a powerful lever, namely the Orthodox Church under the Moscow Patriarchate in Ukraine and its very considerable property, including the Pecherska Lavra in Kyiv.  Let those in Moscow understand that, if the Ukrainian Orthodox Church in Crimea is dissolved, then the same will happen to the (effectively) Russian Orthodox Church in Ukraine.

Perhaps, as Klyment says, it is God who has enabled services to continue in at least part of the Cathedral.  It does, however, seem likely that the court hearings are being dragged out because of international pressure, on the one hand, and concern that Moscow could lose its church and property in Ukraine, on the other.

Russia’s attempts to evict the Diocese from the Cathedral is also flouting interim measures imposed by the UN Human Rights Committee back in September 2019.  This was on the application of lawyer Serhiy Zayets, who is representing fifty members of the congregation who complain of persecution by the Russian occupation authorities. On 6 September 2019, the Committee informed that they had accepted the case and had ‘requested’ that Russia not evict the congregation until the case had been considered.  While Russia has appeared to be ignoring this, with ‘court hearings’ continuing regardless, the fact that the Archbishop was able to celebrate Easter in the Cathedral, which is open every day, probably shows that Moscow is nervous of that final move.

This move is also part of the aggressive offensive and repressive measures against the Ukrainian Church in Crimea since annexation and against Klyment himself.

The Archbishop reported on 8 February 2019 that he had received a writ ordering that he vacate the Cathedral within 30 days.  The Archbishop then warned that this was likely to lead to eight parishes in rural areas also being forced to close. On 27 March, the Church received another letter from this ‘ministry’, which terminated the lease agreement . The letter claimed that this was because the Church is in debt, however the sum was nominal, and in fact the Archbishop denies that anything at all is owed.

By the end of August 2019, the Russian-controlled court of appeal had upheld the ruling of the de facto ‘Crimean Arbitration Court’ from 28 June 2019 which had ordered the dissolution of the lease agreement for the Cathedral of Vladimir and Olga signed in 2002 between the Ukrainian authorities (the Crimean Property Fund) and the Crimean Diocese of the Ukrainian Orthodox Church under the Kyiv Patriarchate.  Although the court hearings are still dragging on, the occupation regime has not waited and has already begun destroying Church property under the guise of ‘renovations’.