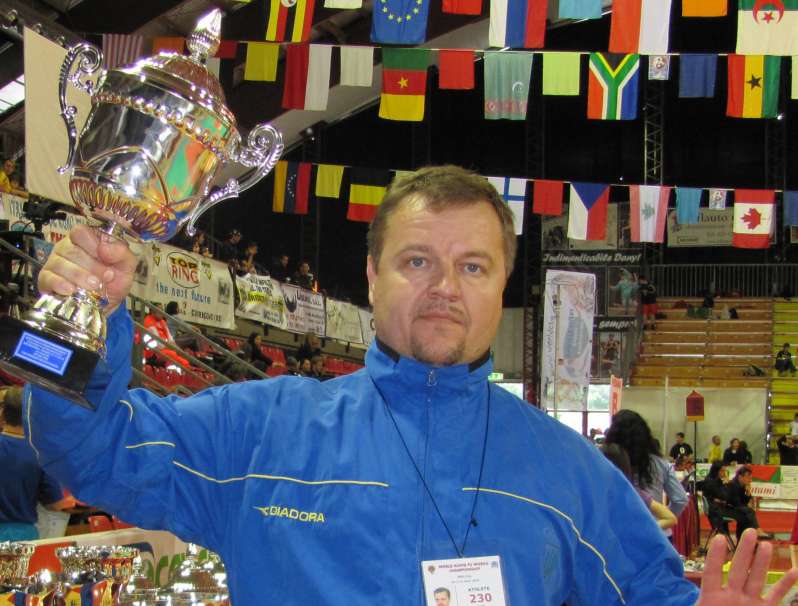 Oleh Shevandin, a well-known Wushu and KungFu champion, was taken prisoner by militants from the Russian proxy ‘Donetsk people’s republic’ [DPR] five years ago.  The militants are refusing to give any information about his whereabouts, however the car he was driving is known to have been used by at least the Russian commander, ‘Zarya’, responsible for the seizure.

Shevandin is the President of the Wushu and KungFu Federation for the Donetsk oblast and helped train the Ukrainian national team.  He was well-known in the Donetsk oblast as leader of one of the largest and most successful sports organizations in the region, and it was in part thanks to him that Debaltseve hosted an inter-regional championship for around 15 years before the events of 2014.  Shevandin was also active in organizing youth programs, such as one promoting a healthy lifestyle, and also different international projects.

Debaltseve is a strategic railway hub which was under Ukrainian government control on 12 February 2015 when Russian President Vladimir Putin agreed a ceasefire with the leaders of Ukraine, France and Germany in Minsk.  Within hours of this supposed ‘ceasefire’, the DPR militants had stated that, with respect to Debaltseve, it would not be observed.  The deceit was almost certainly instigated by Putin and there is plenty of evidence of direct Russian military involvement in the battle.  Journalists from the Conflict Intelligence Team have produced evidence suggesting that it was, in fact, Putin who ordered the offensive.

Shevandin’s family had their own business in Debaltseve which was partly destroyed, partly plundered after the battle for Debaltseve. The family’s home was badly damaged by a GRAD missile, and the homes of Shevandin’s mother, and his wife, Larisa’s parents were also damaged.  Unsurprisingly, the family saw no choice but to leave and moved to government-controlled Sloviansk.

Shevandin’s 82-year-old mother had remained in Debaltseve and urgently needed her son’s help which is why he set off on that fatal trip.  His wife notes that very few people knew of his plans, and must suspect that somebody turned out to be an informer as the DPR militants were clearly waiting for him when he arrived at a checkpoint in occupied Donbas on 1 May 2015.  He was seized by masked DPR men who put a bag over his head before taking him away, together with the car.

The so-called DPR prosecutor confirmed the following day that Shevandin had been seized by the DPR seventh ‘military brigade’ in Debaltseve.  It would have been hard to do anything else since the car was seen soon after Shevandin’s abduction on the territory of the seventh brigade’s headquarters.  Larisa Shevandina explains that Zarya moved it secretly at night to Donetsk, to another military base, and that this was confirmed by the so-called ‘DPR military police’, who took photos of it.   The car, which was registered in the name of Shevandin’s son, Oleksiy, was then again hidden, and only discovered during an attempt to get it across the border into Russia. It had been illegally registered under a different name.

The family know only that Shevandin himself was taken on 3 May to Donetsk with the militants accusing him of spying for Ukraine.   His captors have refused to give any information about where he is imprisoned, and have not included him on the exchange list.

Larisa Shevandina is convinced that the Ukrainian authorities are not doing enough to secure the release of her husband and has turned to international organizations in the hope that they can help.  She believes that there needs to be particular attention to cases like that of her husband where DPR are not even revealing where they are holding hostages prisoner. Her husband has now been in captivity for over five years, very likely in one of the secret prisons, like Izolyatsia, where horrific torture is applied and to which international monitors are repeatedly denied access.  Larisa is hoping that President Volodymyr Zelensky will take the case under his personal control since, after five years, she fears that there can be no resolution without his involvement.