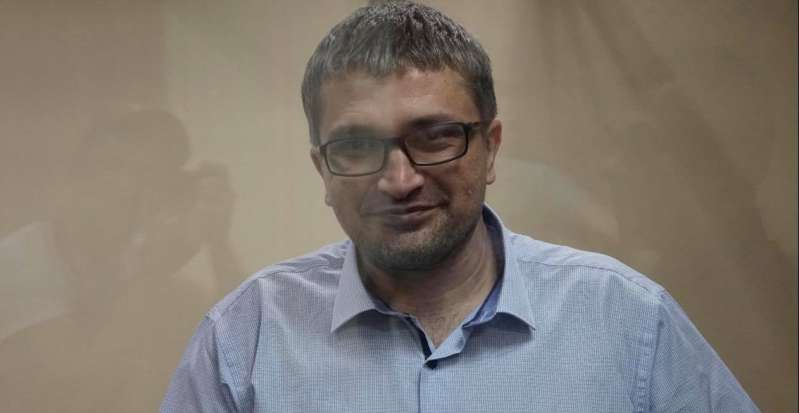 If, as Kremlin-loyal academics claim, “the Deportation under Stalin was not part of the Russian state’s tradition”, “what am I doing here?”, Nariman Memedeminov asked in a Russian court on 14 May 2020.  During Russia’s trial of the Crimean Tatar civic journalist and activist, the FSB effectively admitted that he had been arrested because he had tirelessly reported on cases of political repression under Russia’s occupation of Crimea.   With around 70 Crimean Tatars imprisoned in Russia, most for their civic activism, Memedeminov is not alone in naming three tragic years for the Crimean Tatar people: 1783 (when the Russian empire first seized Crimea); 1944 and 2014.

Together with political persecution, Russia’s annexation of Crimea brought entirely predictable court rulings, and the hearing on 14 May in the Military Court of Appeal (Moscow region) was no exception.  The judges upheld the internationally condemned 2.5 year prison sentence against Memedeminov, and further 2 year muffling order, for three entirely innocuous YouTube videos, two of which were posted before Russia’s invasion and annexation of Crimea.

Since Memedeminov had already been imprisoned for well over two years, the judges would have been especially loath to annoy the FSB by overturning the sentence, for all that it was manifestly unjust.  One does wonder, however, what they sat and thought about  during Memedeminov’s powerful address to avoid confronting their own complicity.

Identifying himself as a Crimean Tatar, a Muslim, and a citizen of Ukraine, Memedeminov demanded that they stop lying and calling this a criminal cases, when it is politically motivated persecution, and that the charges be dropped.  They should apologise to his family and to the Crimean Tatar people whom they have slurred through persecution of decent, law-abiding people.

As soon as any Russian law came to Crimea, Crimean Tatars, like all ‘dissidents’, were labelled ‘terrorists’ and ‘extremists’. There can be no suggestion of any justice in all of this, he said, and noted that, even when they were supposed to be demonstrating how they “successfully fight destructive elements”, they always seem to find a pretext for hiding behind closed doors.  Judges, who are empowered to ‘practise justice’, prove instead to be hostages to political demands. Yet they don’t seem to care, he said, and called such indifference staggering.

It was not the Middle Ages that Crimeans were dragged into in 2014, but into a time of inhumanity where there isn’t a trace of justice or rights.

Memedeminov quoted the famous words by Edward Burke, that “the only thing necessary for the triumph of evil is for good men to do nothing”, calling this essentially the law of human life.  It is also the reason why Russia’s enforcement officers are having no success in trying to foist yet another label on Crimean Tatars.  The experience of the non-violent movement for their rights was handed down to them from their parents and grandparents.

“And therefore, thank God, good people did not do nothing, but all around took the side of the political prisoner of our day and have supported us and our families. As before, among my people a large, active group of activists, journalists, human rights defenders and observers has formed, reacting to lawlessness and continuing the non-violent struggle for our rights….”

Memedeminov ended by stressing the need for his journalist colleagues to pay particular attention to the question of Crimea and persecution of the population and of activists on ethnic and religious grounds, as well as on professional grounds in the case of journalists and human rights defenders.  Memedeminov is one of 10 civic journalists whom Russia has imprisoned, and the others are facing sentences of up to 20 years on totally fabricated and flawed charges (details here).

Armed and masked men burst into Memedeminov’s home on 22 March 2018, used foul language and gratuitous force and forced Memedeminov to the floor in front of his three terrified children.  He was taken away and has been imprisoned since although, as mentioned, the charges against him pertained only to three YouTube video clips, two of which were from 2013.

This was and remains nonsense.  In the video posted on 7 June 2013, Memedeminov pointed to a gathering of Hizb ut-Tahrir followers behind him, explaining the essentially theological aspects of Muslim faith that would be discussed.  Hizb ut-Tahrir is a peaceful pan-Islamist movement which is legal in Ukraine, and this meeting was, even Russia would not deny, taking place on Ukrainian territory. Russia is the only country in the world to have declared Hizb ut-Tahrir ‘terrorist’ and has never provided any good grounds.  Since 2014, it has been using ‘terrorism’ charges for political trials and imprisonment, including in occupied Crimea.

The real motive for the prosecution was scarcely concealed.  Memedeminov is a civic journalist and one of the first people to have systematically reported on politically-motivated trials in occupied Crimea.  He was the media coordinator for the civic initiative Crimean Solidarity which has come under sustained attack for its unwillingness to be silent about repression.