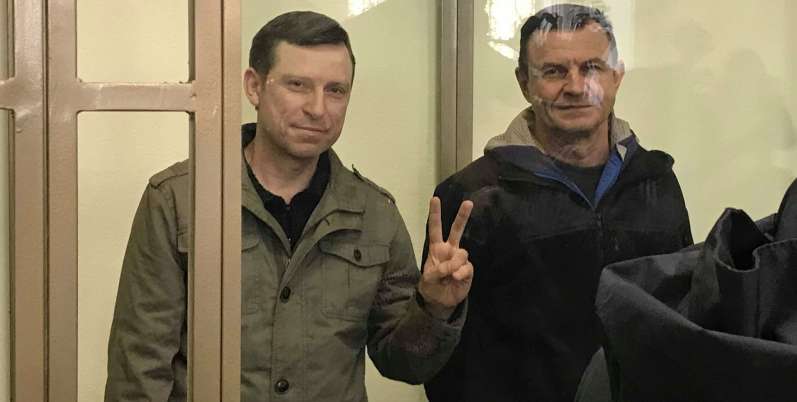 The authoritative Memorial Human Rights Centre has formally declared Volodymyr Dudka and Oleksiy Bessarabov political prisoners and believes that the Russian authorities fabricated the charges against the two Ukrainians from Crimea of planning acts of sabotage for propaganda purposes as part of a long campaign to present Ukraine and its citizens as the enemy.  Memorial considers that Dudka, now 55, and Bessarabov (43) were targeted on professional grounds, because both are retired Ukrainian naval officers and because of their strong link with Ukraine.

The human rights group is convinced that the original ‘confessions’ that the men gave were tortured out of them with the use of electric shocks.  Both retracted their statements as soon as they were allowed to see proper lawyers, and it is likely that the horrific 14-year sentences were so severe in reprisal for their firm rejection of the charges against them.

In explaining its assessment, Memorial points to the fact that both men were held incommunicado and without lawyers for over a week. They later gave detailed accounts of the torture through electric shocks used to extract videoed ‘confessions’.  which were then used by central Russian TV channels as supposed proof of Kyiv’s crimes.  Other Ukrainians have been forced into giving such confessions on video and have later described the torture they suffered.

Memorial has examined the case and believes that the FSB did not provide any serious proof of a crime.  It notes that the men’s biological traces were not found on the alleged hiding place of explosives.  As reported earlier, such traces were allegedly ‘found’ on a map of the city which the men are supposed to have used in planning acts of sabotage.  In fact, an expert analysis found that the traces were only on the edge of the map and not over the entire surface, which would make no sense if this were really, as asserted, a map that the men were using.  Both men had earlier complained that saliva and other samples had been taken without any protocol being drawn up and without lawyers present, making it very easy for them to be used to falsify evidence.

The lack of hard evidence is especially telling given that the FSB had the men under video surveillance and their telephones were being tapped.  There was not one video or audio-recording that could even remotely confirm any plans to carry out acts of sabotage.

Instead of recordings, the FSB came up with alleged correspondence on the messenger Viber. Memorial points out that there are strong grounds for believing this to have been fabricated, and that the telephones were planted.  Dudka’s son has long reported that the men who came to ‘search’ his father’s home quickly ‘found’ what they had brought, and then left, without bothering to pretend to search the kitchen or bathroom.

Dudka’s lawyer, Sergei Legostov, called the prosecution’s story about the telephones “worse than the shoddiest of detective novels”.  It was claimed that an unidentified person involved in Ukrainian military intelligence in Kharkiv had asked a stranger in Crimea to buy the telephones and pass them over to the defendants – for them to then be ‘found’ when the FSB turned up.

This was the FSB’s second ‘Ukrainian saboteur’ case In 2016.  It had encountered open disbelief from international observers for its first try, in which four men who had never set eyes on each other were supposed to have planned acts of sabotage together.  The next time around, on 9 November 2016, three former naval officers and friends were targeted: Dudka, Bessarabov and the latter’s colleague, Dmytro Shtyblikov.

The FSB claimed  on 10 November, 2016, that the men seized the day before were  “members of a sabotage – terrorist group of the Ukrainian Defence Ministry’s Central Intelligence Department” who were planning acts of sabotage on military and other infrastructure”.

They placed all men under enormous pressure and prevented Shtyblikov, whom they had designated as the leader, from seeing an independent lawyer at all.  Given the torture methods that Bessarabov and Dudka have described, it seems very likely that Shtyblikov experienced similar or worse treatment.  Without having been allowed a lawyer, he agreed to plead guilty and was sentenced on 16 November, 2017 to five years’ imprisonment after a ‘trial’ lasting just minutes (details here).

It is presumably because of this plea that Memorial has not mentioned Shtyblikov in its statement on 15 May 2020, although it has followed the case from the outset and indicated earlier that it considers all those targeted to be victims of persecution.

It seemed clear that this ‘Ukrainian saboteur’ case was the result of the FSB’s illegal access to Ukrainian naval documents in occupied Sevastopol.  Two younger men, with similar professional backgrounds, Oleksiy Stohniy and Hlib Shabliy were arrested 10 days later. That, at least, was what the FSB claimed, though, in fact, Stohniy was arrested at a different time and place, with the videoed images of his apparent arrest staged for the camera. Both Stohniy and Shabliy were later convicted of charges that had virtually no connection to the sabotage that they had ‘confessed to’.

Bessarabov and Dudka were sentenced on 4 April 2019 to 14 years’ imprisonment and steep fines, with the sentences so high almost certainly because both men had refused to ‘cooperate’ with the FSB.  Judges Igor Vladimirovich Kozhevnikov; Vasily Aleksandrovich Avkhimov; and Vladimir Ilych Reshetnyak, from the South Caucuses Military Court in Rostov ignored the considerable evidence of falsification and total lack of real proof, as well as the men’s consistent accounts of torture.  Russia’s Supreme Court proved just as willing to condone political persecution and upheld the sentences in full on 15 October 2019.