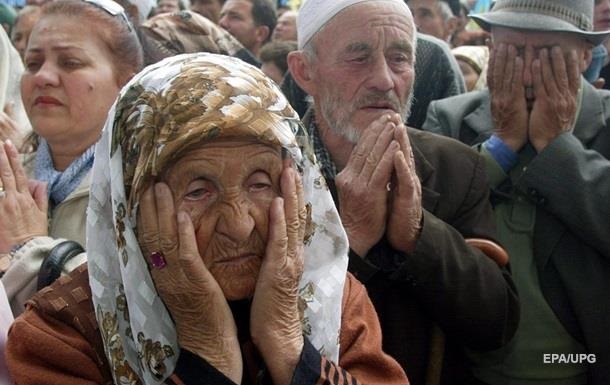 Russia’s occupation regime has marked the 76th anniversary of the Deportation of the entire Crimean Tatar people on 18 May by warning against ‘provocation’ and ‘aggressive sentiments’ and threatening to break up any remembrance gathering.  The Deportation, recognized by Ukraine as an act of genocide, jars badly with Russia’s glorification of the Soviet victory in WWII and whitewashing of Joseph Stalin.  This is only one of the reasons why Russia has tried to commandeer and otherwise ban this bitter anniversary since annexation.

At an online press conference on 15 May, Albert Kangiyev, described as head of the committee on inter-ethnic relations, asserted that “18 May is first and foremost a day of memory and sorry, as well as for reconsidering all that has been done for rehabilitated peoples in Crimea, and not the expression of any aggressive sentiments”.

The suggestion that any Crimean Tatar or other Ukrainians planning to honour the victims of the Deportation had ‘aggressive sentiments’ was only one of the distortions in Kangiyev’s deeply dishonest words.  Others pertain to his attempt to blur what this anniversary represents and to talk about ‘rehabilitated peoples’ altogether.

Only the Crimean Tatars were an indigenous people driven from their one and only homeland, and it was only they who were prevented from returning home for almost 50 years.  The current Russian regime, under President Vladimir Putin, is going to enormous lengths to deny Crimean Tatars their status as indigenous people.  This is almost certainly linked with the fact that the majority of Crimean Tatars have clearly demonstrated their identification with Ukraine.  It is they also who have faced the worst persecution under Russian occupation.

It is hardly surprising that many of the political prisoners arrested since Russia’s annexation have come to understand all too vividly the stories that their grandparents told of the Deportation and the years of exile, mostly in Uzbekistan.

The horror began in 1944 very early in the morning of 18 May.  Thousands of NKVD officers burst into Crimean Tatar homes, often giving mothers with young children and the elderly just minutes to gather anything they could.  More than 183 thousand Crimean Tatars were forced from their homes between 18 and 20 May 1944 in an operation carried out with enormous brutality.

It should be stressed that the figure here does not count the thousands of Crimean Tatar men who were still fighting in the Soviet Army. This should be remembered, given the monstrous lie about ‘Crimean Tatar collaboration with the Nazis’ used to try to justify the Deportation.  Many of these soldiers returned with medals, after demobilization in 1945, only to be deported as supposed ‘traitors’.

Despite the Supreme Soviet’s decree from 5 September 1967 which called attempts to level accusations against some Crimean Tatars of collaboration at the entire Crimean Tatar population groundless, the lies have recently been resurrected under Russian occupation, with an attempt even to add them to a school history textbook.

Although the official figure of deaths during the gruelling journey in overcrowded goods trains is only 191, this number is almost certainly a serious underestimate.  It is estimated that as many as 46% of the Crimean Tatars died during the first two years of deportation and exile.

Veteran Crimean Tatar leader Mustafa Dzhemilev has called this “a day that indeed turned the entire history of the Crimean Tatar people upside down, and sent them decades, if not centuries, back. After all this was no mere resettlement, but an operation aimed at the destruction of a people. it is therefore entirely fitting that the Verkhovna Rada recognized t[the Deportation] as an act of genocide.”

Dzhemilev stresses that the Soviet regime also set about destroying everything linked with Crimean Tatars, their culture and like, with even cemeteries destroyed.   Nothing that was taken away from them was ever returned.

In an important article entitled ‘Deportation. A Crime without Punishment”, Pavlo Kazarin writes that “Russia, it seems, has built itself a civic religion around 9 May [Victory Day].  And has blotted out the Crimean Tatars from it.”

There are only a few days separating Victory Day from the anniversary of the Deportation, however the difference is huge.  While 9 May is celebrated with lavish pomp, they try not to notice 18 May.  “Because memory of it threatens to destroy all that modern Russia is based on”.   How, indeed, can you explain the fact that the indigenous people of Crimea were banished from their homeland after Crimea was liberated from the Nazis?  Or why it was they who were not allowed to return, essentially until the end of the Soviet regime and Ukraine’s Independence?

Kazarin, who was himself forced from Crimea by Russia’s annexation, writes that the Soviet mythology outlived the demise of the Soviet Union specifically in Crimea.  He says that the pro-Soviet nostalgia set roots deeper in Crimea than in other parts of the former empire and that the myth about Crimea having ‘always’ been Russia was jealously preserved.  This Soviet myth made it possible to remove the Crimean Tatars from the history of Crimea, to repeat the lies about them being traitors in order to then deny them their right to their own home.

Kazarin believes that this separate and much worse treatment of the Crimean Tatars was because their tragedy overturned the main myth of the Soviet empire, that of the so-called ‘Great Patriotic War’.   According to such mythology, this was the fight of absolute Good against absolute Evil.  How could you maintain this simplistic view if it turned out that “in Crimea Good defeated Evil and then, on 18 May 1944, itself committed a crime”?

The Deportation of the indigenous people enable a ‘readjustment’ of the history of Crimea.  Crimean Tatar names of places were changed, history textbooks, and even the lyulya-kebab was, until the collapse of the Soviet Union, was referred to as “Simferopol sausages”.

This old Soviet mythology has now been resurrected by modern Russia, with the ‘Great Patriotic War’ even used to justify what came before and after.  The Crimean Tatars he says, since annexation “are doomed to live in a country which blots them out of its own history.”

They have been given a very simple choice, Kazarin says.  They can accept all of these lies, including the effective justification of everything during the War, with this including the Deportation.  Or not, but then they will continue to be viewed as “potential violators of the Russian Federation’s territorial integrity”, with all the consequences that follow from this.

Kazarin is writing as though Russia’s occupation of Crimea will never end, with this something that depends on Ukraine’s actions, and those of the international community.  There are, undoubtedly, other factors, as well.  Although Crimean Tatars have been the main victims of persecution under modern Russian occupation, they are not the only Ukrainians persecuted.  Putin’s regime needs to justify its repressive measures and all that it promised but did not bring to occupied Crimea by pointing at scapegoats and supposed ‘enemies’.  While this includes all those Crimean Tatars and other Ukrainians who take a civic stand, it also leads to people being persecuted almost arbitrarily.  When a new ‘Ukrainian saboteur’ trial or Ukrainian ‘spy’ is required, essentially any Ukrainian will do.