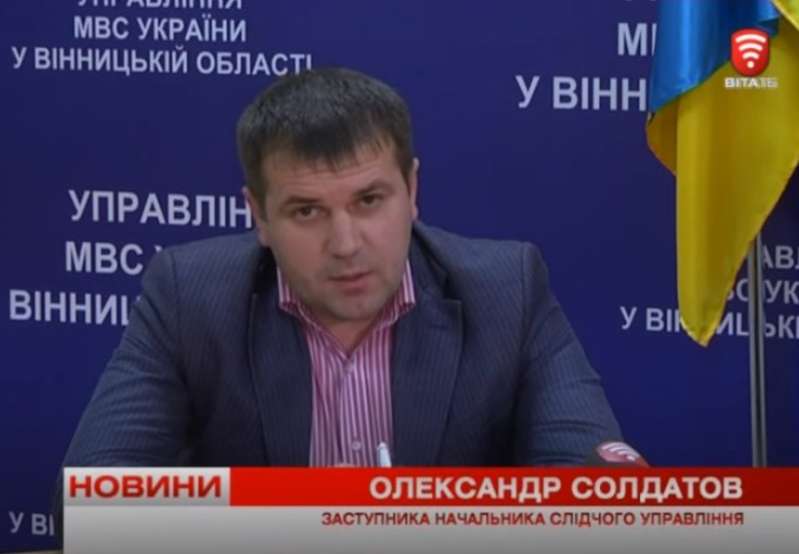 Questions certainly needed to be asked after the mass shoot-out in Brovary (Kyiv oblast) on 28 May, including why the arrival of so many ‘titushki’, or paid thugs, from other regions was ignored for so long.  Heads have now rolled, with the Chief of the Vinnytsa Regional Police, Yuri Pedos, one of the people who has lost his post.  While there may well have been grounds, the choice of replacement is deeply disturbing.  Oleksandr Soldatov played a major role in the persecution of Dmytro (Dima) Groisman which almost certainly contributed to the well-known human rights activist’s premature death.  Instead of answering for his part in a politically-motivated prosecution, Soldatov continued his police career and has now been appointed to the highest police post in the Vinnytsa oblast.

Oleksandr Soldatov was a police investigator back in 2010 when he initiated and took part in the evidently wrongful criminal prosecution against Dima Groysman, the founder and head of the Vinnytsa Human Rights Group.  Groysman was active both in helping asylum-seekers and in exposing torture by the police and in prisons.  According to lawyer, Yevhenia Zakrevska, it was Soldatov who received a search warrant for Groysman’s home which was illegally extended to become a search also of the Vinnytsa Human Rights Group office in an adjoining flat.

There is simply no possibility that Soldatov could have believed that any of the charges against the human rights activist were warranted.  The charges laid in October 2010 were under two articles of Ukraine’s Criminal Code. He was accused of “desecration of State symbols” (Article 338 § 1) and disseminating pornography (Article 301 § 1).

Despite the fact that the search was linked to a charge of ‘circulating pornography’, the police who carried out the two searches on 16 October 2010 removed financial and other documents from the Vinnytsa Human Rights Group, as well as a large amount of confidential information about asylum-seekers.

Given that Soldatov was the investigator, it is worth spelling out what the charges were about.

The image deemed a criminal offence can be seen here and dates back to July 2009. In June 2009 a number of human rights and media organizations had called on President Yushchenko to veto planned amendments to the Criminal Code criminalizing possession of pornographic material for the purpose of sale or circulation. The law was heavily criticized for failing to achieve its supposed purpose of fighting child pornography while at the same time imposing unwarranted restrictions on freedom of expression. It was this that aroused Groysman’s anger, which he expressed in a modest person blog.

There were two charges under Article 301 § 1, with the first relating to Groysman’s entry here di-mur.livejournal.com. The clip showed people similar to some well-known Russian figures and was freely available for viewing on YouTube.

These were the ‘criminal’ charges that Soldatov ‘investigated’ over the next three years, with Groysman facing a prison sentence.

Dima Groysman died on 5 August 2013, aged just 41.  The heart attack he had suffered was officially caused by an existing heart condition, but the stress he had been under for almost three years was almost certainly also a factor.

The criminal proceedings ended in his posthumous ‘acquittal’ on August 12, 2013.  The court in Vinnytsa “found no elements of a crime”.

There is nothing to suggest that any of those involved in the fabricated prosecution faced even disciplinary proceedings.  Quite the contrary, since Soldatov is not the only police officer to have received promotion in post-Maidan Ukraine.  Dmytro Rudenko, who also played a major role in Groysman’s persecution was appointed Head of the Khmelnytsky National Police in May 2016.  Although public outrage may have helped prevent promotions to top posts in the State Bureau of Investigations and National Anti-Corruption Bureau [NABU], in October 2019 he was reported to have received a top post within the Vinnytsa Police, checking that other police officers do not abuse their position or commit offences.  There too, the day of his appointment proved to be the day that he ‘went on leave’, and it is not clear if this has ended.  Rudenko expressed indignation that there was “so much attention to his modest person”.  However, it seems that public attention is the only chance of influencing bafflingly incomprehensible police appointments.