Sentenced to eight years in a Russian prison for being Ukrainian 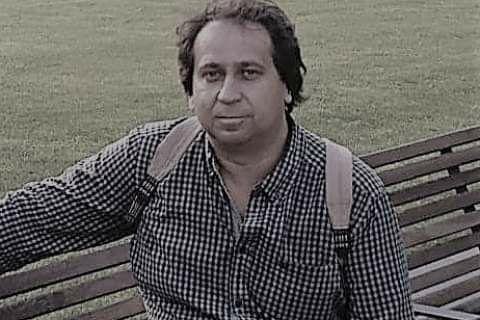 Two Ukrainians imprisoned in Russia would almost certainly not be there were it not for their nationality, and there may well be many more such victims of Russia’s undeclared war against Ukraine. Although virtually nothing had long been known about Serhiy Buhaichuk, the disturbing similarities between his case and that of Oleh Chaban give legitimate grounds for concern about Buhaichuk’s shocking eight-year prison sentence and for believing that both Buhaichuk and Chaban should be considered political prisoners.

It was Mark Feygin, the Russian lawyer defending Ukrainian journalist and political prisoner Roman Sushchenko who, back in July 2018, first drew attention to a second Ukrainian who was being held prisoner in the FSB’s Lefortovo Prison in Moscow.  Serhiy Buhaichuk is a train conductor from Rivne (Western Ukraine).  The then 43-year-old was arrested on 11 July 2018 and charged with ‘smuggling’ a Glok 19 pistol and parts for it to Moscow (another report mentions the pistol, but asserts that there were also 10 barrels for a Makarov pistol).  He was alleged to have done this as part of a gang of three people.  Nothing was found during the search of Buhaichuk and his possessions, and the charges were based solely on the ‘testimony’ of a Russian detained much earlier and held in SIZO [a pre-trial detention centre].  The latter ‘cooperated’ with the investigators, almost certainly for some reduction in his charges, or similar.  There was supposed to be a third person in the alleged ‘gang’, a person called ‘Vladimir’ whose identity (or existence?) was never established.

The case was run by the FSB, with Buhaichuk charged under Article 222 § 3  of the Russia’s criminal code - Illegal acquisition, transfer, sale, storage, transportation, or bearing of firearms or their components, if carried out by an organized group.

Buhaichuk has constantly denied the charges, despite almost certainly being under physical and psychological pressure from the FSB ‘to confess’ during the period when he was held without any contact with an independent lawyer and his family.  At the first detention hearings, Buhaichuk had only a state-appointed lawyer, however he has since been represented by Dmitry and Olga Dinze, Russian lawyers who have defended a number of Russia’s Ukrainian political prisoners.

Despite the lack of any evidence, except the testimony of one man already in detention and with a likely vested interest in ‘cooperating’ with the FSB, Buhaichuk was sentenced on 12 February 2020 by a court in Bryansk to nine and a half years’ imprisonment – longer than the 5-8 years envisaged by Russia’s criminal code.  The appeal court on 9 June 2020 merely reduced the sentence to eight years.

In May, Ukraine’s Human Rights Ombudsperson, Ludmila Denisova reported that Buhaichuk had a number of Covid-19 symptoms, but had received no medical care.  She called on her Russian counterpart Tatyana Moskalkova to get involved, but there is nothing to suggest that the latter took any steps.

Buhaichuk’s wife, Tetyana is convinced that the Human Rights Ombudsperson should be included in the negotiations to secure the release of her husband, and all the other political prisoner whom Russia is holding.

Buhaichuk has an adult daughter, Yana, from a previous marriage and an 11-year-old son, Timur who has not seen his father for two years.  His daughter married in 2018, and Buhaichuk has a granddaughter whom he has never seen.

One of the many reasons for serious doubts about the charges against Buhaichuk is that the case is so similar to that against Ukrainian coach driver Oleh Chaban,  He was arrested two months earlier, on 18 May 2018, in the Bryansk oblast (Russia) on 18 May 2018, supposedly for transporting explosives and Glok 19 pistols.  Neither Chaban’s fingerprints nor his DNA were on the items supposedly ‘found’ during an FSB search during the night after the coach that Chaban was driving broke down.  The vehicle had already undergone checks by both Ukrainian border control, and Russian, without anything being noticed.

Chaban was simply the driver for a coach from Vinnytsa to Moscow, and did not himself receive or issue luggage. The fateful journey to Russia was not even a scheduled run for him.  He had been phoned just three hours before and asked to replace a colleague.

The items in question were found in the bag of a Russian man, Roman Serebrob, who promptly ‘confessed’.  While Chaban, who had had no contact with anybody’s luggage, was immediately taken into custody, the Russian owner of the bag was released on a signed undertaking not to abscond. His status was later changed from suspect to ‘witness for the prosecution’, with the only charges being laid against the Ukrainian driver who had no way of knowing what was in individual passengers’ luggage.

The Russian ‘investigators’ used all their standard methods of pressure, including isolating Chaban from his wife and from the Ukrainian consul.  Nothing worked, with Chaban continuing to deny the charges.  .

Since there was nothing to link Chaban with the items allegedly found, the prosecution added a second ‘secret’ witness, whom they called ‘Viktor Alvarez’, the hero of a Russian ‘Comedy Club’ show.  This individual’s identity was totally concealed, making it impossible for the defence to even confirm whether Chaban had ever set eyes on him.  The individual claimed to have been in a cell together with Chaban who had “told him everything.”

The prosecution provided no hard evidence against Chaban and the two ‘prosecution witnesses’ contradicted each other, yet Chaban was sentenced to three years and eight months’ imprisonment, with this confirmed at appeal level.

Chaban and his wife have two children, a 20-year-old son, and a daughter who is still very small.