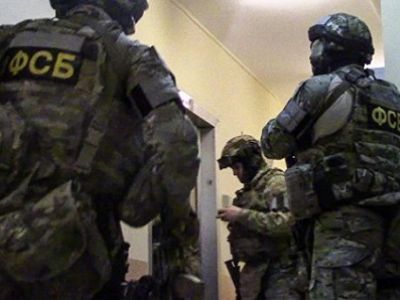 Russia has carried out new armed searches of the homes of Jehovah’s Witnesses in occupied Crimea with 29-year-old father of two, Artem Shabliy arrested and facing criminal charges for his faith. This new act of repression came on the same day that a Russian-controlled Crimean ‘court’ upheld the six-year sentence against 47-year-old Serhiy Filatov.  This is the first prison sentence against Jehovah’s Witnesses in occupied Crimea, and the new offensive made it clear that, under Russian occupation, no believers are safe from persecution.

Armed FSB, Rosgvardia and masked OMON [riot police] officers burst into four homes in the Crimean port city of Kerch on 26 May 2020.  According to the Jehovah’s Witnesses in Russia website, at least seven believers were interrogated, some of them elderly.  Five people were taken to the FSB offices for questioning, although four were later released.

Instead of simply knocking on the door of the home Artem Shabliy shares with his wife, mother and small children (aged 2 and 4), the armed men broke the glass in the windows of the entrance hall.  They put handcuffs on Shabliy which were only removed several hours later, after his interrogation.  One of the men verbally stated that Shabliy was facing charges under Article 282.2 of Russia’s criminal code (organization or involvement in a so-called ‘extremist organization), however nothing was given in writing.  Such raids are normally carried out with flagrant violations of procedure, including the fact that the FSB always bring the supposedly independent witnesses with them.

The criminal proceedings are known to have been initiated by ‘investigator’ Valery Zarubin with Shabliy accused of having “drawn others into the activities of an extremist organization” by discussing the Bible with them.

Shabliy’s wife was also taken away for questioning, with the investigators trying to pressure her by threatening that Shabliy would be imprisoned. She was, however, later released.

Shabliy was held in a police holding facility for two days.  He was released in the evening of 28 May under a signed undertaking to appear if summoned, with the charge indeed under Article 282.2 § 1.1 (‘drawing others into the activities of an extremist organization”).

This was exactly the same charge that resulted in a six and a half year sentence against Serhiy Filatov, passed on 5 March 2020, and upheld at appeal level on 26 May.

This is so far the most severe sentence that Russian or Russian-occupation courts have passed since Russia’s ban on the Jehovah’s Witnesses on 20 April 2017.  Since the ban was in clear contravention of Russia’s own Constitution and the European Convention on Human Rights, Russia’s Supreme Court labelled the world faith ‘extremist’.

This essentially enables Russia to carry out such repressive operations and to imprison any believer since their faith and even their reading of the Bible are treated as ‘proof of extremism’.

As with all cases of religious or political persecution, the one thing that is effectively guaranteed is that no ‘judge’ will dare to acquit the defendant.  For a while, it had seemed that Russia was limiting the severity of at least some of the sentences.  On the same day, for example, that  Filatov received a six-year sentence, fellow Ukrainian from occupied Yalta, Artem Gerasimov, received only a (huge) 400 thousand rouble fine, although the ‘prosecutor’ Oksana Chuchuyeva had demanded a six-and-a-half year sentence/

It now seems likely that the initial 400 thousand rouble fine was merely a delaying tactic to avoid having two believers given long prison sentences on the same day and, probably, to check international reaction to the first sentence.  That reaction was clearly not emphatic enough.  Gerasimov’s fine was appealed by the prosecutor, and that appeal was allowed by the Russian-controlled ‘High Court’ on 4 June.   In a closed hearing, Gerasimov’s fine was changed to a six-year sentence and he was taken into custody in court.

This suggests that Shabliy, and Viktor Stashevsky from Sevastopol who is now ‘on trial’, could also face very long sentences.

Most ominously, it means that, under Russian occupation, the number of victims of repression will continue increasing, although Russia is also breaching international law by applying its legislation on occupied territory.  Some Jehovah’s Witnesses have already left from mainland Ukraine, others may follow, however many will be unable to leave or, for whatever reason, not wish to.

When praying at home with family and friends, or even discussing the Bible, are labelled ‘extremist activities’, any believer can end up imprisoned.