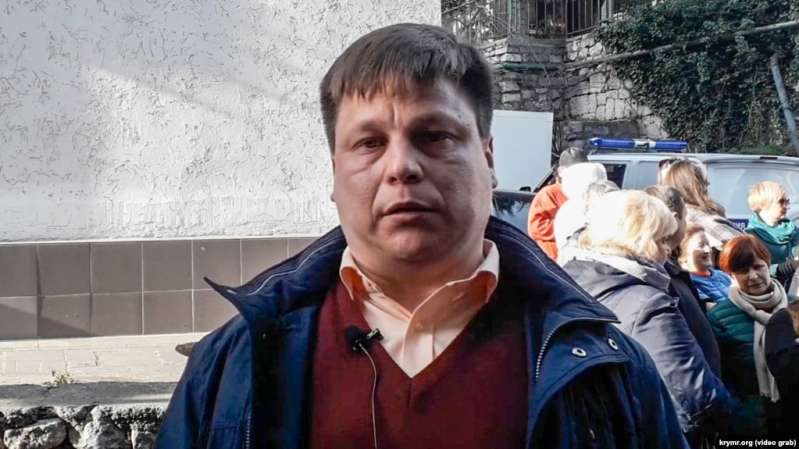 In a shocking escalation of repression in occupied Crimea, a Russian-controlled court has revoked the fine imposed upon Ukrainian Jehovah’s Witness Artem Gerasimov and sentenced him to six years’ imprisonment.  The 35-year-old was taken into custody in the courtroom.

It now seems likely that the initial 400 thousand rouble fine was merely a delaying tactic to avoid having two believers given long prison sentences on the same day.  On 5 March,  ‘judge’ Maria Yermakova, from the Dzhankoy District Court sentenced 47-year-old Serhiy Filatov to six years in a medium security prison, as well as other restrictions on his freedom even beyond that sentence.  It was claimed that praying at home, together with others, “undermined constitutional order and state security”.  The sentence was upheld by ‘judge’ Edward Belousov from the High Court on 26 May.

Gerasimov’s ‘trial’ on identical charges was very slightly ahead and the prosecutor, Oksana Chuchuyeva had already demanded a six-and-a-half year sentence in his case.  Then, also on 5 March, ‘judge’ Vladimir Romanenko from the Yalta City Court ‘only’ imposed the huge fine.  While it is just possible that it was Romanenko who balked at imprisoning a man purely for his faith, it is perhaps more likely that Russia wished to check the international reaction to Filatov’s sentence.  Believers had already been sentenced to similar terms of imprisonment in Russia, however Filatov was the first Ukrainian to receive a real sentence in Crimea.  Russia is in breach of the European Convention on Human Rights and its own Constitution through its persecution of the Jehovah’s Witnesses at home, but it is also flagrantly violating international law which expressly prohibits it from imposing its legislation on illegally occupied Crimea.

Gerasimov’s fine was appealed by the prosecutor, and it was that appeal which the ‘High Court’ on 4 June allowed.  The hearing was effectively behind closed doors, and around twenty people who had come to show Gerasimov support were forced to wait outside.

Gerasimov was arrested on 20 March 2019 in the second of at least four major armed ‘operations’ against Jehovah’s Witnesses in occupied Crimea.  Although the trial now underway appears to be only of Gerasimov, and he was the only person who was shown being arrested, several others were taken away for  interrogation, and 40-year-old Taras Kuzio was also reported to be facing charges.

All of these charges pertain to Russia’s extraordinary reversion to Soviet repression on 20 April 2017, when the Russian Supreme Court banned the Jehovah’s Witnesses, claiming them to be an ‘extremist organization’.  No proof is needed of ‘extremism’, only of being a believer, and that is hardly something that a Jehovah’s Witness will deny.  Over the last three years, several people have received long prison sentences and hundreds have faced criminal prosecution for their faith, with the standard charge being under Article 282.2 of Russia’s criminal code (‘involvement in the activities of an extremist organization’).

Gerasimov was charged with the more serious part 1 of this norm (‘’organizing such supposedly ‘extremist’ activities), with the prosecution claiming that holding religious services constituted such ‘organizing’.

Russia is using the ‘extremism’ label to try to conceal its blatant religious persecution.  On 20 March 2019, for example, the Russian state-controlled media claimed that “the FSB have broken up a Jehovah’s Witness cell”.  A video showed burly men in masks and military gear making their way into what was presumably Gerasimov’s home and demonstrating religious material, including the Bible, as though it were ‘evidence’.  Any forms of dehumanizing language and images are for a purpose, and here talking about ‘cells’ being broken, and showing a man with his hands bound behind his back were clearly aimed at ensuring that people did not ask legitimate questions about why people were facing arrest and imprisonment for peacefully practising their faith.

This second prison sentence in occupied Crimea is of immense concern, especially since Russia is clearly ramping up its repression.  Another believer, Viktor Stashevsky is now on trial  and on the day of Filatov’s appeal hearing, armed FSB and others burst into four homes in occupied Kerch.  Artem Shabliy, who is 29 and has two very small children, was arrested, and held in custody for two days.  Although he has now been released, he is facing the same shocking charges which Russia seems hell-bent on turning into real terms of imprisonment.