Donbas children deployed as weapons in Russia’s hybrid warfare against UkraineRussian-controlled ‘Donetsk republic’ creates ‘children’s army’ to instill ‘correct views’Russia caught lying to OSCE about ‘persecution’ of Russian-speakers in UkraineMost Ukrainians say their language is an important aspect of Ukraine’s independenceInvaders threaten to take children away if parents don’t send them to be indoctrinated ‘to love Russia’ “All the Buildings on our Street were Destroyed” (Rubizhne resident)“Do You Still Want This War?” Anti-War Activities in Russia, 3-9 July 2022Russia threatens deportation from Kherson & Zaporizhzhia oblasts for pro-Ukraine views and for ‘discrediting’ the invaders Russia begins propaganda of war against Ukraine at pre-school level Russia moves to eradicate Ukraine from schools in occupied Mariupol, Kherson and Zaporizhzhia“We’re not celebrating today” – digest of Russian protests (early June 2022)Mariupol in danger of cholera outbreak, but Russian invaders concentrate on removing signs in Ukrainian International experts issue stark warning of Russian genocide against Ukraine“Fight poverty, not Ukraine” – digest of Russian protestsProhibited remembrance of Crimean Tatar genocide and mounting terror in Russian occupied Crimea A resident of Mariupol is telling how she found civilians killed by a sniperRussian invaders destroy Ukrainian hospitals, plundering medical equipment and abducting medical staff Even in Russia, Putin’s ‘denazification’ claims prove no excuse for war against UkraineRussia uses terror and abduction in attempt to force schools to collaborate in occupied Melitopol 22 journalists killed since Russia began its total war against Ukraine
• Topics / Children’s rights 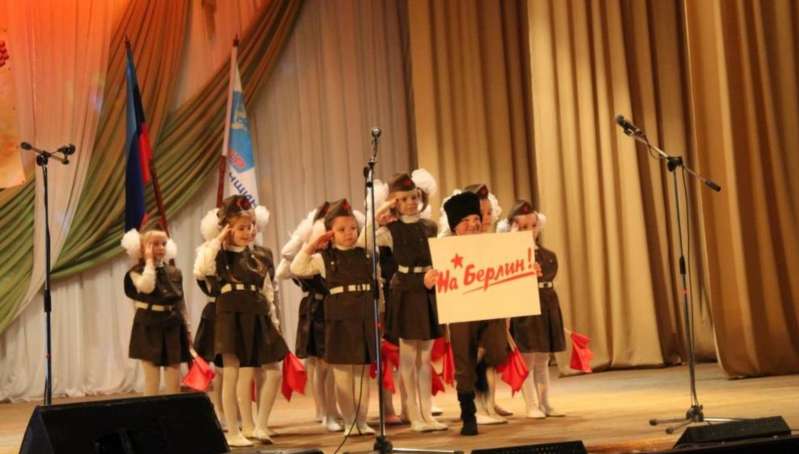 Russian has been declared the only ‘state language’ in the self-proclaimed ‘Luhansk people’s republic’ [LPR] which Moscow controls but has never recognized.  The exclusion of the Ukrainian language’s official status has been accompanied by moves to eliminate Ukrainian from the school curriculum.  All of this, together with similar developments in the so-called ‘Donetsk people’s republic’, make a mockery of any negotiations regarding reintegration of occupied Donbas into Ukraine.

Since the unrecognized ‘Donetsk republic’ announced that it was removing Ukrainian’s official language status back on 6 March this year, the only surprise is why it took LPR so long to do the same.  Leonid Pasechnik, the Russian-installed LPR leader, reported that he had signed ‘a law’ passed by the so-called ‘people’s council’, changing the so-called ‘LPR constitution’ [article 10].  It was claimed during the reported session which whipped the ‘law’ through both readings that it did not infringe people’s right to use and to receive education in other languages.  It is unclear why they even bothered to make such a pretence since on that same 3 June, the self-styled deputy education minister, Olga Zhdanova, announced that the ‘education ministry’ had excluded Ukrainian from the school curriculum.  She asserted that they had earlier carried out a sociological survey of the parents of schoolchildren about the need for this or that discipline, including the Ukrainian language, and had purportedly discovered the lack of demand for Ukrainian.  She is a little unclear about what is now available.  This appears to be the option of one academic hour a week, with this an optional subject, with no assessment.

It is worth remembering the civilian hostages whom the so-called ‘LPR ministry of state security’ has seized, tortured and held prisoner for lengthy periods after they expressed pro-Ukrainian views.  In conditions where pro-Ukrainian tweets or posts on social media can get you a 10-15-year ‘sentence’ for supposed ‘spying’ or even ‘treason’, it seems hard to imagine many parents insisting that their children continue studying Ukrainian.  Russia has used similar tactics to remove Ukrainian from schools in occupied Crimea.

A Luhansk blogger, calling herself Yana Viktorova, has given a very different account of the events leading up to the exclusion of Ukrainian from schools.  She reported on 29 May that there had long been rumours that “Ukrainian would be taken away”, but that these had reached a crescendo on parents’ social media chats during the last week of May.  The choice mentioned was whether to give up Ukrainian altogether or to have it as an optional subject, for an academic hour once a week.  In some schools parents were given until evening to decide; in others, they simply weren’t asked their opinion.

The author spoke with a grandmother who is effectively bringing up her grandchild since the parents are divorced and both have new families.  She wanted Ukrainian lessons to be kept, but was afraid to speak out, especially since she is in a vulnerable position, having no legal guardianship of the child.

Viktorova is aware of other cases where parents whose children are studying in specialized schools are told they can take their children elsewhere if they even try to hold out for Ukrainian classes.

Another grandmother of two schoolchildren (also identified under a pseudonym) told Donbas.Realii that she feared that children in Luhansk will simply not know their native language.  That means, among other things, that they will not be able to enter a Ukrainian university and will be doomed to receive an education in an unrecognized ‘republic’.

In both Crimea and Donbas, Russia claimed that Russian-speakers were ‘discriminated again’ and were even facing ‘genocide’.  In fact, Russian was widely spoken everywhere, without any discrimination, unlike Ukrainian, under open or effective Russian occupation.

Although the removal of Ukrainian from the curriculum is now being formalized, the process began long ago in most schools.  Back in early September 2019, Dmitry Durnev wrote that all Ukrainian schools and classes were now in the Russian language, after a transitional phase from 2014 to 2016.

Tatyana is now a former teacher of junior classes, and has left Donetsk, but she still insisted on total anonymity and voice distortion, as she does visit occupied territory. She says that they were able to finish the fourth grade still in Ukrainian, however after that, there was no choice, they simply had to go over to Russian.  Older teachers of Ukrainian Language and Literature in senior classes simply lost their jobs.  Other teachers of all subjects were given the option of retraining to teach in Russian. In 2015, they received textbooks with the syllabus now according to ‘School of Russia’  The only exception was Nature Studies, where instead of learning about nature in Russia, they study the nature in Donbas.  The one hour a week the children had of Ukrainian was divided in half between language and reading literature.  Tatyana mentioned that there were five hours of Russian language, but this, of course, is in addition to all the classes taking place in Russian.  An additional compulsory subject, entitled ‘civic awareness and spirituality of Donbas’ had been introduced (more details here).

The issue is not only the Ukrainian language, but essentially everything to do with Ukraine.  The so-called ‘republics’ are following Russia’s lead on intensive militarization and indoctrination, with children learning ‘patriotism’ towards a pseudo-republic that even Russia has not recognized, and essentially learning that Ukraine is the enemy.