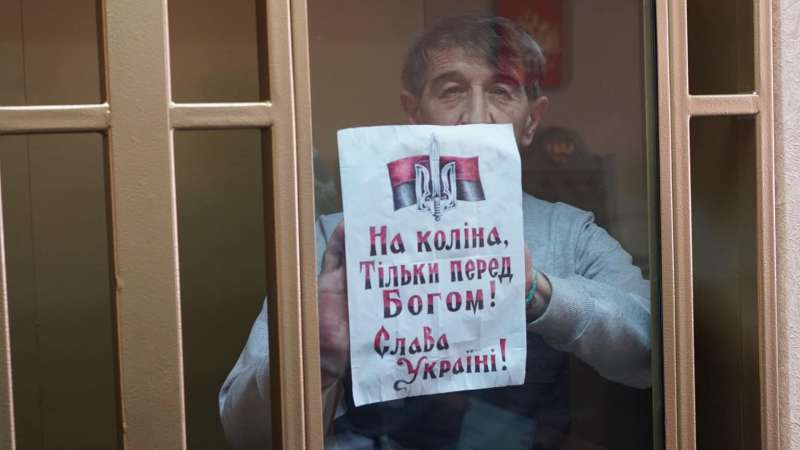 62-year-old Oleh Prykhodko was thrown out of his own ‘trial’ on 9 June.  The Ukrainian’s tirade against the FSB ‘prosecution witness’ was undoubtedly full of foul language, however there are strong grounds for taking his allegation against this key ‘witness’ very seriously.

Prykhodko was arrested on 9 October 2019 after two FSB officers, both former Ukrainian Security Service turncoats, supposedly ‘found’ explosives in a bucket in one of his garages.  It was when the first man, Vladimir Stetsyk, asserted that he had found explosives in a bucket that Prykhodko shouted at him, stating clearly, if in choice language, that Stetsyk had himself put the explosives there.

Nazim Sheykhmambet, one of Prykhodko’s lawyers, objected to his client’s removal at that critical point in the questioning, but was ignored by the court .  Both Stetsyk and the second officer Andrei Zemlyakov  continued their account of how they had, purportedly, found the explosives.  Zemlyakov said that before the search, he had proposed that Prykhodko hand in anything illegal but that the latter had said that he had nothing to hide.

Through questioning from the defence, it became clear that the officers had brought  two ‘members of the public’ (two young men) with them.  They claimed to have simply found them along the way, and to not know them, but it looks as though here, as in most cases, it would be hard to see the young men as independent witnesses.

Prykhodko immediately asserted that the officers had themselves brought the explosives and lodged a formal complaint.  Prykhodko had never concealed his pro-Ukrainian views and his opposition to Russian occupation, and had already faced administrative charges before and a search. This alone meant that, even if he had wanted to hold something illegal, the last place he should have kept it was in his own garage.  In addition, the officers seemed ‘to find’ the explosives absolutely immediately and later rejected Prykhodko’s suggestion that they search second premises. If they had seriously believed that he was keeping dangerous explosives, why would they have refused to look further?

All of this has already been seen in other politically-motivated trials. The FSB officers’ behaviour that can only be understood if they were not really looking for illegal substances was seen in the ‘search’ of the home of Ukrainian activist Volodymyr Balukh.  The illegal methods used to get a DNA sample had, in turn, been used to falsify evidence against Ukrainian political prisoners Volodymyr Dudka and Oleksiy Bessarabov.

There are multiple questions about this case, however the trial is taking place at the same Southern District Military Court in Rostov (Russia) that has convicted a large number of Ukrainian political prisoners on fabricated charges and there seem few grounds for optimism here.  Two ‘secret witnesses’ were due to appear on 9 June.  One did not turn up and the other was speaking, through technology distorting his voice, from occupied Crimea.  Due to the voice distortion, the witness could not be heard at all, and the questioning needed to be adjourned.  Presiding judge Alexei Abdulmazhitovich Magomadov did, however, side with the prosecution against the defence who objected to the ‘witnesses’ identity being kept a secret when no justification for this had been provided.  Virtually all Russia’s political trials of Ukrainians have involved two or more ‘secret witnesses’ whose testimony cannot be verified.

Russia’s claim that Prykhodko was planning to use the explosives to blow up the Saki city administration building seems to be based solely on the allegedly found explosives.  It was only after the defence were finally able to see the case material in January 2020 that a second, truly bizarre, charge emerged.  Prykhodko is accused of having planned to set fire to the Russian general consulate building in Lviv, Western Ukraine.

It is claimed that Prykhodkho decided to do this in October 2019 and that he found “an unidentified individual” in mainland Ukraine, phoned him and then corresponded by text messages.  It is, unfortunately, likely that the FSB know very well who the person he corresponded with is, and that it was Prykhodko who did not understand in time the real identity of a person who had contacted him, apparently from a Ukrainian number.  According to Legostov, there is nothing really incriminating in the text messages, just a lot of emotion.

Prykhodko has pronounced nationalist views which he was always very open – and presumably very emotional – in expressing.  During the first hearing, he confined himself to a few strong words on the charges against him, saying: “From 18 March 2014 through July 2019, governed by the human-hating communist ideology, collaborators and traitors who gave their oath to Ukraine, began creating Terror against Crimean Tatars and Ukrainian patriots who didn’t want to pray to the Kremlin god. They carried out searches of my home and that of my daughter.  However I did not take down the Ukrainian flag and the occupiers, together with their helpers, decided to try to make me into a fascist, terrorist and extremist. The scum who did this falsified all that was possible. Nobody wanted to defend me. That’s all, I reject the charges”.

The next hearing is scheduled for 18 June.