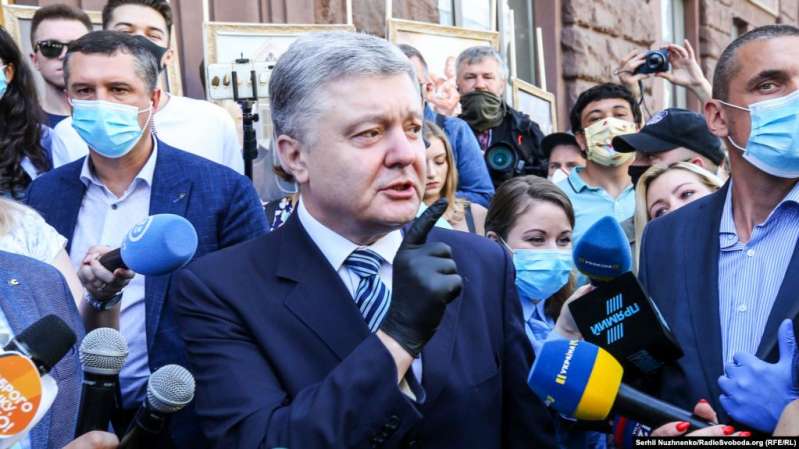 With at least 17 criminal investigations announced against former Ukrainian President Petro Poroshenko since Volodymyr Zelensky took office, it is no easy task to concentrate on any specific charges.  The stakes this time appear to be higher, since the Prosecutor General’s Office has announced that Poroshenko, currently an MP, could be remanded in custody.

While there is nothing, in principle, to link the attempt on 10 June to notify Poroshenko of criminal charges with Zelensky, Ukraine’s current President did make it clear less than a month ago that he envisaged a prison sentence for his predecessor.  He did so, furthermore, with respect to an evidently absurd and politically motivated criminal probe.

The State Bureau of Investigations [SBI] asserted on 10 June, and even produced a video to prove this, that prosecutors from the Prosecutor General’s Office [PGO] had, on the instructions of the Prosecutor General Iryna Venediktova, informed “an MP” that he was under suspicion of having, while Fifth President of Ukraine, exceeded his official powers.  The same notification, although with the visual effects, was posted on the PGO’s site.  The text states that the investigators have established that Poroshenko “issued an evidently criminal order” with this falling under Articles 27 § 4; 41 § 4 and 426-1 § 4 of Ukraine’s Criminal Code.”

It is stated that “SBI investigators are now deciding on the imposition of a preventive measure with regard to the suspect in the form of detention.”

In fact, one of Poroshenko’s lawyers, Ilya Novikov, denies that this official notification took place on Tuesday since, according to legislation, it is only Venediktova herself who can inform the ex-President of such charges.

The SBI investigators allege that Poroshenko’s ‘abuse of power’ in 2018 lay in his using “an evidently criminal order to get a military official, the head of the Foreign Intelligence Service to exceed his power and official duties”.  This, it seems, refers to the appointment of Serhiy Semochko as First Deputy Head of the Foreign Intelligence Service.

Suggestion that Poroshenko could be remanded in custody seems particularly startling since the ex-President knew of such likely charges back in December 2019.  The grounds for choosing detention (the likelihood that a person will flee, try to influence the investigation or witnesses, etc.) seem seriously out of date by now.

Back on 5 December 2019, the then Director of the State Bureau of Investigations, Ruslan Truba, reported that SBI was at the final stage in preparing to inform Poroshenko that he was under suspicion of illegally appointing and dismissing Semochko.

Poroshenko appointed Semochko to the above-mentioned post on 31 July 2018.  This was reportedly eight months after another First Deputy was appointed, upon the submission of the Head of the Foreign Intelligence Service.  The PGO considered that the Head had not lodged a submission for a second First Deputy Head and that such a post is, in any case, not envisaged by the normative documentation.  PGO asserts that Poroshenko’s actions in himself appointing Semechko led to serious consequences, with the extra person’s salary coming to over 1.5 million UAH.

Semochko had long worked in the Security Service [SBU], included in Crimea.  Following Russia’s invasion and annexation, he moved to Kyiv where he headed an SBU department.

On 2 October 2018, Bihus.info anti-corruption investigative journalists published an explosive report on Semochko and his family.  They alleged that he had real estate valued at 200 million UAH, that his wife and children had Russian passports and that he was implicated in a dodgy procurement scandal which had cost the lives of 200 patients suffering from kidney disease.

It is not quite clear whether Semochko’s dismissal is also part of the case against Poroshenko. Semochko was apparently dismissed, also by presidential decree, on 12 April 2019, however, by 7 November 2019, Bihus.info had reported that Semochko was likely to be reinstated because of a glaringly obvious infringement.  Most importantly, they suggested that this had all been deliberate, with Semochko having visited Poroshenko shortly before the ‘dismissal’.  The journalists reported on the legal suit brought by Semochko against the dismissal, which noted that, at the time of his dismissal, he had been on sick leave.  Dismissal at such a time is expressly prohibited by Ukraine’s labour legislation so Semochko had every chance of getting himself reinstated.

The timing here certainly does seem suspect.  Semochko had been seen at the entrance to Poroshenko’s Presidential Administration on 6 April, a Saturday.  On 8 April, Semochko got himself a medical certificate for two weeks’ sick leave and then on 12 April, Poroshenko signed the decree dismissing him.

This appears to be what the suspicion announced on 10 June is about, though the SBI and PGO have not left us short of other possibilities.

On 26 May, SBI accused Poroshenko of having brought 43 paintings into Ukraine without proper customs clearance.  Poroshenko was summoned for questioning, but did not turn up.  He instead put the pictures on display and presented what he claimed were the customs declarations for them.   This resulted in a much publicized and highly irregular raid by the SBI on the museum where the pictures were on display and their seizure on 29 May.   In one of the notifications on the SBI website on 10 May, a video is produced, accusing Poroshenko of hiding behind his political status and not appearing when summoned for interrogation.  The SBI video is clearly aimed at accusing Poroshenko of obstructing the legitimate work of the enforcement agencies. It could, of course, be said that the news readers quoted so often spoke of  Poroshenko having ‘as usual’ or having again not appeared for questioning because of the sheer number of summonses he appears to receive.

The above and some of the 15 other criminal investigations do perhaps need to be individually examined on their merits.  Many of them, however, were prompted by Andriy Portnov, who was deputy head of ex-President Viktor Yanukovych’s administration during Euromaidan and only returned to Ukraine on the eve of Zelensky’s inauguration.  The criminal investigation which he sought into Poroshenko’s supposed ‘treason’ over Russia’s attack on three Ukrainian naval boats and capture of the 24 crew members had seemed quite preposterous, yet SBI has since helped prop up Portnov’s parroting of the Kremlin’s narrative by carrying out ‘an investigation’.   In December 2019, it was reported that a criminal investigation had been launched against Poroshenko over the Minsk II Agreement in February 2015.  There are definitely reasons to be unhappy about that agreement, but it is absurd to charge Poroshenko with state treason’ over a political decision made at a time when Russia was waging a military offensive against Ukraine (more details here).

It is widely believed that Venediktova’s predecessor as Prosecutor General,  Ruslan Riaboshapka was dismissed early in March 2020 at least in part because of his refusal to sign an indictment against Poroshenko.  Since his dismissal, Riaboshapka has reiterated his view that the charges were “legal rubbish”, unlawful and without foundation. In the same interview, however, he said he thought it likely that Venediktova would sign the document that she had, in all likelihood co-authored while SBI Acting Director.

As mentioned, Zelensky made some very disturbing statements about Poroshenko and criminal investigations during his 20 May press conference.  He asserted that a sentence against his predecessor  was coming and cited what he called “yesterday’s scandal” as an example of why.  There had been no scandal, only another attempt to claim ‘treason’ by Poroshenko and claim dirt against former US Vice-President and current presidential candidate Joe Biden, using tapes which had been illicitly obtained but did not expose any unacceptable or illegal behaviour  (details here:  Criminal probe against Poroshenko regarding Biden tape discredits Zelensky and Ukraine ).

The fact that a criminal probe on that occasion was announced seems deeply disturbing.  So too are the sheer number of investigations against Poroshenko and associations with the charges that former President Viktor Yanukovych used to imprison his rival Yulia Tymoshenko and two members of her former government.

The allegations regarding Semochko’s appointment and dismissal may seem incriminating, but surely the same could be said of Zelensky’s renaming of the President’s Administration the ‘Office of the President’.  That, after all, was done to enable his choice of the Head of the Administration, Andriy Bohdan to hold a post which the Law on Lustration expressly prohibited him from occupying.