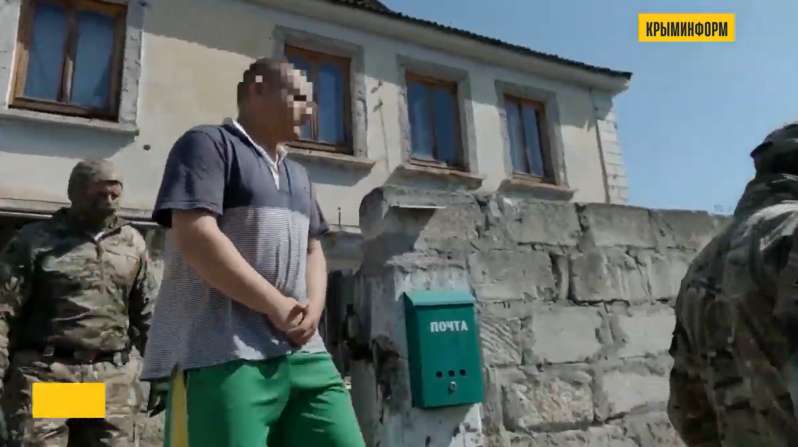 A young Crimean is in custody facing serious charges under Russia’s notorious ‘extremism’ and ‘terrorism’ legislation,  with the FSB having also reported the arrests of another five Crimeans whom it accuses of ‘calls to extremism’ and planning a terrorist act.  There are grounds for fearing this to be the latest FSB offensive against Crimeans whose ‘extremism’ probably consists of agreeing with all democratic countries that Crimea is Ukrainian territory.

The FSB reported on 10 June that it “had prevented an act of terrorism” in Simferopol and had arrested five people, identified only as “citizens of the Russian Federation”.  It claimed that the five were planning to use a homemade explosive device in one of the markets in Simferopol, “and also promoted on the Internet the ideology of terrorism and extremism”.  Grandiose claims are made about the weapons and homemade explosive devices allegedly removed, as well as “communications devices containing information about planned crimes and also contacts with members of radical Ukrainian formations fighting in the south-east of Ukraine”.

In the video which purportedly shows a search and arrest, you can hear an FSB officer reading what appears to be the ‘charge’, namely that “in the VKontakte social network he circulates material containing calls to violate territorial integrity”  The Crimean Human Rights Group assumes that this refers to social media posts calling for Crimea to be returned to Ukraine.  Since shortly after Russia’s invasion and annexation of Crimea, Russia began sentencing Crimeans and Russian citizens to up to five years’ imprisonment for what was titled ‘public calls to action aimed at violating Russia’s territorial integrity’ (Article 280.1).  What this, in practice, has entailed is calls for greater sanctions against Russia for occupying Crimea, etc.

Rather strangely, the FSB report suggests that criminal proceedings against the detained persons are now being instigated, with these under Articles 205 § 1 (planning a terrorist act) and 205.2 § 1 (public calls to carry out terrorist activities) of Russia’s criminal code.  The charges could carry up to 20 years’ imprisonment.

It is possible that the young man whose identity is at least known is one of the above-mentioned five people, however the charges appear to be slightly different.  20-year-old Andrei Kuliyevich is also charged under Article 205 §  1 (planning a terrorist act), but the second charge is under Article 280 § 1 (public calls to carry out extremist activities).  The young man is currently being held in a police holding centre with it near inevitable that he will be remanded in custody.

He is, fortunately, to be represented by Sergei Legostov, a lawyer involved in many politically motivated cases, including two in which the FSB also claimed to have prevented acts of terrorism.  Legostov has yet to speak with the young man himself, but says that he was living with his parents in Inkerman and was not currently employed.  The family have relatives in mainland Ukraine and the young man almost certainly does have pro-Ukrainian views.  A search was carried out of the family’s home, though Legostov says that only telephones and information storage devices were removed.

The five anonymous arrests have already been widely publicized in the Russian state and Russian-controlled media.  As always, such arrests serve the propaganda messages that 1) the FSB is vigilantly averting acts of terrorism and 2) that the threat comes from Ukrainians.  In this case, the latter are referred to as “Ukrainian radicals”.  In other cases, it has been claimed that the arrested Ukrainians were working for the Ukrainian Security Service or Ministry of Defence.

All of the cases have shared similar features: the lack of any convincing proof of actual terrorist plans and evidence of falsification.  Most, unfortunately, also include the targets being tortured into ‘confessing’ to the impugned crimes.  In all cases where the men have since been released, as well as in most where they have finally been given access to lawyers, they have confirmed that they gave whatever ‘testimony’ was demanded to stop horrific forms of torture.

See also: 14 year sentences for Russia to present Ukraine as the enemy in occupied Crimea