No money for medics in occupied Crimea & Russia, while 15 billion spent to rubberstamp Putin’s life presidency 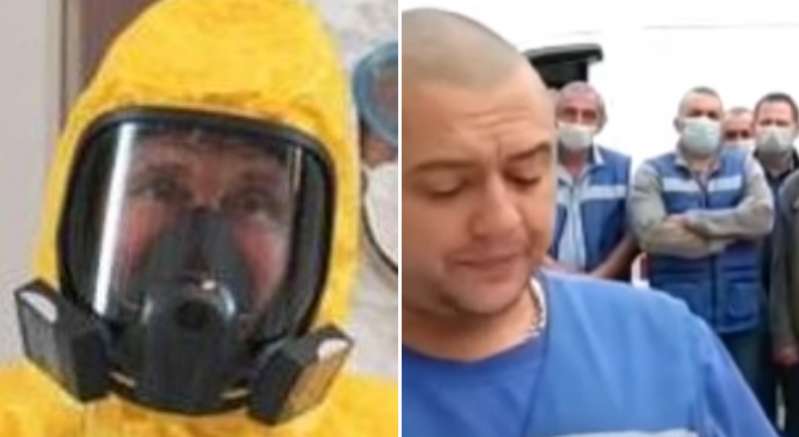 According to the Alliance of Doctors, an independent Russian trade union, Moscow has found 15 billion roubles for the so-called ‘referendum’ on amendments to the Constitution aimed at letting Vladimir Putin rule for at least another 10 years.  This is while in both Russia and occupied Crimea, medical staff on the frontline in dealing with the pandemic are not receiving promised supplementary payments to extremely meagre salaries.  Anastasia Vasilyeva, head of the Alliance, told Krym.Realii that in Crimea, medics are not only receiving the extra money, but are also not being provided with enough protective masks and antiseptics.  The same is almost certainly true of Crimean medical students who are being sent to do ‘practice’ to southern Russia.

Krym.Realii also spoke with a nurse from a Crimean hospital who, typically, only agreed to give an interview on condition of total anonymity and concealment of her appearance.  Her account corresponds to that given by the Alliance.  She and her colleagues have not received the promised supplementary payments, and that is by no means the only problem.   The staff are given no information about whether patients have tested positive for coronavirus.  When a person is in hospital with suspected Covid-19, a test is taken but only the head doctor learns the results.  There was a man who was in intensive care for seven days before being moved to an observation ward where he died.  His death was certainly not recorded as being from coronavirus.

The nurse notes the stark difference between the hype about heroic medics and the reality.  They put up photos of this or that nurse on a billboard, yet treat that nurse like cattle, she says, adding that in Russia they’re probably used to living like that, where it’s all for appearance, and the reality is that you’re treated worse than animals.

In at least two video addresses, Simferopol ambulance staff complained of not receiving the promised supplementary payments, despite being at particular risk.  In the second video, the doctor reading the address speaks of them having lost any faith in their management after they saw another video on social media where their protest was treated “as destabilizing provocation”.  The Alliance of Doctors does stress that medics should check who is receiving supplementary payments for high-risk work, and notes that it is the head doctor who determines which staff get extra money and which don’t.

Crimean medics and their relatives have written to the Alliance, complaining that they are not receiving personal protective equipment.  Judging by the experience of one Simferopol medic’s daughter, the reaction is likely to be attack, with the person accused of lying.  She told the Alliance that volunteers had brought masks the day before and that her father had been thrilled, saying that he had been using the same, single-use mask, which he had bought with his own money, for the past two weeks.

“He was delighted with the antiseptics as well. It’s horrific what is going on, total lies everywhere.”

All the failings are, of course, denied by the occupation authorities who claim that medical staff working with Covid-19 patients receive both ‘federal’ supplements and regional.  As well as the above cases, however, there are others from Crimea where staff are openly showing their faces, which they would be most unlikely to do if this was not true.  It was, after all, clear from the beginning that neither in occupied Crimea, nor in Russia, was it safe to tell the truth about the pandemic.

Vasilyeva and the Doctors’ Alliance have themselves come under attack. On 2 April, she was first very violently detained’, while travelling with colleagues to a hospital in the Novgorod oblast to provide urgently needed protective gear for the medical staff.  One of her colleagues, Ivan Konovalov explained to RFI that the police initially accused her of violating the rules on self-isolation and demanded that she write an explanation.  She refused to do so, and although she had the right to not do so, the enforcement officers decided to call this ‘refusing to obey the legitimate demands of a police officer’.  She was held in detention overnight, deprived of a lawyer, contact with others, food or drink, and then fined 800 roubles by a court

Vasilyeva has been extremely critical of the Russian authorities’ muffling of the real scale of coronavirus infections in Russia and it was she who initiated an appeal for donations to buy the necessary protective gear for hospital staff.  She had already been summoned for interrogation to the Investigative Committee over this, and the events on 2 April were clearly aimed against her and intended to frighten her into silence.  Fortunately, they failed.

On 31 March Russia’s State Duma adopted a new bill, which Putin signed into law the following day.  This adds a new article to the criminal court - Article 207.1 or ‘Public circulation of knowingly false information about circumstances posing a threat to life and safety’.  The bill has, as predicted, been applied against those doctors, journalists, civic activists and others who provide information deviating from that in official reports.  There are, clearly, strong grounds for doubting such official messages, but the fact that it is official will be treated as sufficient to get people convicted.  A report just published by the Agora Human Rights Group, also covers other administrative and criminal norms used to prosecute people for what is claimed to be knowingly false information.  Fines of well over a billion roubles have already been imposed and a large number of criminal proceedings initiated.

The Kremlin was forced to postpone both Putin’s ‘referendum’ and the Victory Day parade in Moscow, with its huge military display.  In May, however, with his popularity plummeting beyond even the Kremlin’s skills at concealment, he decided to schedule the so-called referendum on amendments to the Constitution on 22 June and military parade two days later.  It is very likely that both events will result in a huge rise in the number of infections and, probably, deaths.  Russian propaganda channels, and the enforcement bodies in both Crimea and Russia will, however, be ready with measures to ensure that a substantial percentage of the population will think long and hard about whether they dare tell the truth.