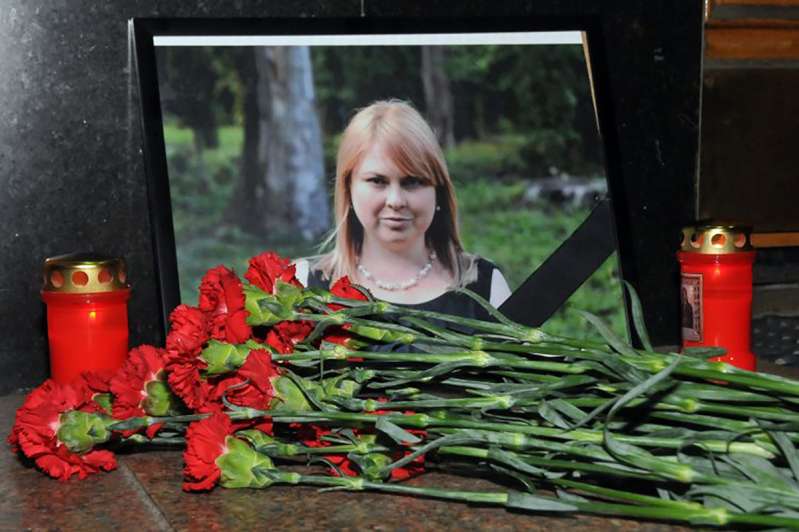 Vladislav Manher, head of the Kherson Regional Council, has been remanded in custody without bail on charges linked with the fatal attack on Kherson activist Kateryna Handziuk.   The proceedings lasted a whole week, and involved the SBU [Security Service] bringing the politician to Kyiv by force from the hospital ward which he was admitted to after failing to appear at the scheduled court hearing.  An investigation has now been announced into the actions of doctors from the Kherson Regional Cardiology Clinic who claimed that Manher was too ill to be moved, as well as the actions of those individuals who tried to prevent the police and prosecutor from entering the clinic.

Manher is suspected of having commissioned the savage acid attack on Handziuk at the end of July 2018, from which she died on 4 November that year.  Handziuk was Aide to the Mayor of Kherson and a well-known civic activist, who was fearless in exposing police and local authority corruption.   Although changes were initially laid against Manher in February 2019, he remained in his influential post and was allowed bail.  After the charges were, controversially, reduced (from commissioning Handziuk’s murder to commissioning grave bodily injuries), the amount of bail he paid was even reduced.

The prosecution, however, applied to the court for Manher’s detention, accusing him of threatening witnesses in the case.  Complaints of this had arisen after Manher and his lawyers were able to read the material in the case.

The court hearing was due to begin at the Pechersky District Court on 12 June 2020, however Manher did not turn up.  It was learned that he had been admitted to the Kherson Regional Cardiology Clinic and was supposedly to ill to leave.  The problem was, however, that Manher had been admitted to the very same ward a year earlier with this also used to claim he could not be present in court.

Prosecutor Andriy Synyuk was unconvinced.  In commentary on 15 June, he noted that the same arguments had been used in the Spring of 2019, with the same medical unit providing him with a medical certificate. Synyuk added that in July 2019, the head doctor of the clinic had received an award from the Kherson Regional Council, with this entailing material incentive.  He announced that they would be taking measures to check the diagnosis provided by the doctors on this occasion, including by sending independent doctors from other regions.  He warned that, if the prosecution’s suspicions were confirmed, that the doctors involved could face criminal charges.

The court issued an order for Manher to be forcibly brought to Kyiv, with this carried out by the SBU on 16 June.  Manher now has five lawyers, and numerous measures were taken over the following days, including attempts to get the judge in the hearings, Tetyana Ilyeva removed.

The attempts eventually failed and late on 18 June, Ilyeva ordered that Manher be placed in detention until 28 July, with no possibility of bail.

Synyuk announced on 11 June that the investigation with respect to Manher and Oleksiy Levin, who was extradited to Ukraine from Bulgaria in January this year had been extended to 29 July.  This, he said, was due to new circumstances coming to light.

This certainly seems very positive and there does again appear to be movement in the case.  As reported, there was considerable concern on 27 April 2020 when the Prosecutor General’s Office and Security Service [SBU] announced ‘completion’ of their investigation three months early.  Since there could be no good reason for terminating an investigation early, especially when one of the main suspects was refusing to give any testimony,  Handziuk’s father and friends were not alone in fearing that the case against Manher and Levin was being rushed through so that it would collapse in court.

It is not clear what has changed, however the investigation has been extended and both key suspects are in detention.

It was essentially thanks to Handziuk’s father, friends and fellow activists that an innocent man was not falsely charged  over the acid attack, and that progress was made in identifying not only the real perpetrators, but also those believed to have commissioned the horrific attack.  On 6 June, 2019, Serhiy Torbin was convicted of having coordinated the attack and jailed for 6.5 years.  Mykola Hrabchuk got 6 years for having carried out the attack.  Volodymyr Vasyanovych and Vyacheslav Vyshnevsky were jailed for 4 years, Viktor Horbunov – for 3 over their roles in the crime.  The very significant reduction in charges against them, allegedly because they agreed to cooperate with the investigators, resulted in similarly reduced charges against Manher and Levin.  Manher continues to hold a very high post in the Kherson oblast, one normally carrying a considerable amount of influence.