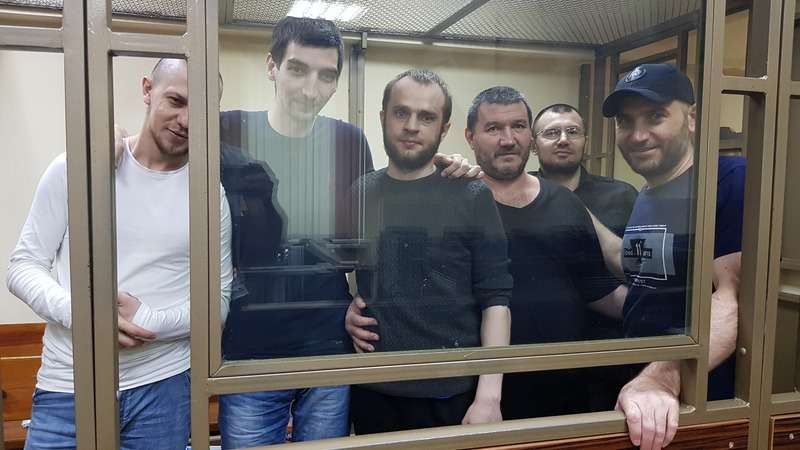 Russia’s Military Court of Appeal has upheld horrific sentences against Crimean Tatar human rights activist Emir-Usein Kuku and five other Ukrainian Muslims despite the lack of any crime and a record-breaking number of falsifications.  The gross flaws in the case have been spelled out by, among others, Amnesty International and Human Rights Watch, and noted by the EU diplomats who attended the first appeal hearing, yet the ‘judges’ did not make even a symbolic reduction in the sentences.

The six recognized Ukrainian political prisoners and Amnesty International prisoners of conscience have been imprisoned since 11 February 2016, with their arrests marked by particularly shocking brutality and cynicism.  Not only were they never accused of any recognizable crime , but all were effectively targeted for their steadfast adherence to principles.  This was in marked contrast to the Ukrainian turncoat, Alexander Kompaneitsev, who in his new capacity as FSB officer, played an especially malignant role in persecuting the men.

Kuku had responded to the ever-increasing number of forced disappearances, armed searches and arrests under Russian occupation by becoming active in the Crimean Contact Group for Human Rights.  He had already faced persecution for this, including a likely attempted abduction which only turned into an ‘FSB search’ carried out by Kompaneitsev after passers-by came to Kuku’s rescue.  While international NGO’s had been slow to react to the previous case involving persecution of Crimean Muslims, the fact that Kuku had already faced harassment and persecution, without any mention of Hizb ut-Tahrir, made it clear that the charges against him were politically motivated.  The same, however, is true of all six men.  Dzepparov was almost certainly arrested because he rejected Kompaneitsev’s attempts to get him to collaborate with the FSB, and Bekirov was directly told that Kompaneitsev would arrest Alimov, who is his nephew, if he did not ‘cooperate’.  It is likely that Aliev was targeted for his religious independence and civic position.  The same is probably true of Siruk, however in his case there could well be a further reason.  Siruk and his wife are ethnic Ukrainian converts to Islam, and it is quite likely that his arrest was intended as a threat to others not to convert.

Initially, only Aliev was designated the role of ‘organizer’ of a supposed ‘Hizb ut-Tahrir cell’, under Article 205.5 § 1 of Russia’s criminal code, with this carrying a sentence of up to life imprisonment.  The other men are charged with ‘involvement’ under Article 205.5 § 2 with the sentences still appalling, but lower. Then suddenly in August 2018, after the ‘trial’ had already begun in Rostov (Russia), presiding judge Nikolai Yurevich Vasilchuk (presumably with the backing of judges Valery Sergeevich Opanasenko and Stanislav Vladimirovich Zhidkov) returned the case to the prosecutor, suggesting that Bekirov also be charged as ‘organizer’.  This was a shocking abuse of the role of judges who had thus doubled up as prosecutor.  In fact, there is reason to believe that other irregularities in the case which the defendants and their lawyers had drawn attention to may have prompted the decision to abort the first attempt at a ‘trial’ which, because of Kuku, was attracting a lot of attention.

By then, all six men had been charged additionally with ‘‘preparing for violent seizure of power by an organized group according to a prior conspiracy’ (Article 278).  Memorial HRC has pointed out on many occasions that Russia uses this extra charge as a weapon against men who refuse to ‘cooperate’ (by agreeing to give false testimony, admit to the charges, etc).  Not one of the men charged in occupied Crimea has agreed to ‘cooperate’, and the country which invaded Ukrainian Crimea in 2014 is now effectively always bringing these surreal charges against Ukrainian Muslims.

Memorial has studied the ‘indictment’ and evidence and concluded that “not only did the defendants not engage in terrorist activities, but they did not carry out any publicly dangerous activities at all”.  In all such cases, Russia uses ‘secret witnesses’ and FSB-loyal ‘experts’ who will find ‘proof’ of involvement in Hizb ut-Tahrir in any text demanded of them.  In this case, they claimed to find it in a recorded conversation “in the kitchen” where the men were discussing the situation in Russia, Ukraine, the fate of Crimea, the place of Islam in both countries and various religious postulates.

It was on the basis of this that on 12 November 2019, ‘judges’ Roman Viktorovich Saprunov; Dmitry Viktorovich Merkulov and Roman Vladimirovich Podolsky (from the Southern District Military Court in Rostov) passed the six guilty verdicts required of them.  These were, on 25 June 2020, upheld by Oleg Aleksandrovich Yegorov; Aleksander Aleksandrovich Mordovin and Anatoly Valentinovich Solin.  It should be stressed that all of these individuals, together with the prosecutors and others implicated in the case, were fully aware that the men had never committed any crime at all. To varying degrees, all took part in falsifying evidence or turning a blind eye to such falsification.

30-year-old Vadim Siruk who has never seen his younger daughter, was sentenced to 12 years

All of the sentences involve ‘maximum security prison colonies’ where the conditions are exceptionally bad.  It is also certain that Russia will continue to flout a clear directive from the European Court of Human Rights and will imprison the men in Russia, thousands of kilometres from their families and home.