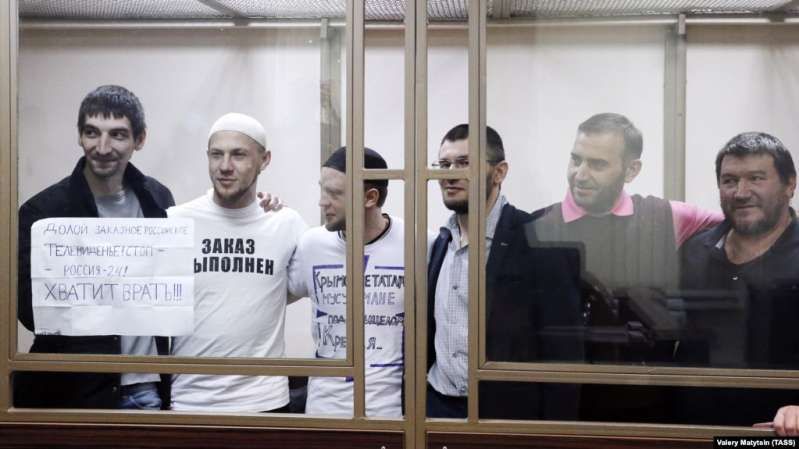 Human Rights Watch and Amnesty International issued a joint letter to Russia’s Prosecutor General on 22 June, demanding the release of Crimean Tatar human rights activist Emir-Usein Kuku and five other Ukrainian prisoners of conscience.  Their concerns about this appalling case were clearly shared by representatives of the European Union and Dutch Embassy who were also present at the court in Moscow.  It is likely that such international attention forced the court to at least pretend to give the appeal due consideration, however the rejection of all legitimate applications from the defence leave little scope for optimism about the ultimate decision.

The defence had, for example, asked for crucial testimony to be read out where a supposedly key prosecution witness stated clearly that he had not taken part in any investigative activities and that the signatures which were claimed to be his were falsified.   The lawyer representing Arsen Dzhepparov had asked the court to examine an expert analysis showing that the only ‘evidence’ used to justify the arrest of his client was, in fact, a montage of different pieces of video footage. This was clearly of immense relevance, but was rejected by the three judges from the Military Court of Appeal: Oleg Aleksandrovich Yegorov; Aleksander Aleksandrovich Mordovin and Anatoly Valentinovich Solin.   The judges also rejected the application from defendant Muslim Aliev to be able to question the supposed ‘secret witness’ since he had been prevented from doing so during the trial, and the first-instance court (the Southern District Military Court) had not provided an assessment of this alleged testimony in the sentences.  It has become standard for the judges of this court to obstruct defendants seeking to demonstrate that the so-called ‘secret witnesses’ do not, in fact, know the men and are lying. Russia is using ‘secret witnesses’ in all political trials, although no proof has ever been provided that the men would be in danger if they openly gave testimony.  There are strong grounds for believing that such secret witnesses are either FSB operatives or are men who have been threatened with imprisonment or similar if they do not provide false testimony.   Unsurprisingly, the attempt to have the judges removed due to legitimate concerns about their impartiality was also rejected.

The hearing took place with bad acoustics from three different locations: the court; the SIZO or remand prison in Rostov (Russia) where the men are held prisoner and defence lawyers, speaking from a military court in occupied Crimea.   For no good reason, the court also rejected the application to allow the men’s families and the press to be present in Crimea.

There are plenty of illegitimate reasons why Russia would want this case kept away from public view.  As well as the above-mentioned and countless other violations of the men’s right to a fair trial, there is also the lack of any recognizable crime, as HRW and AI pointed out in their joint letter.

All six men were accused solely of ‘involvement’ in Hizb ut-Tahrir, an organization which Russia has called ‘terrorist’, although it is not known to have committed any acts of terrorism anywhere in the world and is legal in Ukraine (and most other countries).  The rights watchdogs do not mention one other telling detail which is that Russia is literally the only country in the world to have declared Hizb ut-Tahrir ‘terrorist’.  It is certainly impossible not to agree with the internaitonal rights watchdoogs that these are “groundless terror-related charges” in a case “which exemplifies the persecution of human rights defenders and other activists in Crimea.”

Despite a profoundly flawed ‘trial’,  on 12 November 2019, ‘judges’ Roman Viktorovich Saprunov; Dmitry Viktorovich Merkulov and Roman Vladimirovich Podolsky convicted all six men of either ‘organizing a Hizb ut-Tahrir cell’ (under Article 205.5 § 1 of Russia’s criminal code) or of ‘involvement in such a cell’ (Article 205.5 § 2).  Why Muslim Aliev and Inver Bekirov should have faced the harsher ‘organizer’ charge remains quite unclear, but the sentences were shockingly high (19 and 18 years, respectively).  The other four men were charged with ‘involvement’.   Human rights activist Emir-Usein Kuku and Vadim Siruk (an ethnic Ukrainian convert to Islam who may have been targeted so as to claim that this was not persecution of Crimean Tatars) were both sentenced to 12 years’ imprisonment; Refat Alimov to eight years and Arsen Dzhepparov to seven years.  All of these sentences, It should be stressed, are in maximum security prison colonies where the conditions are especially bad.

HRW and AI noted that all six men had also been accused of conspiring to seize power by violent means (Article 278), and add that “no reliable evidence was presented during their trial that any of them has been involved in any internationally recognizable crimes.”

“The FSB investigator acknowledged during the hearing that the FSB does not have any evidence that Kuku and his co-defendants planned any violent acts or have any links to Hizb ut-Tahrir. The investigation has claimed that Enver Bekirov and Muslim Aliev led a Hizb ut-Tahrir cell in which their four co-defendants allegedly participated and that both men were reporting to “a higher authority”. However, the FSB investigator acknowledged in court that the state could not establish who that "higher authority" is, how the defendants allegedly got instructions, how and when they communicated, and the like. Likewise, when asked in court, the investigator acknowledged that they could not identify or document a concrete plan by the defendants to commit violent acts.”

While Ukrainian human rights organizations and the renowned Russian Memorial Human Rights Centre had long pointed to the flawed nature of the first ‘Hizb ut-Tahrir case’, it was this second case, and the targeting of Emir-Usein Kuku that drew much needed international attention.  As the authors of the joint letter point out, Kuku had long faced harassment and persecution for his human rights activities, as member of the Crimean Contact Group for Human Rights, and it was clear that the new supposed ‘terrorism’ charges were simply an escalation in that persecution.  Amnesty International considers all six men to be prisoners of conscience and all have also been recognized by Memorial HRC as political prisoners.

The hearing is to continue on 25 June.