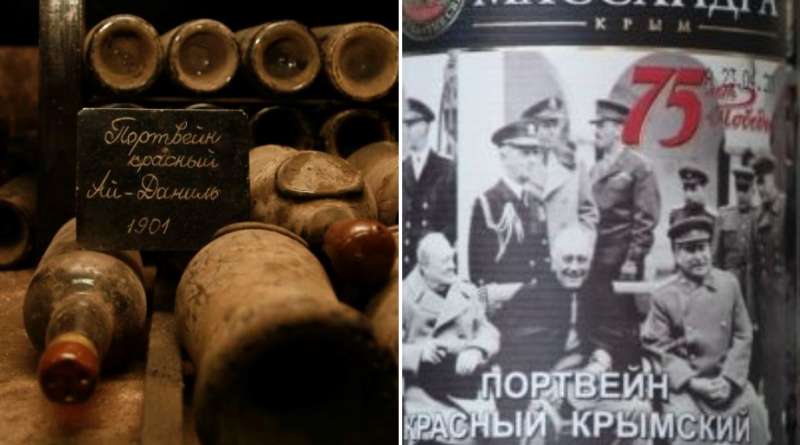 Russia is planning to ‘privatize’ the renowned Massandra Winery in occupied Crimea, with the essentially priceless Ukrainian wine cellars and vineyards  likely to be sold for a pittance to one of the Russian oligarchs close to Russian President Vladimir Putin.  Political analyst Yevhenia Horyunova notes that a winery that even the Nazis did not touch and that survived the anti-alcohol measures under Soviet leader Mikhail Gorbachev, is now to be plundered by the Russian occupiers.  Nor is it the first since Russia’s invasion and annexation in 2014.

Massandra dates back to Tsarist times, having been created by Prince Lev Golitsyn in 1894.  First nationalized after 1917, the winery always had some degree of state protection.  According to Mykola Boiko, who was director of Massandra for 29 years until 2015, and is now growing wine in mainland Ukraine, there were always businessmen rearing to buy the winery, but until Russian occupation, no political leader was willing to agree to this.  In 2009, to ensure that the winery remained intact, Ukraine’s President Viktor Yushchenko formalized Massandra’s national status and full state ownership.

This scheme has already been used to enable oligarchs to buy up other wineries, including the renowned ‘Novy Svet’, which also dates back to the Tsarist empire. It is not at all safe to tell the truth in occupied Crimea, and the Crimean blogger who reported at the beginning of June 2020 that the winemaking industry in Crimea is already under oligarch control was, for safety, writing under the pseudonym Andrei Pokrovsky.  He believes that the Russian oligarchs interested in plundering Crimea’s winemaking industry are mainly attracted by the prestige and the aristocratic chic it gives them.  That being said, they are still being offered hugely lucrative enterprises for virtually symbolic prices.

Dmytro Boiko has called the price cited for Massandra of 627 million roubles (9 million USD) absurdly low for the four thousand hectares of vineyards, as well as wine cellars which, in 1998, were recorded in the Guinness Book of Records.  According to Boiko, in the first decade of the 21st  century, the vineyards of Massandra alone were valued at 6,4 billion euros.

Price is obviously not the main issue here, however, and indeed Krym.Realii journalists were told by wine steward Dmytro Sidorenko that the winery is essentially priceless.  You can’t put a price tag on the Hermitage, for example, and Massandra is also a site of world heritage.

Until Russia’s invasion and the sanctions imposed by both the EU and the USA, Massandra wines were sold at Sotheby’s, and had won around 250 gold medals.  The cellars have now doubtless been plundered, but did hold over a million bottles of wine.

The ‘Novy Svet’ winery was sold in December 2017 to a St. Petersbug company ‘Southern Project’, which is part of the bank ‘Rossiya’.  Pokrovsky reports that the 1.5 billion roubles paid was far too low giving the huge vineyards and renowned champagne producer.  Massandra is now to be plundered in the same manner, with German Gref, now president of Sberbank, seen as the favourite of several oligarchs named as likely beneficiaries.

Since any such ‘purchases’, carried out by an occupying regime, are illegal, there is no reason to think that the current sanctions will be eased and should indeed be broadened.

For the moment, aside from propaganda stunts such as the visit to Massandra in 2015 by former Italian Prime Minister Silvio Berlusconi and his crony Putin, all trade with democratic countries and participation in international wine competitions is blocked for Massandra and Novy Svet.

China has proven unperturbed by such sanctions and has, reportedly, already struck deals with Massandra.  Without any particularly tradition for wine-drinking, Chinese drinkers may not notice, but Boiko has been told by a friend that the quality of the wine produced has seriously deteriorated.

The long-term price to pay for this devastation of Massandra may not worry Putin.  For now, the factory is taking part in propaganda efforts such as the issue of a limited series to mark the 75th anniversary of victory in the Second World War. Under Putin, mass murder Joseph Stalin has been ‘rehabilitated’, his victims forgotten, and the wine label typically includes an image of Stalin.