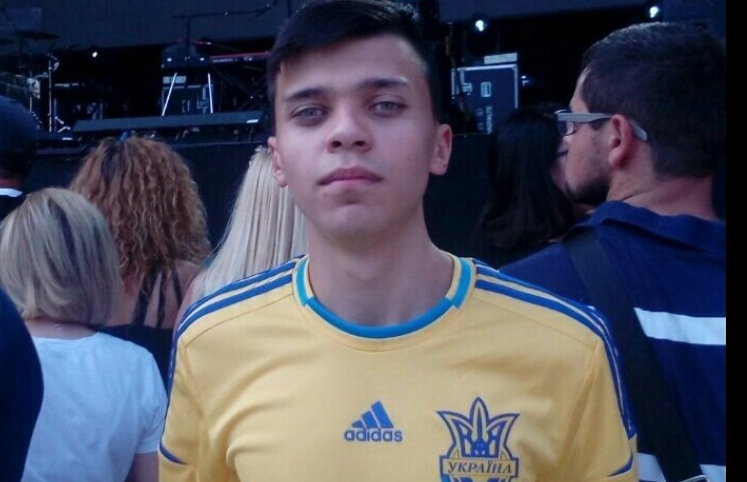 20-year-old Bohdan Maksymenko has been imprisoned by militants from the self-proclaimed ‘Donetsk people’s republic’ [DPR] for two and a half months, almost certainly for his pro-Ukrainian views that he expressed openly on social media.  The young man has a congenital heart defect and there are grave concerns for his state of health without medication and in the custody of militants who are notorious for torturing hostages. .

Maksymenko’s Facebook page, unfortunately, brims with reasons why the Russian-controlled militants would have targeted the young ‘Shakhtar’ football fan.  He writes in Ukrainian, including his own songs, dreams of his native Donetsk returning to peaceful life as part of his beloved Ukraine and even posted a photo of himself holding a Ukrainian flag.  No more was needed for militants to seize and torture two other football fans – Vlad Ovcharenko and Artem Akhmerov, and many other Ukrainians in occupied Donbas.

Maksymenko was born and has lived in Donetsk all his life.  The family remained in 2014 for want of any possibility of leaving, with Maksymenko finishing school and for a while studying in a local institute.  He has been working freelance since he was 17 and was hoping to take the entry exams and enter a Ukrainian university.

The young man’s last poignant post is from 11 March.  He writes (in Ukrainian) that: “It is hard to really believe that Donetsk will never be as it once was. And only the quiet, weak flame of hope and dream of returning flicker on. Only the song of a Patriot resonates through the Donbas steppes, and we wait, as there are things for the sake of which you can endure it all, after all, we are Ukrainians and there is our great Homeland, our Ukraine.”

The so-called ‘DPR ministry of state security’ arrived at the flat Maksymenko shares with his mother on 10 April and carried out a search.  They took his computer away, and Maksymenko himself.  It was only on 13 May that the family were told that he had been  ‘arrested’ for 30 days on suspicion of ‘extremist activities’, under the militants’ unrecognized ‘administrative legislation’.

Two and a half months later, Maksymenko remains imprisoned, with the militants having reportedly brought three ‘criminal charges’, although they have not divulged what these are.  According to the young man’s godmother, Natalya Kazyonnova, it was only on 22 June that relatives were at least able to get a parcel with medication accepted at the SIZO [remand prison].  They know nothing about his state of health, and it can only be hoped that the militants have understood that Maksymenko’s heart defect mean that their customary torture methods would likely prove fatal.

The family have themselves had no personal contact with Bohdan, nor has the so-called ‘investigator’ informed them what the young man is accused of.  They have already reached out to all international bodies and the Ombudsperson’s Representative in Donbas, and are now hoping that publicity can help. Maksymenko’s health condition makes it imperative that he is placed on the exchange list, however there seems little movement at present on organizing any exchange.

Since it is not only in Ukraine that people jump to conclusions about people who remained in occupied Donbas, Maksymenko’s godmother stresses that there were objective reasons why the family could not leave.  Bohdan’s only ‘crime’ was to openly and passionately care about his country.