French MPs paid from Russian coffers for Crimea propaganda trip?French Collaborators Kiss Monument to Russian Invaders of CrimeaNo surprises as Trump says he could recognize Crimea as ’Russian’ & lift sanctionsA British Foreign Secretary who excuses Russia’s invasion of Crimea?Kremlin’s Donbas proxies congratulate UK for ’doing what they did’ & voting for BrexitBrexit a gift to Putin, the far right & Trump, a blow to democracyEx-Mayor of London Boris Johnson blames Russia’s annexation of Crimea on the EUWhat European Values if Dutch Referendum Result Stands?Appeal by the leaders of Ukrainian national communities to the Dutch populationFormer Soviet political prisoners call on Holland to say yes to Ukraine’s European futurePlaying with fear and ignoranceHow a democratic tool became a threat to democracyUkrainian Jewish leaders appeal to Holland: Give our country the chance to break with the pastDutch referendum puts Ukraine in spotlightDead souls and infants ‘voted’ in Russia’s sham ‘referendums’ on annexing Ukrainian territoryNew armed searches and arrests in Russian-occupied Crimea for reading the Bible Russia confirms plans to annex occupied parts of Zaporizhzhia and Kherson oblasts“Do You Still Want This War?” Anti-War Activities in Russia, 3-9 July 2022Crimean Tatar sentenced to 19 years on "sheer fantasy" charges Former HR Ombudsman Lyudmyla Denisova on her dismissal, 4 years of work, Ukrainians in occupied areas
• Topics / Politics and human rights
• Topics / Human Rights Abuses in Russian-occupied Crimea 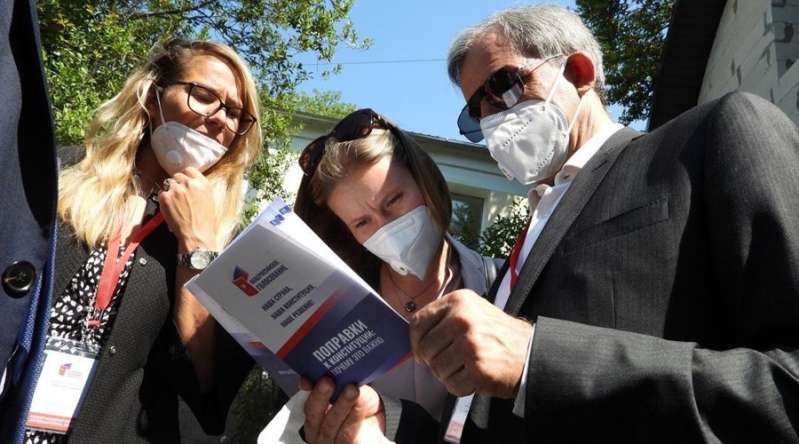 The European Parliament has been quick to stress that Thierry Mariani and four other French MEPs from Marine Le Pen’s far-right National Rally party visiting Russian-occupied Crimea are there as ‘private individuals’.  That is not, however, the way Russia and its state propaganda machine are presenting the politicians, and the European Endowment for Democracy should seriously consider removing Mariani from his position on the board of this EU-created body.

Far-right European politicians, including Mariani, have been used by Russia since March 2014 to rubberstamp its annexation and ongoing occupation of Crimea.  While the Kremlin tried to push a narrative about a supposed ‘far-right junta’ in Kyiv, it was lavishly funding French and other far-right politicians  to praise any pseudo electoral stunts as models of democracy.  Mariani, in particular, has openly acted as a mouthpiece for Russia with respect to Crimea.  During one of the many Russian media interviews that were the real purpose of the ‘delegation’, Mariani praised the Russian constitutional amendments that the so-called ‘referendum’ has been programmed to ‘overwhelmingly support’.  He asserted that these would “finally” establish Crimea’s supposed status as part of Russia, and also parroted one of the authors of the amendments by claiming that they would make it impossible for Crimea’s ‘Russian status’ to be placed in question.

Mariani is also quoted by the Russian state-owned RIA Novosti criticizing ‘Europe’ for calling Crimea occupied territory and claiming that it was “the will of the Crimean people in 2014 to join Russia”.

Mariani does not seem to have been one of the motley bunch of far-right, extreme left or just pro-Kremlin politicians who were transported via Moscow to occupied Crimea as ‘observers’ of Russia’s pseudo-referendum on annexation, but he has certainly made up for that absenteeism since.  First in July 2015, then almost exactly a year later the politician, who has financial interests in Russia, headed so-called ‘delegations’’ of French politicians to Crimea.

If in 2015, Mariani simply repaid those funding his illegal visit, via Moscow, to Crimea by parroting the Kremlin on Crimea as historically ‘Russian territory’, etc, a year later he plummeted far lower..

He is reported to have said that “Europe’s preoccupation with the Crimean Tatars, while disregarding discrimination faced by the Russian-speaking population in the Baltic States testifies to the double standards surrounding its national minority policies”.  He also told French RT that “it is better to be a Tatar in Crimea than a Russian in Latvia. But Europe prefers to forget about it.”

After meeting with “the Crimean authorities” on 30 July, he asserted that “talk about a large number of people who have disappeared without trace and the infringement of the rights of Crimean Tatars in Crimea are propaganda”.

Mariani was speaking six months after Crimean Tatar human rights activist Emir-Usein Kuku and five other recognized Ukrainian political prisoners and Amnesty International prisoners of conscience were taken prisoner after an armed operation of extraordinary brutality.  The men all remain imprisoned, facing sentences of up to 19 years, for literally no crime.  His shameless lies came two months after Crimean Tatar activist Ervin Ibragimov was abducted from near his home in Bakhchysarai by men in traffic police uniform.

Mariani and his far-right cronies are now presented in the Russian state-controlled media as having come to Crimea to “observe” the referendum.

They certainly came to praise it. Mariani, for example, claimed that “organization of the voting in the Republic of Crimea was on a high organizational democratic level”, with RIA Novosti adding that all the other “members of the delegation expressed an analogous point of view”.   This is hardly surprising when such teams are made up of people who will express such views.  In this case,  According to Anton Shekhovtsov, the five French Rassemblement national or National Rally MEPs were Mariani ;Virginie Joron ; Herve Juvin ; Jean-Lin Lacapelle and  Philippe Olivier.

There are slightly varying reports as to who the four so-called ‘international experts’ were, although Gunnar Lindemann from the far-right German AfD was definitely present.  He was reported as dismissing western criticism of the massively rigged ‘referendum’.  He claimed that “the German parliament itself changes the Constitution when it needs to, without finding out the opinion of citizens. Of course the Russian variant seems more democratic”.

Russia has clearly funded the ‘observer missions’ of many of Lindemann’s colleagues and politicians from other far-right parties.  The European Platform for Democratic Elections [EPDE], for examples, quotes Stefan Keuter, also from the far-right AfD  as saying that his “personal view is that the level of organisation in Russia is higher even than in Germany”.

In a report entitled “Far-right European politicians to whitewash constitutional vote in Russia”, EPDE lists a number of the politicians whom Russia saw fit to bring in.  While in occupied Crimea, there was no choice, EPDE notes that “the Russian authorities  have explicitly not invited the international election observation mission of ODIHR-OSCE nor did they allow for domestic, non-partisan citizen election monitoring”.  EPDE’s recent calls to European national parliaments and to regional parliaments for stronger transparency regulations on the finances of parliamentarians and for respective changes to their Codes of Conduct can only be whole-heartedly endorsed.

It is probably true that the European Parliament can only distance itself from what individual elected representatives do.  The same, however, cannot be said of the European Endowment for Democracy (EED) which was established in 2013 by the EU and its member states “as an autonomous International Trust Fund to foster democracy”.

Mariani is taking part in lying about pseudo-elections on occupied territory and in denying the Russian human rights violations that prompted Freedom House to give occupied Crimea a ‘Not Free’ rating of just 8/100 in its annual report for 2019, not far above the result for North Korea.

This is not a question of freedom of opinion.  If Mariani was so publicly denying the Holocaust, for example, he would have long been removed from his position on the EED Board.  It is appalling that his open complicity with Russia in human rights and war crimes on occupied Ukrainian territory do not appear to disturb a structure which claims to be fostering democracy.