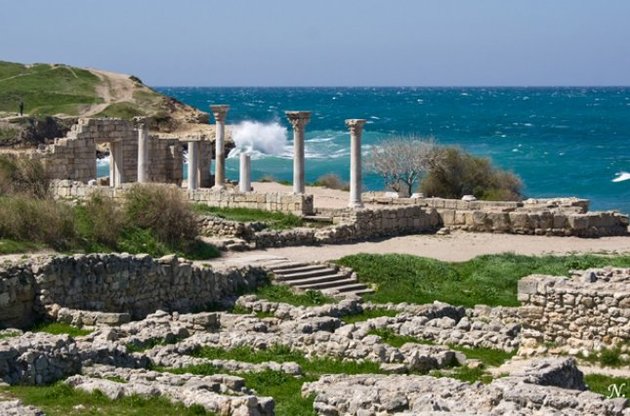 The Russian occupation authorities have resumed illegal excavations at Tauric Chersonese near Sevastopol, the site of an ancient city which is on the UNESCO World Heritage List. There are strong concerns about the physical damage Russia is doing to this priceless site in the absence of international monitoring.  The circumstances around the excavations suggest also that they are linked with Moscow’s efforts to stake out its supposed historical right to Crimea.

According to the Russian-loyal website New Sevastopol, the excavations have been initiated by the Russian Patriarchate’s Cultural Committee with financial support from a foundation entitled ‘My History’.  They are aimed, the head of the foundation’s board, Ivan Esin says, “at creating a map of archaeological zones which will be turned into museum exhibits and will form part of a project also including a museum of ancient Byzantine culture and a museum of Christianity”.  The excavations began earlier in the year but were suspended because of the pandemic.

Back in March, the same site reported “the most substantial archaeological find over recent decades”, saying that it had been made on the territory of military units adjacent to Chersonese. The ‘My History’ Foundation claimed to have found a cave city and hundreds of rare or unique artefacts. On 18 March, Russian President Vladimir Putin announced that the Russian defence ministry would be “freeing a part of its land” to extend the reserve land at Tauric Chersonese, with the land in question presumably that where the archaeological finds were made.

It is unclear how the land came to be considered Russian defence ministry property. In placing Ancient City of Tauric Chersonese and its Chora on the World Heritage List in 2013, UNESCO mentioned the dangers from expanding urban development and nothing at all about military units.  Under Russian occupation, more and more land has been ‘handed to Russia’s defence ministry’, and it is quite possible that any gesture by the ministry now is in returning what it should never have been ‘allocated’ in the first place.

All Russia’s excavations, ‘restoration’ work, etc. in occupied Crimea are illegal and are taking place without crucial surveillance and checks.  Like all UN and other international structures, UNESCO considers Russia to be illegally occupying Ukrainian Crimea, with Moscow making use of this situation to hide its crimes.  While officially claiming that anybody can visit and “see for themselves that all is well” in Crimea, the demands that any officials come as though to a part of Russia make any such visits impossible.

There have long been concerns about Russia’s treatment of Chersones, as well as its construction plans for the site.  Russia has no ancient history or monuments of its own, and is eager to appropriate such ‘heritage’ for itself in occupied Crimea.  The planned museum of Christianity is part of the narrative which Moscow, together with the Russian Patriarchate, are pushing about Crimea.  Russia’s link with the peninsula only really begins with its first land-grab in 1783, but it has long and aggressively sought to push back the clocks by almost a thousand years.  Back in 2014, Putin spoke of “sacred Crimea”, although without any real grounds.  As reported earlier, there is disagreement as to whether Volodymyr the Great was baptised in Chersonese or in Kyiv, but what was never in dispute before Russia’s invasion and annexation of Crimea was that the mass baptism that had marked the Christianization of Kyivan Rus in 988 had taken place in Kyiv.  This was recognized by the current Patriarch Kirill who, under Ukrainian President Viktor Yanukovych, made a point of coming to Kyiv for the festival celebrating this baptism.  This is unpalatable for adherents of ‘Russian world’ mythology, and it seems likely that the planned ‘museum of Christianity’ is really about pushing a different, more ‘Russian’, version of events.

During a visit to occupied Crimea in August 2019, Putin attended an elaborate event at Chersones, involving lights and special effects at the site of the ruins. The performance was probably based on a highly specific version of the history of Crimea and Chersonese written by Metropolitan Tikon (Shevkunov), who is described as being ex-communist and KGB agent Putin’s ‘confessor’.

There are no grounds for believing that the warnings issued about such barbaric abuse of a historic site have ceased to be relevant.  As reported, Anatoly Tumanov, who had earlier worked at the Tauric Chersonese museum complex, commented back in August 2019 that the museum was no longer being run by scholars, but by “some kind of people with the words ‘Russian Foundation – my history’ on their backs”.  He said that they did whatever they please and clearly had no idea of where they were.  As an example of their level, he pointed to the fact that they had propped metallic fencing against ancient walls.  In a Facebook post entitled ‘Save Chersonese!’ on 12 August, 2019, Albina Gayevskaya, another Sevastopol scholar, reiterated Tumanov’s concerns.  The lack of UNESCO monitoring, she believed, was enabling the management of the museum to carry out disastrous ‘reconstruction’ of the ruins of the ancient city without any obstruction and with impunity.  She was scathing about efforts to popularize the place, with little booths built where people can supposedly learn about its history and “incredibly ugly banners that look like gallows”.  They appeared to be trying to turn the place into something like a summer opera theatre or state, with tens or hundreds of metres of cables being stretched out over the territory of the monument for lighting, etc.  All of this was enabling them to make profit from events there, but the massive constructions were seriously threatening the integrity of the ruins.  She warned that UNESCO could remove the site’s world heritage status as a result.

Any major construction work at the site of Tauric Chersones, is prohibited, and all conservation measures need to be specified and agreed with UNESCO.  None of this has happened.

In May 2020, Ukraine finally ratified the Second Protocol to the Hague Convention of 1954 for the Protection of Cultural Property in the Event of Armed Conflict. This means that Ukraine can approach UNESCO for technical assistance in protecting places of cultural heritage and will also provide further instruments for organizing the monitoring and protection of such places on occupied territory.

According to Elmira Ablyalimova, the former Director of the Bakhchysarai Historical, Cultural and Archaeological Museum-Reserve, Article 9 of the Second Protocol is the only norm in international legal treaties which directly prohibits deliberate alteration of a site to destroy its real historical value.  Ratification of the document is not sufficient and Ablyalimova stressed that Ukraine must now introduce legislation to criminalize violations prohibited by the Second Protocol.  This will make it possible to hold proper court proceedings and to use these as proof of Russian violations of Ukraine’s cultural heritage at international political and court levels.