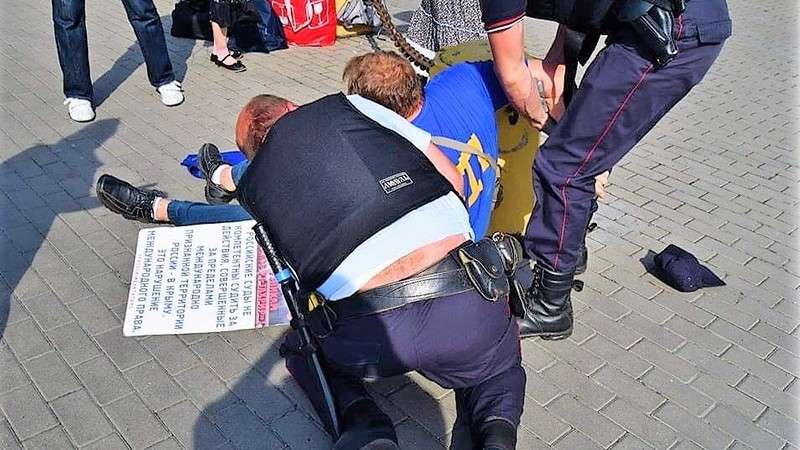 Vladimir Shypytsin could face a 5-year prison sentence after his Ukrainian flag knocked the cap off the police officer who was roughly trying to detain him for a perfectly peaceful picket on 18 July in support of Crimean Tatar political prisoners.  It is claimed that this was ‘violence against a representative of the authorities’, falling under Article 318 § 1 of Russia’s criminal code and carrying a possible sentence of up to five years’ imprisonment.

Shypytsin was released from detention the following day and it is possible that even Russia’s repressive machine will find this prosecution hard to carry through since there is a video making it quite clear that there was neither any intent to commit an act of force, or, in fact, any violence on his part at all.  This is not, however, guaranteed, since excessive measures were applied against six activists exercising the right to peaceful assembly that Russia’s Constitution officially upholds.  All six were held in custody overnight, and are facing administrative prosecution.  Shypytsin is also charged under Article 20.2 § 2 of the code of administrative offences (on organizing or holding what Russia calls an unauthorized public event).  So too are lyas Eshref; Asan Mumdzy; Dmitry Negodin; Tatyana Sichkareva and Olga Smirnova, however the latter are also charged under Article 19.3 of this same code with failing to obey a police officer.

Russian activists have been holding pickets in support of Crimean Tatar political prisoners and against repression in general in Russian-occupied Crimea since 2016.  The initiative is named ‘Strategy-18’, probably in memory of 18 May,  the anniversary and day of remembrance of the victims of the 1944 Deportation of the entire Crimean Tatar people from their homeland.  Activists usually come out on the 18th of each month in both Moscow and St. Petersburg, although the heavy-handed measures on 18 July were in Gatchina, the Leningrad oblast.

These are totally peaceful pickets which even Russia’s repressive anti-protest laws have not banned.  The activists stand with banners reading, for example, “We demand an end to terror against the Crimean Tatars”; “Russian courts are not competent to try people for actions outside the internationally recognized territory of Russia – in Crimea. This is a violation of international law.”; “Looking for Islamic terrorism in Crimea is a method of punishing dissidents.  Free all those arrested on ‘Hizb ut-Tahrir’ charges”.

Of almost 100 Ukrainian political prisoners held in Russia or occupied Crimea, the majority are Crimean Tatars.  Russia is particularly using illegal charges of involvement in Hizb ut-Tahrir, a peaceful organization which is legal in Ukraine, but banned in Russia, as a weapon against Crimean Tatar civic activists and journalists.  Since Russia is also the only country in the world to have called Hizb ut-Tahrir ‘terrorism’, the charges are also used as a propaganda tool to treat Crimean Tatars, as ‘terrorists’.  The majority of Crimean Tatars opposed Russia’s annexation of Crimea, and it is very clear that Moscow is using terror and intimidation to drive as many Crimean Tatars out of occupied Crimea as it can.

It takes courage in today’s Russia to come out on pickets with the Ukrainian and Crimean Tatar flags and with messages condemning Russian repression and spelling out that Crimea is internationally recognized as occupied Ukrainian territory.

The list here is, unfortunately, already out of date, but gives some idea of the scale of repression under Russian occupation.